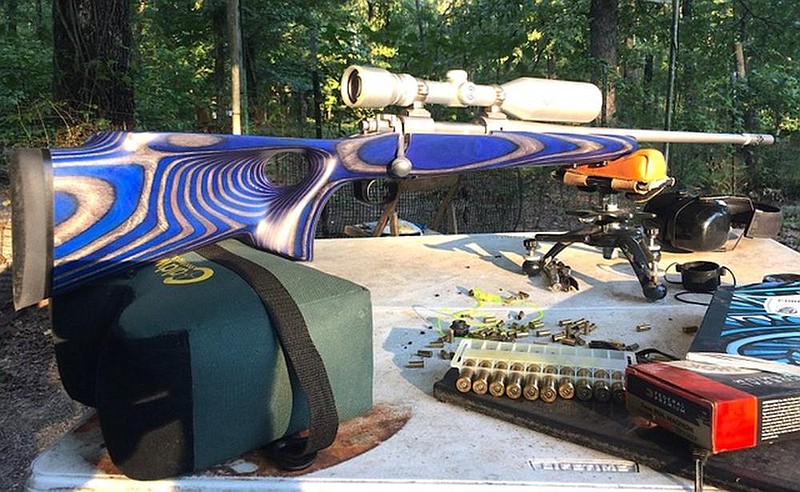 This is a story about fishing on War Eagle Creek, but first a few words about range testing the 7mm Remington Magnum.

Actually, I range tested one 7mm Remington Magnum, a Winchester Classic Model 70 Stainless Stalker that I bought many years ago. It has Winchester's reworked pre-1964 controlled round feed action with Winchester's signature conical breech. The combination of controlled round feed and the conical breech virtually eliminate misfeeds and jams because no matter the angle when you cycle the bolt, the coned breech will always guide the cartridge into the chamber.

Ruger and Kimber use controlled round feed, but they have flat breech faces which introduce the possibility of a bullet tip hitting a dead end when cycling. In all the years I have used Ruger, Remington, Savage, CZ and others, that has never happened, but the possibility exists.

The rifle also came with a Simmons Aetec 2.8-10x44 scope with a stainless finish. Its aspherical lenses are like camera and telescope lenses and are simpler than the cylindrical lenses of conventional rifle optics. This is a relic from the days when Simmons was part of the ATK, which makes telescopes and military optics. The Aetec was considered a highly advanced optic when it was introduced in 1994, and several of my rifles still wear them, but the Aetec never gained much traction against premium brands like Leupold and even Burris and Redfield, which were major players 30 years ago.

Aetec was distinctive in that its magnification powers are true. That is why sight pictures through an Aetec appear bigger than they do with other scopes at equal magnifications.

The Aetec's disadvantages are that, like a camera lens, it does not collect light well in low-light situations. It also has short eye relief.

Sealing that deal was the BOSS, or Ballistic Optimizing Shooting System. It is an adjustable weight that Winchester and Browning used on some models for a short time. It allows you to tune the barrel oscillation so that the muzzle is in the center of the sine wave at the instant the bullet exits the bore.

Barrel harmonics differ for every bullet. First you must determine the "sweet spot" for each brand and weight bullet, and then you must tune the BOSS up or down to narrow the groups. It works very well, but it requires a lot of shooting. Hunters that shoot one box of ammo every five years kept the BOSS at a static setting and then complained that their rifles wouldn't shoot.

Part of the BOSS is a muzzle brake that reduces recoil and muzzle jump.

Two weeks ago, Adam Ratcliffe of Bentonville invited me to join him and some friends for a float fishing trip on War Eagle Creek. I couldn't go, but I lived it vicariously through the photos Ratcliffe sent by text message, including one that showed a smallmouth about 19-20 inches long. For creek fishing, Ratcliffe and I use the same tackle, lures and tactics, so I envisioned every cast. I felt the thump of each strike, and I heard the buzz of the reel releasing drag under the strain of a big fish.

Ratcliffe invited me to fish a different stretch of the War Eagle on July 18, but the thought of leaving my driveway at 2:30 a.m. for a 6 a.m. meeting practically gave me hives.

"Even in my Superman days I couldn't have pulled that off," I texted.

Instead, I spent the weekend at my shooting bench in asphyxiating heat and humidity reacquainting myself with this forgotten Model 70.

My first session with this rifle occurred when I bought it. Using a simple Lee Loader, I assembled several loads. One contains 160-gr. Speer Boat Tails powered by 59 grains of IMR-4831 and Remington Large Rifle Magnum primers. Even with its cheap factory "Tupperware" stock, the rifle printed a three-shot. .47-inch group at 150 yards. The BOSS sweet spot was 8.

Winchester advertised the rifle as being "glass bedded." The "bedding" is merely a small amount of clear epoxy in the recoil lug. Several years ago I replaced the stock with a stiff Stocky's laminated thumbhole model. I sanded and beveled the barrel channel to ensure that it fit inside evenly with no pressure points. I also had to purchase a new one-piece floor plate and trigger guard to replace the two-piece original. The stock's alternating layers of bright blue and gray, offset by the rifle's stainless barrel and action, are stunning to behold, especially in bright sunlight.

On July 19, with the BOSS still at 8, it printed a .461-inch, three-shot group 41/2-inches high with the aforementioned Speer load.

The second load contains 150-gr. Sierra GameKing with 64.5 grains of Reloder-22 and Remington Large Rifle Magnum primers. That is a maximum load in the Sierra Reloading Manual, and I labeled it HOT. According to the manual, that load produces a muzzle velocity of 3,200 feet per second through a 24-inch Krieger barrel. My barrel is 24 inches. The muzzle brake extends it to 26, but it bleeds off a percentage of the pressure. I can replace the muzzle brake with a conventional recoil attachment and get the partial benefit of a 26-inch barrel. With the brake, my average muzzle velocity was "only" 2,913 fps, with no signs of excessive pressure.

With the BOSS at 3.5, three shots printed .44 inch. I got greedy and fired a fourth shot hoping to make a ragged hole, but I twitched and sent it high and right to widen the group to .794-inch. That group was three inches high.

That is not a piney woods rig, but if I ever need to reach out and touch something across a beanfield, powerline or prairie, that rifle will be my huckleberry.

On Sunday July 19, Ratcliffe texted to say that the previous day's float on the War Eagle was a bust. He caught a few small Kentucky bass but not one smallmouth.

"I'll join you when it gets a little cooler," I replied. Then I texted Ratcliffe photos from the shooting session.

Ratcliffe, a fellow gun enthusiast, was much more interested in talking about that. 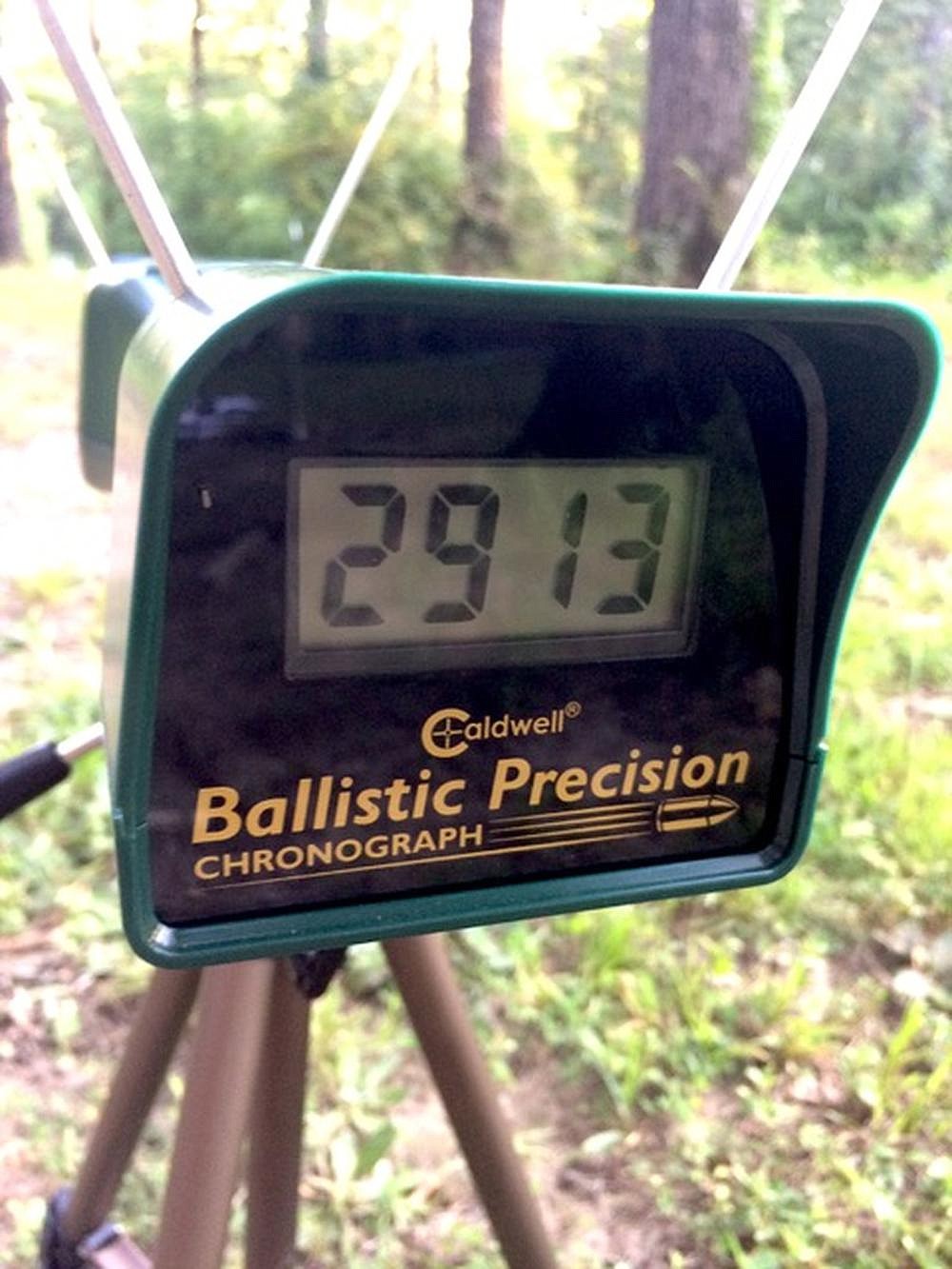 The average muzzle velocity for the author’s “hot” loads was 2,928 feet per second, considerably less than the 3,100 fps listed in the Sierra Reloading Manual. (Arkansas Democrat-Gazette/Bryan Hendricks) 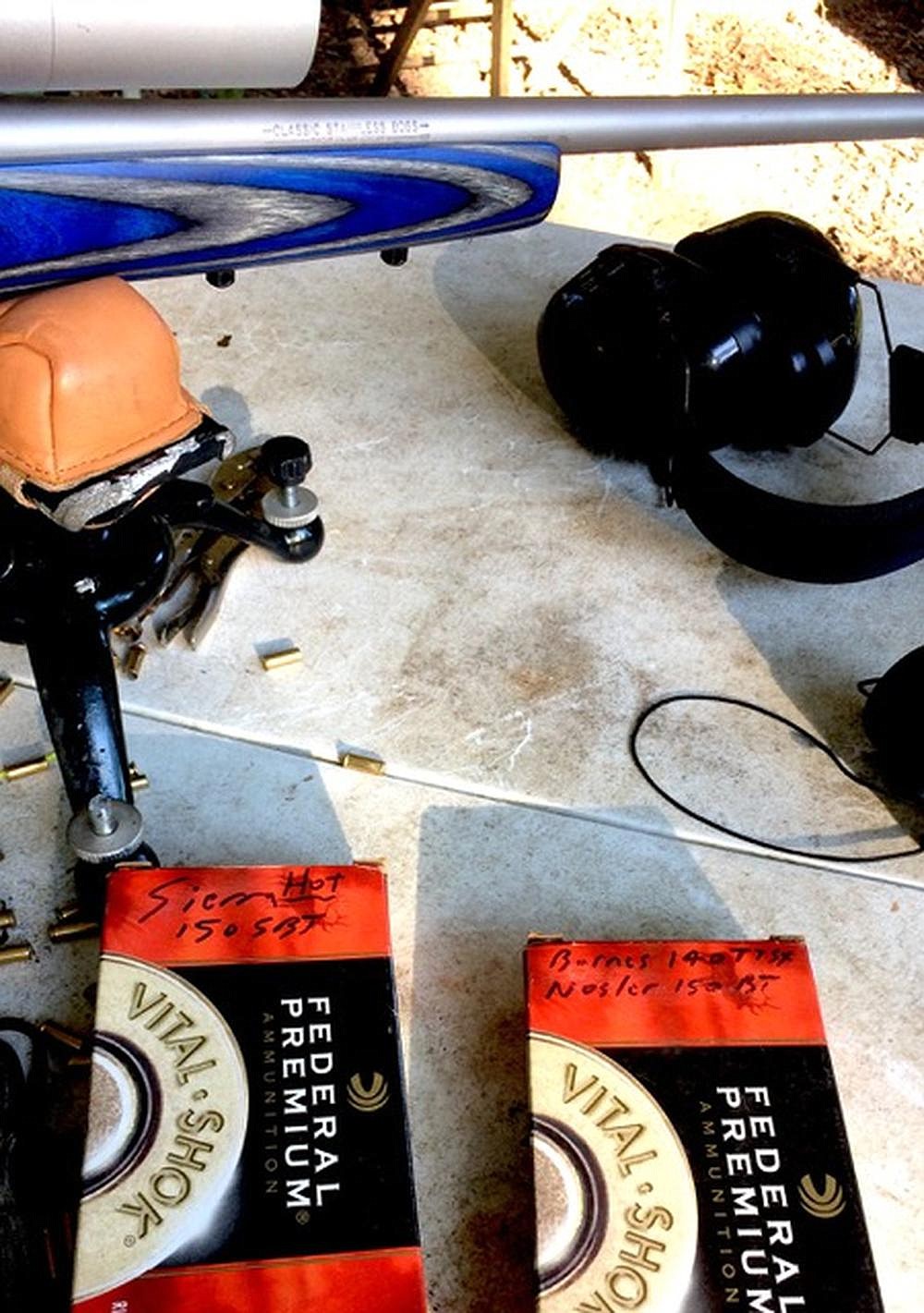 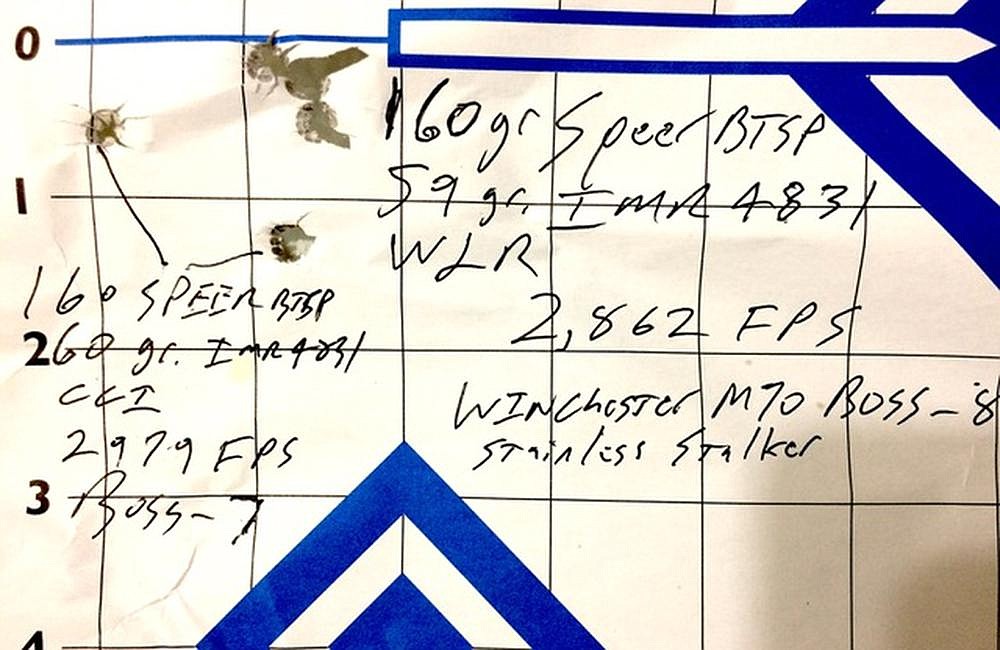 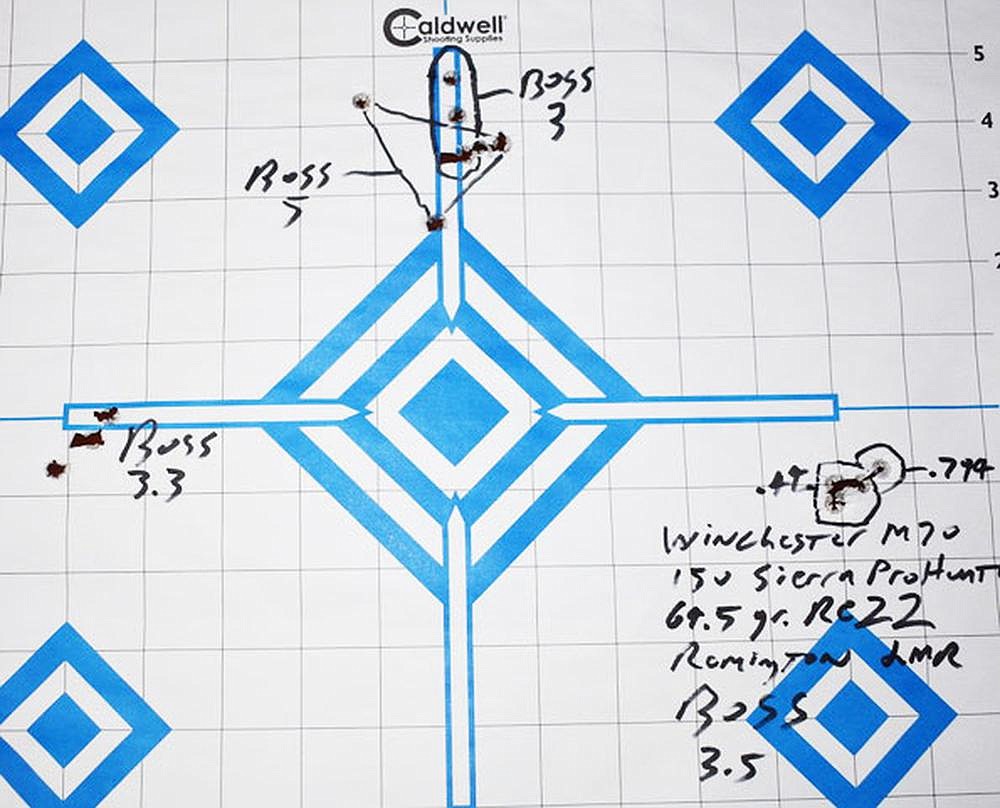