State’s prep sports should use caution 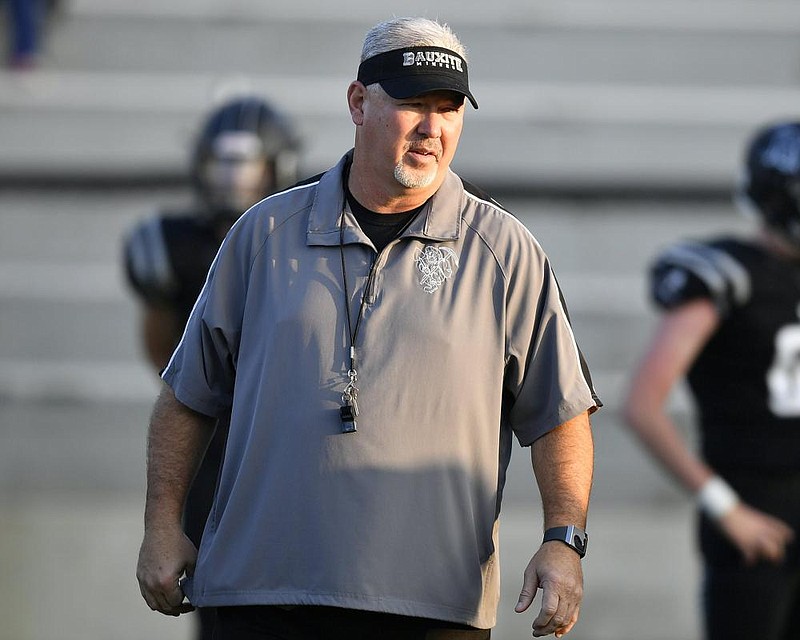 Little Rock Southwest Coach Darryl Patton said it is going to be difficult for teams to begin play during the coronavirus pandemic because so many variables are in place. “I don’t think it’s a matter of if kids get it, it’s a matter of when,” he said. (Special to the Democrat-Gazette/Jimmy Jones)

I've passed many times produce stands near the side of the road with people hawking fruits and vegetables, ceramics and pottery, and even kittens and puppies.

But I had never until recently passed a stand where a woman sold masks and face shields, homemade and machine washable, according to her advertisement.

A sign of the times, unfortunately, during the coronavirus pandemic.

The battle against the disease in Arkansas intensified Monday on the first day of a statewide mask mandate by Gov. Asa Hutchinson. Hutchinson presented a graph at his coronavirus press briefing that showed Arkansas leading all but one of its neighboring states (Mississippi) in the number of hospitalizations per 100,000 people.

So, how can we possibly expect schools to open and for fall sports in Arkansas to continue as schedule? I am among the least qualified to answer the question but I know to trust the scientist and doctors, especially the directives from the Arkansas Department of Health.

If they say 'go', we go. If they say 'stop' after we go, then we stop. But anything close to a return to normalcy must include some on-campus learning and athletics with strict adherence to guidelines from the Arkansas Department of Health and the Arkansas Activities Association.

"Right now, we can't hit bags, we can't hand off the football, we can't do 7-on-7 with helmets on and we need to move into the next phase to find that out," Springdale Har-Ber Coach Chris Wood said about acquiring data from team sports. "We've got to be data-driven and the only way we know is by looking at the numbers. We won't know until we cross that bridge."

The second option is one of the concerns I heard from Little Rock Southwest Coach Daryl Patton during a recent podcast. No one is more eager to hit the field than Southwest, a new school that merged together students from Little Rock Fair and Little Rock McClellan. But a handful of teams in Arkansas have stopped workouts after players tested positive for covid-19, and Rogers shut down junior high workouts for two weeks after a ninth-grader tested positive for the disease.

"I don't think it's a matter of if kids get it, it's a matter of when," said Patton, who formerly coach at Fayetteville and led the Bulldogs to multiple state championships in football. "It's going to be very tough to start playing in the fall because there's too many questions and variables out there that there are no answers for. I don't want to start then two weeks into it, we have to sit out for two weeks, come back, then sit out two weeks again."

Nowhere is high school football bigger than in the state of Texas, where nearly 1,300 teams take the field each fall. Football is so big in Texas that its championship games are played at AT&T Stadium, home of the Dallas Cowboys.

The governing body for high school sports in Texas -- the University Interscholastic League -- announced football season for the largest schools in the state will be pushed back to Sept. 24 while the smaller schools will continue as scheduled. This seems like a reasonable plan, especially for those highly populated areas where covid-19 is raging.

Texas' decision will affect teams in Arkansas like Springdale Har-Ber, which will play Jenks, Okla., instead of opening the season at McKinney, Texas, on Aug. 28. Expect more adjustments, including the possibility teams in Arkansas will be allowed to play conference games only. But even a reduced schedule for football is better than no football like in California, which already announced all fall sports will be delayed until December or January. That means football playoffs in California won't be completed until late April and state tournaments for high school basketball will stretch until mid-June.

That decision could lead to even more problems with jumbled schedules and unfairly harm athletes who play multiple sports.

A return to normalcy begins with school openings and athletics this fall. If Plan A is unattainable, have Plan B and Plan C ready to go. Let the data be the guide on how to move forward.