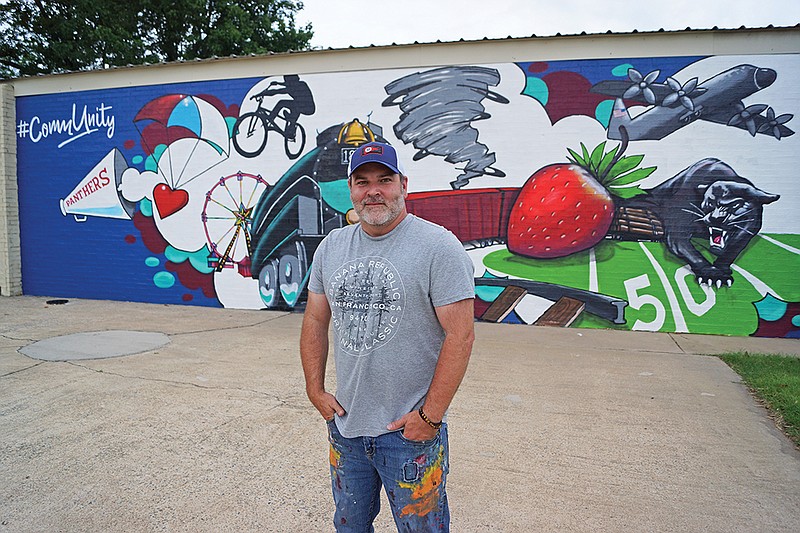 Muralist Jason White was recently hired by Unity Health to paint two murals in Cabot and two in Newport. He said he wanted to paint the murals because of the correlation and positivity that art brings to a community. (Three Rivers Edition / Jennifer Ellis )

Ever since he was 5 years old, Jason White knew he wanted to be an artist. He said that at times, he would try to draw Bugs Bunny because art was a passion for White.

“Even back then, I knew it and loved it,” he said, “but I was robbed of that blessing because of the fear of not knowing if I could make it as an artist and provide for my family.”

He said that about six years ago, he was doing some window paintings for First Security Bank in Bentonville, and he said, “I just felt like the Lord said it was time to do this full time.”

“I immediately put in my two weeks’ notice, and once it was up, my boss called me and asked me to illustrate a children’s book he had written,” White said. “Later, I shot a time-lapse video of me doing another window painting, and it was picked up by Razorback Nation on their Facebook page, and the video got 40,000 views.

“It was a combination of those two things that confirmed that this is what I am supposed to be doing.”

Recently, White was hired by Unity Health to paint two murals in Cabot and two murals in Newport. He said the initial plan was to work with students at the school, including seniors who were going to graduate, but after the schools were shut down as a result of COVID-19, he said, it didn’t feel like it was safe to be that close together. He said he ended up designing and painting a mural himself, but he hopes to later get a lot more community involvement in painting murals.

He said some of the reasons he wanted to be involved and paint the murals were the correlation and positivity that art was bringing to the community and the art’s positive effect. The first mural, which has already been completed, is at the McGue Law Firm, 301 W. Main St. in Cabot. White said the mural encompasses all things Cabot, featuring a Cabot Panther, a large strawberry and a megaphone that guests can interact with as a backdrop for photos.

“We have built a strong relationship with Unity Health over the years,” said Amy Williams, president and CEO of the Cabot Area Chamber of Commerce. “We are excited that they chose Cabot to invest by way of mural projects, as they already have a strong footprint in our community.

“The McGue family was gracious enough to let us use their building as well. The #commUnity mural will only add to the future of art in Cabot.”

White is from Searcy and has been involved with the art movement there, creating works the art alley where multiple murals are painted. He said he also painted the mural that was designed by Tara Peacock for the Hulu show Small Business Revolution. He said the art movement has been fascinating and has really picked up momentum.

White said the first mural in Cabot took a few days over the course of a couple of weeks to complete because of the weather. He said the second mural in Cabot will feature a giant American flag near the City Hall building as a thank-you to active military personnel and veterans.

“We definitely acknowledge the power and healing of art and how it brings people together,” said Brooke Pryor, director of marketing for Unity Health. “We recognized a need to do something to brighten up the area near downtown with some fun, community-driven art.”

Pryor said she was familiar with the quality of White’s work, so the two of them started working with the Cabot Chamber for concepts and ideas and ways to represent the community. She said she believes murals inspire people because the artworks give viewers a fresh look at an old building and can feel like a rebirth of a certain area.

“For Newport, we are hoping to brighten up their downtown area,” she said. “[One mural] will feature an image of the White River monster, which is a legend in the Newport area, so we hope to have fun with that.

“Our marketing director for Unity Health in Newport has been really engaged with that process. She knows the community and knows what they want to see. It is going to be a great project in that area as well.”

White said he recently painted a different mural, outside of the Unity contract, in Newport for one of the local swimming pools, and the work featured an under-the-ocean scene with a diver, a mermaid, sharks and whales.

Jon Chadwell, executive director for the Newport Economic Development Commission, said the murals will be painted on some older, more historic buildings that are currently being revitalized and remodeled. Chadwell said the commission is working with White on what exactly is required but is hopeful the buildings will be ready within the next 30 days.

“People are coming to appreciate public art and how it makes us feel about ourselves as a community,” Chadwell said. “They are a lot more open to the idea than 10 or 15 years ago, when they might have questioned why we were spending money on public art.”