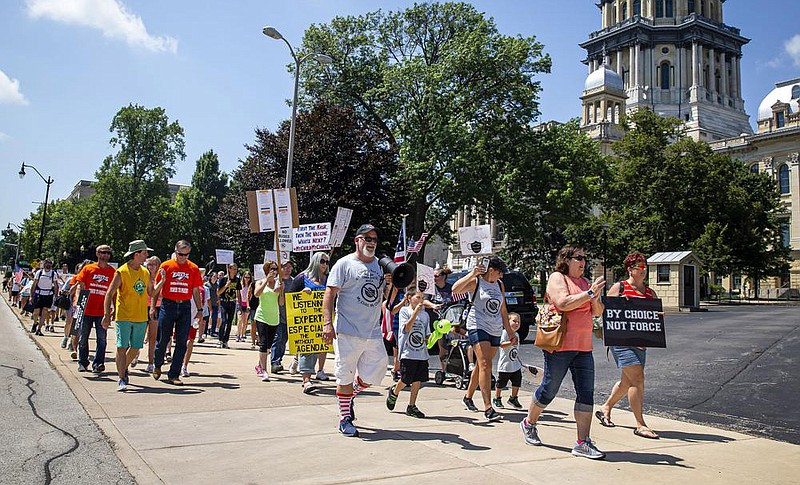 Michael Rebresh, an organizer of a “Million Unmasked March,” leads protesters toward the Illinois State Board of Education at the state Capitol in Springfield on Saturday. The marchers gathered in front of a statue of Abraham Lincoln to express opposition to guidelines that children be required to wear masks when they return to school. (AP/The State Journal-Register/Justin L. Fowler)

On Saturday, Florida jumped ahead of New York in confirmed cases of covid-19, according to the Centers for Disease Control and Prevention data, after the Sunshine State reported another 12,199 infections.

The need for more health care workers is especially dire for front-line nurses, respiratory therapists and others who play hands-on, bedside roles where one nurse is often required for each critically ill patient.

While many hospitals have devised ways to stretch material resources -- converting surgery wards into specialized covid units and recycling masks and gowns -- it is far more difficult to stretch the human workers needed to make the system function.

"At the end of the day, the capacity for critical care is a balance between the space, staff and stuff. And if you have a bottleneck in one, you can't take additional patients," said Mahshid Abir, a senior physician policy researcher at the RAND Corp. and director of the Acute Care Research Unit at the University of Michigan. "You have to have all three. ... You can't have a ventilator, but not a respiratory therapist.

"What this is going to do is it's going to cost lives, not just for covid patients, but for everyone else in the hospital," she warned.

Hospitals are teeming across large parts of the country. More than 8,800 covid-19 patients are hospitalized in Texas; Florida has more than 9,400; and at least 13 other states also have thousands of hospitalizations, according to data compiled by The Washington Post.

Facilities in several states, including Texas, South Carolina and Indiana, have in recent weeks reported shortages of such workers, according to federal planning documents viewed by The Post, pitting states and hospitals against one another to recruit staffing.

Florida says 414,511 people have been diagnosed with the disease, placing it No. 2 in the nation and now in front of New York State and its 406,506 cases. California leads the way with 425,616, cases based on the COVID Data Tracker from the CDC.

Health departments in the three states also are reporting similar data that confirm Florida has vaulted over New York for known cases.

The United States has had more than 146,000 deaths and more than 4.1 million confirmed cases as of Saturday.

"Even if for some strange reason ... you don't care about covid-19, you should care about that hospital capacity when you have an automobile accident or when you have your heart attack or your stroke, or your mother or grandmother has that stroke," Edwards said at a news conference.

In Florida, 39 hospitals have requested help from the state for respiratory therapists, nurses and nursing assistants.

In South Carolina, the National Guard is sending 40 medical professionals to five hospitals in response to rising cases.

Many medical facilities anticipate their staffing problems will worsen, according to the planning documents. Needs range from pharmacists to physicians.

"We missed the boat," said Serena Bumpus, a leader of multiple Texas nursing organizations and regional director of nursing for the Austin Round Rock Region of Baylor Scott and White Health.

Bumpus blames a lack of coordination at national and state officials. "It feels like this free-for-all," she said, "and each organization is just kind of left up to their own devices to try to figure this out."

In a disaster, a hospital or local health system typically brings in help from neighboring communities. But that standard emergency protocol, which comes into play after a hurricane or tornado, "is predicated on the notion that you'll have a concentrated area of impact," said Christopher Nelson, a senior political scientist at the RAND Corp. and a professor at the Pardee RAND Graduate School.

That is how Texas has functioned in the past, said Jennifer Banda, vice president of advocacy and public policy at the Texas Hospital Association, recalling the influx of temporary help after Hurricane Harvey deluged Houston three years ago.

It is how the response took shape early in the outbreak, when health care workers headed to hard-hit New York.

But the sustained and far-flung nature of the pandemic has made that approach unworkable. "The challenge right now," Banda said, "is we are taxing the system all across the country."

Theresa Tran, an emergency medicine physician and assistant professor of emergency medicine at the University of Houston's Baylor College of Medicine, began to feel the crunch in June. Only a few weeks before, she had texted a friend to say how disheartening it was to see crowds of people reveling outdoors without masks on Memorial Day weekend.

Her fears were borne out when she found herself making call after call after call from her emergency room, unable to admit a critically ill patient because her hospital had run out of intensive-care-unit space, but unable to find a hospital able to take them.

Under normal circumstances, the transfer of such patients -- "where you're afraid to look away, or to blink, because they may just crash on you," as Tran describes them -- happens quickly to ensure the close monitoring that ICUs afford.

Those critical patients begin to stall in the ER, stretching the abilities of the nurses and doctors attending to them. "A lot of people, they come in, and they need attention immediately," Tran said, noting that emergency physicians are constantly racing against time. "Time is brain, or time is heart."

By mid-July, an influx of "surge" staffing brought relief, Tran said. But that was short-lived as the cases jumped from one locality to the next, with the emergency procedures to bring in more staffing never quite keeping up with the rising infections.

One of the root causes of the problem in the United States is that emergency departments and ICUs are often operating at or near capacity, Abir and Nelson said, putting them dangerously close to shortages before a crisis even hits.

Texas, along with 32 other states, has joined a licensure compact, allowing nurses to practice across state borders, but it is becoming increasingly difficult to recruit from other parts of the country.

Texas medical facilities can apply to the Department of State Health Services for staffers to fill a critical shortage, typically for a two-week period. But two weeks, which would allow time to respond to most disasters, hardly registers in a pandemic, so facilities have to ask for extensions or make new applications.

South Carolina last week issued an order that allows nursing graduates who have not yet completed their licensing exams to begin working under supervision. Prisma Health, the state's biggest hospital system, said this week that the number of patients admitted to its hospitals has more than tripled in the past three weeks and is approaching 300 new patients a day.

More important than the size of the next relief package is how long the emergency measures last, given the vast number of Americans now unemployed, the former Obama and Clinton administration official said in an interview on "Bloomberg Wall Street Week."

To Summers' point, Trump administration officials, including Treasury Secretary Steven Mnuchin and White House Chief of Staff Mark Meadows, were on Capitol Hill on Saturday for talks on the next stimulus bill.

"We had a productive meeting on the staff level working through the final documents, just finishing everything," Mnuchin told reporters.

Summers, a paid contributor to Bloomberg, spoke after U.S. jobless claims rose last week for the first time since March, the clearest sign yet of a pause in the economic recovery.

"I personally doubt what I think is the market's view, which is that we're going to have most people vaccinated and life returning to normal, sometime by spring of next year," Summers said.

A growing body of evidence indicates America's rebound is stalling, days before hundreds of billions of dollars' worth of federal aid is set to expire. It could be weeks before the next round of stimulus is completed; talks are expected to continue this weekend.

Millions of Americans have been kept afloat financially by supplemental unemployment checks that end this month unless there's congressional action.

Elsewhere, France's coronavirus infection rate crept higher Saturday, and Spain cracked down on night life, but German authorities were confident enough to send a cruise ship out to sea with 1,200 passengers for a weekend test of how the cruise industry can begin to resume.

The ship set sail for the first time since the industry was shut down. "Mein Schiff 2" sailed from the port of Hamburg toward Norway on Friday night, and passengers will spend the weekend at sea with no land stops before returning to Germany on Monday. The ship's normal capacity is 2,900.

French health authorities said the closely watched "R" gauge is now up to 1.3, suggesting that infected people are contaminating 1.3 other people on average. That means the virus still has enough victims to keep going instead of petering out.

France's daily new infections are also rising -- up to 1,130 on Friday. Health authorities warned that the country is going backward in its battle against the pandemic, which has already killed at least 30,195 people in the country and that infection indicators now resemble those seen in May, when France was coming out of its strict two-month lockdown.

In Spain, Catalonia became the latest region to crack down on night life, trying to tamp down new infection clusters. The wealthy northeast region home to Barcelona ordered all nightclubs to close for 15 days and put a midnight curfew on bars in the greater Barcelona area and other towns around Lleida that have become contagion hot zones.

Spain has reported more than 900 new daily infections for the past two days as authorities warn that the country that lost more than 28,000 lives before getting its outbreak under control could be facing the start of a second major outbreak.

Despite the concerns, some European countries kept up their gradual reopenings Saturday.

Swimming pools and gyms in England were back in business as public health officials extolled the benefits of exercise in fighting covid-19. Britain announced a fresh attack on obesity as part of the move, hoping that a fitter nation might be able to minimize the impact of future waves of the virus.

South Korea on Saturday reported more than 100 new coronavirus cases for the first time in four months. The 113 new cases included 36 workers returning from Iraq and 32 crew members of a Russian freighter.

Worldwide, about 16 million infections and more than 643,000 deaths have been reported, according to data compiled from government announcements by Johns Hopkins University.

Information for this article was contributed by Frances Stead Sellers, Abigail Hauslohner, Jacqueline Dupree and Lena H. Sun of The Washington Post; by Yueqi Yang of Bloomberg News; by John Leicester of The Associated Press; and by Marc Freeman of the [Florida] Sun Sentinel. 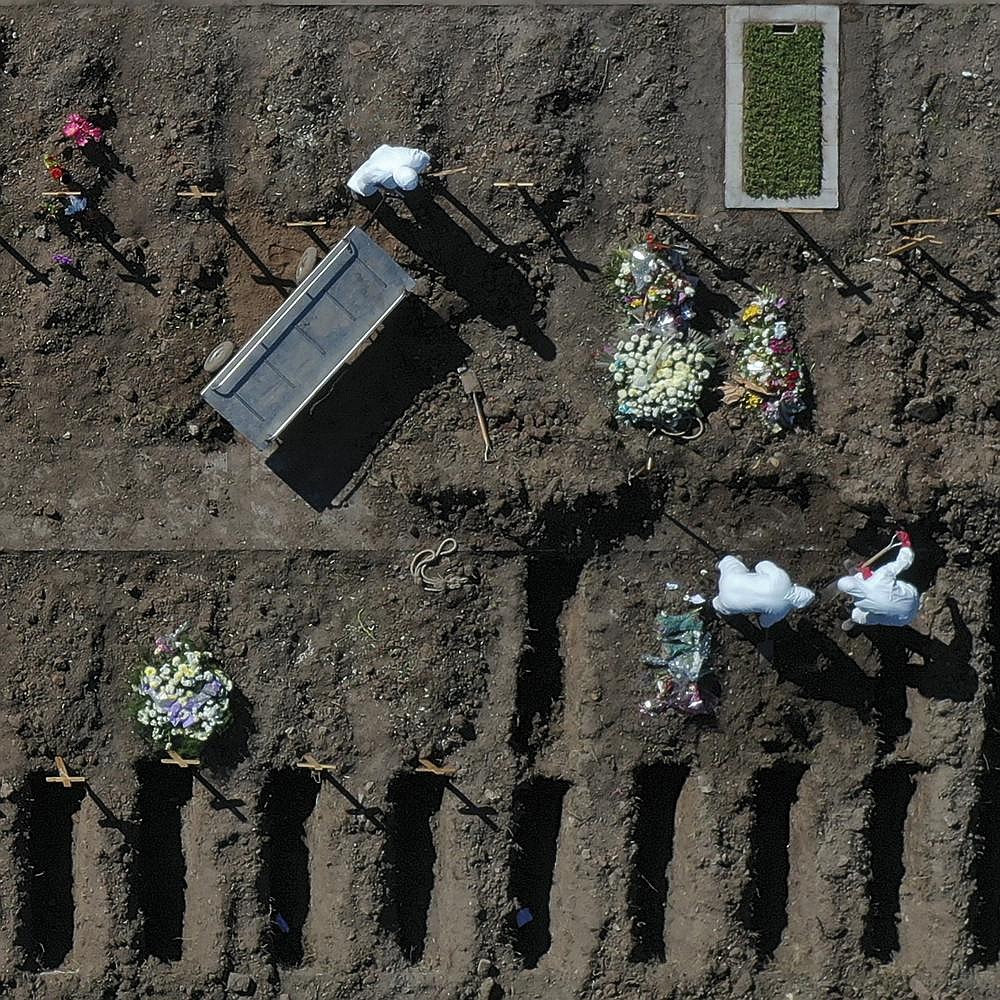