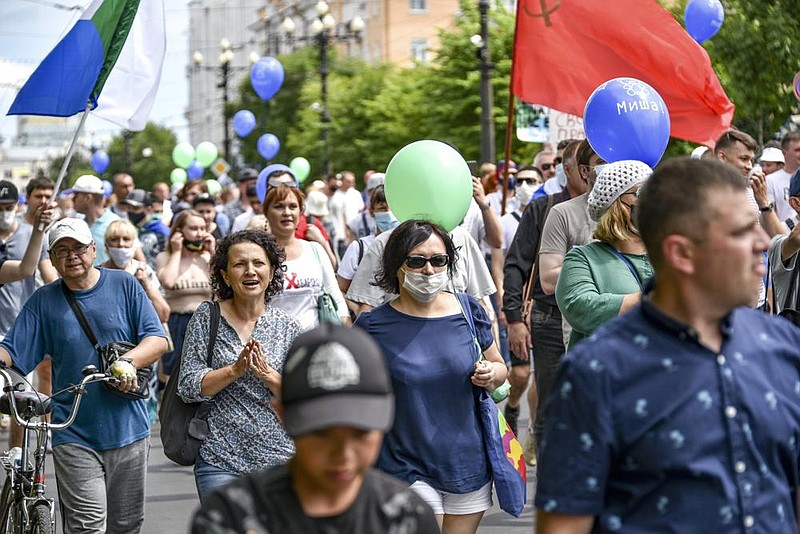 Marchers fill the streets in Khabarovsk, Russia, as people turn out again Saturday to protest the arrest of the governor of the Khabarovsk region. More photos at arkansasonline.com/726khabarovsk/ (AP/Igor Volkov)

KHABAROVSK, Russia -- Protests in Khabarovsk, a city 4,000 miles east of Moscow, drew tens of thousands of people Saturday for a 3-mile march through central streets for the third-straight week.

Residents were rallying in support of a popular governor arrested and spirited to Moscow this month -- but their outpouring of anger, which has little precedent in post-Soviet Russia, has emerged as stark testimony to the discontent that President Vladimir Putin faces across the country.

Putin won a tightly scripted referendum less than four weeks ago that rewrote the constitution to allow him to stay in office until 2036. But the vote was seen as fraudulent by critics and many analysts.

"When a person lives not knowing how things are supposed to be, he thinks things are good," said Artyom Aksyonov, 31, who is in the transportation business and who was handing out water from the trunk of his car to protesters under the baking sun in Lenin Square, on the protest route. "But when you open your eyes to the truth, you realize things were not good. This was all an illusion."

[Video not showing up above? Click here to watch » https://www.youtube.com/watch?v=ZH2eObcaIhg]

Across Russia, fear of being detained by the police and the seeming hopelessness of effecting change has largely kept people off the streets. Many Russians also say that whatever Putin's faults, the alternative could be worse or lead to greater chaos.

Partly as a result, Putin remains firmly in control. And independent polling shows he still enjoys a 60% approval rating, though the figure has been falling.

But the events in Khabarovsk have shown that the well of discontent is such that minor events can ignite a firestorm. The weekend crowds have been so large that the police have not tried to control them -- even though the protesters did not have a permit, let alone a clear leader or organizer.

Khabarovsk, a city of 600,000 close to the eastern terminus of the Trans-Siberian Railway and the Chinese border, had not seen any protests of much significance since the early 1990s. That changed after July 9, when a tactical team dragged the governor, Sergei Furgal, out of his car and whisked him to Moscow on 15-year-old murder accusations.

Khabarovsk social media forums lit up in indignation over an arrest that looked like a Kremlin move to eliminate a young and well-liked politician who had upset an ally of Putin in the regional election in 2018.

Tens of thousands spontaneously poured into the streets on July 11 as residents called for protests online, and they reemerged in greater numbers on July 18. Smaller-scale marches through the city continued daily.

Russian journalists who have been following the protests since the beginning said Saturday's crowds were the biggest yet. Opposition activists estimated that 50,000 to 100,000 had turned out. City officials said that about 6,500 people had attended, clearly an undercount.

Putin last Monday appointed a 39-year-old politician from outside the region, Mikhail Degtyarev, as the acting governor of the Khabarovsk region, angering residents further. Asked whether he would meet with the protesters, Degtyarev told reporters that he had better things to do than talk to people "screaming outside the windows."

The Kremlin appears determined to wait the protests out. The regional authorities have warned that they could worsen the spread of the pandemic, announcing Saturday a sharp rise in coronavirus infections.