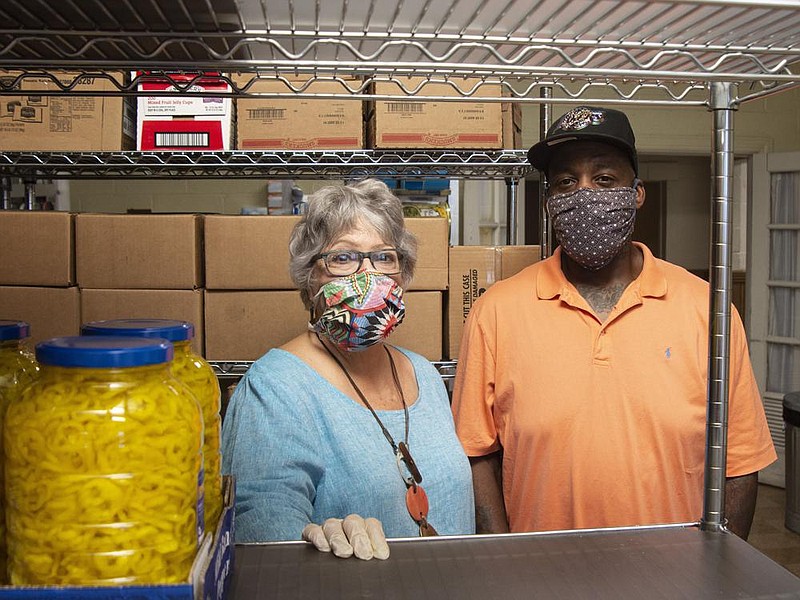 Nancy Howell, board chairwoman of the Stewpot, stands in the storeroom with Stewpot employee Ed Brown. The daily feeding program for those in need is housed in a Presbyterian church, but, says Howell, “I like that a lot of different groups and churches are involved in it.” (Arkansas Democrat-Gazette/Cary Jenkins)

And fed they are ... from noon to 1 p.m. Monday through Friday, as always. Due to covid-19, however, the logistics have just been a little different, says Howell, who's board chairwoman of the Stewpot. The 48-year-old anti-hunger program operates on the second floor of First Presbyterian Church in downtown Little Rock.

Before, Stewpot's volunteer groups -- some 20 around town, Howell says -- would cook, then serve, hot meals in the dining area. Now, they prepare 125-150 sack lunches in the dining room. These meals are distributed outside by Ed Brown, Stewpot's one full-time employee and the dining-room manager, and his helpers.

On a recent Thursday, Howell sits in Stewpot's dining room. Tables are laden with boxes of supplies and brown paper bags set up for the next day's meal.

"All of our volunteers were older than they needed to be to safely be doing this," Howell says. "We just had to restructure and say, 'If you feel comfortable, these are the things we're going to do differently.' So we made the decision to do grab and go, rather than in-service [dining], because we couldn't do that. ... We just had to make everything safe.

"The diners have never missed one meal."

A longtime volunteer, Howell became involved with Stewpot about five years ago through her membership at west Little Rock's Trinity Presbyterian Church. Trinity volunteers served at Stewpot every other Monday. "So I thought, 'Well I can do that,'" recalls Howell. "I was tired of committees and all that. I just wanted to do something."

After serving for about three months, Howell found herself cooking. "I have had restaurant and catering [experience], so it was kind of a natural thing," she says.

After a year or two, Howell was asked to be on the Stewpot board. She went on to serve as vice chairwoman and, for the last year and a half, has led the board. "It just worked out that I was the chairperson when all this happened."

"The notes from the March 4 [board] meeting are really a hoot," Howell says. "The last sentence said, 'Let's talk about things we might have to modify.' We should have said, 'Dot-dot-dot -- everything.'"

Howell gives a lot of credit to Brown, who has been with Stewpot for eight years, for keeping the mission going throughout the pandemic. "He and I had to sort of make a pact, if you will." The sack meals were going to have to be carried down an extra flight and a half of stairs from Stewpot's dining room ... neither feasible nor safe for the mostly-older volunteers.

While preparing and assembling the meals, the volunteers practice as much caution as possible.

"We have masks, we have gloves, we have sanitizer, we have everything," Howell says. "And we have not had one problem of any sort. It's been amazing. It's worked because I think it was supposed to work."

Diner numbers are up about 30% from what they were pre-pandemic, but those numbers have always fluctuated some, Howell says. There are more diners later in the month. Howell estimates that 0.5% use some sort of transportation to get to Stewpot. Nearly all of them walk. "We ... have maybe 40% that are street people, homeless people," along with veterans and those who suffer from mental illness, she says.

Some of the diners are regulars who have been coming to Stewpot for years, Howell adds. "They know that we care about them.

"Especially after this [pandemic] hit, people would stop us on the streets, and say, 'You didn't forget us," says Howell, her voice breaking with emotion. "And it just -- it's not that we hadn't done it forever. But Jesus, to think that right now people don't need to be forgotten."

Stewpot serves more than food. It added a clothing room; however, its operation "has kind of been problematic since covid-19," Howell says. "Although, we're going to make it work. It's just been a matter of thinking outside the box." Since the end of March, Stewpot volunteers have spent Thursdays, the normal clothing-room operation day, handing out personal hygiene items along with the sack lunches.

Stewpot diners have also been given washable masks. Large jugs of hand sanitizer are set up for use by the serving area. Howell is grateful to the groups that have contributed such items. "People that have never donated before have donated," she says. "I think they could just suddenly see that there was a real big need for this."

'COMPLIMENTS TO THE CHEF'

The lunch menus change, according to what is available.

"We are heavily dependent on the [Arkansas] Foodbank at this point in time because we're able to get more nutritious food for a reasonable cost," Howell says. At first, Stewpot distributed strictly cold sack lunches. "After about six weeks, we figured out that you could do a hot entree in a 12 ounce-cup with a lid down inside the sacks." So on "hot lunch Wednesdays," diners are served such entrees as red beans and rice, chili and spaghetti.

"And they'll go ... 'My compliments to the chef,'" Howell says with a chuckle.

Diners are also given fresh fruit, whenever it's available, and even homemade desserts from time to time.

"You can put a lot of stuff in a sack," Howell says. "And we've tried to make it so that there's food available for them to take with them -- prepackaged stuff. Right now, there's a granola bar in every sack, in addition to lunch, on Fridays and Mondays. We try to make it extra so it kind of bridges the weekend."

When volunteers come in for their shift, the first thing they do is look at the menu sheet -- Howell does these every week -- and it tells how many sacks will be made up. "Every day I talk to Ed [about] however many that we're doing. ... Then, because this is Thursday, we've got personal hygiene items today. And then, I just kind of list out exactly what we're going to do." Again, they're already set up for the next day.

"The team that comes in tomorrow will have to open 125 sacks" and add freshly made peanut butter sandwiches.

This day, diners will receive ham and cheese sandwiches. Another day, they may get turkey sandwiches. "On Fridays, we do some[thing] fun like barbecue pork, or we call it Nacho Friday" ... food trays with tortilla chips; topping in the lidded cups.

"Earlier this week we did homemade chicken salad for them. Just whatever we can come up with," Howell says. "We've tried to make it as normal as possible in really abnormal times." Same thing with the drinks, which also vary; water is available every day.

BORN WITH A GIVING HEART

Howell, who's also in a garden club and likes to sew, got her volunteer ethic from her parents. Also, "I had really strong female mentors and role models in my life. ... So I just thought that was what you were supposed to do." Her mother's family went to First Presbyterian; her parents were married here. "It's like the circle of life ... here I am back, years later."

She believes that Stewpot is just one of many such organizations forced by the pandemic to carry out their mission in whole new ways.

"We're going to make it happen. It just may not look the same, but it's going to be the same."

Stewpot is at 800 Scott St., Little Rock. More information is available at (501) 372-1804; stewpotlr@gmail.com or stewpot-littlerock.org. To donate online, visit: plumfund.com/charity-fundraising/LittleRockStewpot 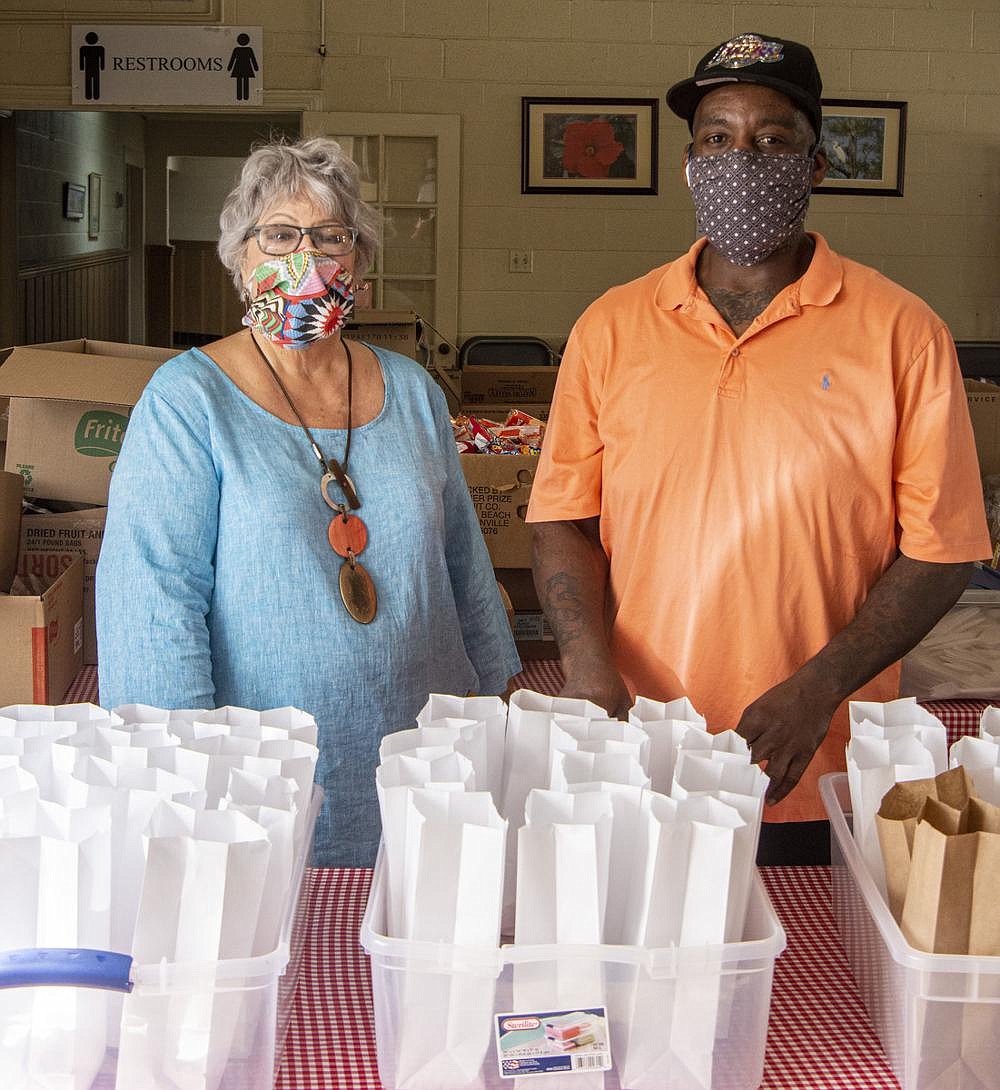 As board chairwoman for the Stewpot, Nancy Howell has steered the change — necessitated by the covid-19 pandemic — in getting midday meals to the hungry in downtown Little Rock. Instead of diners coming in to eat, they receive sack lunches distributed by employee Ed Brown (right). Howell says Stewpot ensures that meals are not just nutritious, but fun. “We’re not going to make them ‘eat their turnips,’” she says. (Arkansas Democrat-Gazette/Cary Jenkins)
ADVERTISEMENT