Stricklen's dream has moved on to Atlanta 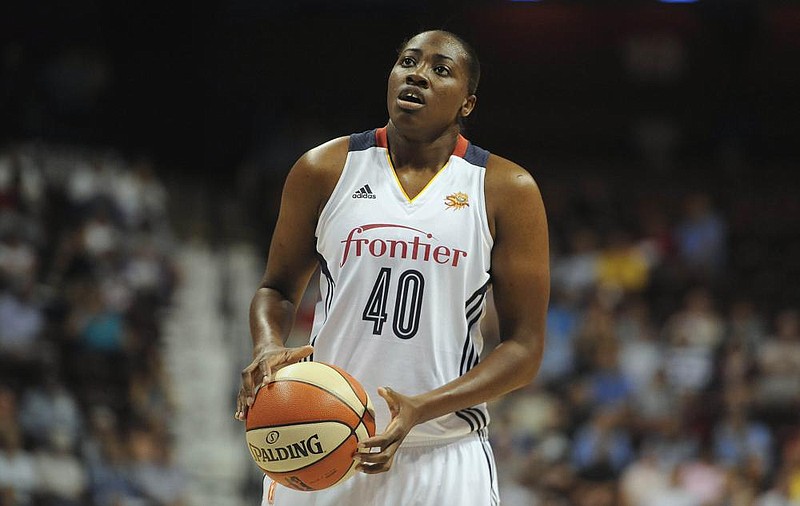 For many in the WNBA, there's really no such thing as an offseason.

When regular seasons and postseasons end for the league's 12 teams, a large portion of the players pack their bags and passports for a stint to play overseas, a regimen that's almost become a way of life for standouts like Shekinna Stricklen.

But when the Arkansas native decided to skip her annual trek across the Atlantic Ocean in 2019, it gave her an opportunity to do something that she hadn't done as often as she'd like since becoming a professional athlete.

"I got a chance to do more fishing," she said. "That's something I like to do, but when you pretty much play basketball all-year round, you don't get a chance to do a lot of things. I'd usually get about 10 days after the season before I'd go overseas for like six or seven months. After that, I'd come back and get ready for training camp.

"I did that for a good seven years straight. So when I decided not to go overseas, that gave me a chance to come back home to Arkansas and spend time with my family. I kind of got a real vacation for the first time in a long time."

Stricklen's extended break, which ended up being drawn out even further because of the coronavirus pandemic, ended earlier this month when she and other WNBA players reported to IMG Academy in Bradenton, Fla., where each team will play a shortened 22-game schedule under a bubble format.

The WNBA kicked off its 24th year Saturday with three games, but for Stricklen, her season begins today when her new team, the Atlanta Dream, takes on the Dallas Wings at 4 p.m. According to the former collegiate All-American, her excitement level is high, but it's different than it's been in previous seasons.

"The thing with me now is that I feel like a real veteran now," said the 29-year-old, who is in her ninth season after being selected No. 2 overall by Seattle in the 2012 WNBA Draft. "Being the oldest player on a young team, it's a different feeling. But I'm excited about it just the same, especially with what's been going on in the world."

There's a lot that's happened since Stricklen signed a two-year deal with Atlanta in February. Political sparring and racial tensions have been heightened in recent months, not to mention the damage covid-19 has caused globally.

But the 6-2 forward has found a way to navigate through it all in order to get herself ready for a season that she wasn't sure would happen.

The WNBA wasn't immune to the devastation caused by the coronavirus. The league was forced to hold a virtual draft and postpone the start of training camps in April. The season, which was slated to begin on May 15, was also suspended until yesterday.

Stricklen, who'd spent the previous five years in Connecticut before inking with the Dream as an unrestricted free agent, was left wondering what the next steps would be.

"When [coronavirus] really started picking up, I was like 'man, this is crazy'," she explained. "It got me scared for a while because it kind of put all of us on notice worldwide. I really didn't think we were going to play a season this year to be honest.

"I'd just signed my contract, and it kind of threw things off. I was looking forward to actually being in Atlanta and getting use to the city. I was there for like seven days, but now, I'm in Florida in this bubble where it's still kind of scary. You can't really run from the virus, you've just got to do the things you can and try to stay safe."

Safety precautions were usually recommended for Stricklen's opponents during her days as an amateur. She was a two-time Gatorade Player of the Year and a McDonald's and Parade All-American at Morrilton High School before transitioning into one of the nation's best at the University of Tennessee under the tutelage of the late Pat Summitt.

Stricklen scored nearly 1,900 points in her four-year career at Tennessee and was named the SEC Player of the Year in 2011. The Lady Vols fell short of winning a national title during her tenure, but she revealed that the wealth of knowledge she obtained from the hall of fame coach was immeasurable.

"Playing for Coach Summitt was amazing," said Stricklen, who helped the Lady Vols win three SEC tournament titles. "It wasn't easy, but she was the best, and I learned so much from her. When I came in, we were a very young team.

"There were six or seven freshmen coming in, and there were already four sophomores. But we had no juniors or seniors. So it was tough at first, but we grew and got better quick because of her."

Her three years in Seattle, where she was drafted, also afforded growth, particularly as a rookie, Stricklen said.

"When I got there, I was on a team with legends," she noted. "Tina Thompson, Sue Bird, Lauren Jackson, Katie Smith, Temeka Johnson. ... multi-legendary players. I got a chance to learn from them all, which only helped my game."

The roles switched when she was traded to Connecticut in 2015. Stricklen was more established and became a mentor-like figure to younger players on a team that made the playoffs in each of her final three years there. In her eyes, Connecticut was also the place that enabled her game to ascend.

She shot at least 35 percent from beyond the three-point line in all five seasons with the Sun. In 2018, she ranked fifth in the league in three-point shooting percentage (43 percent) and the following year, won the 2019 All-Star three-point contest.

"That's where everything took off for me," she said of her time in Connecticut. "I grew there a lot, too, because I really learned what it meant to be a veteran. I just so happened to become one of the best shooters in the league, too. I definitely enjoyed my time with the team."

Now, Stricklen is set to embark on a new journey with the Dream, who have missed the postseason in three of the past five seasons. There has been a bit of turmoil associated with the team in recent weeks, as well, concerning statements made by team co-owner and U.S. Senator Kelly Loeffler.

Loeffler, who faced scrutiny earlier in the year when she and her husband were investigated for selling millions of dollars worth of stock just prior to a stock-market crisis caused by the coronavirus, is receiving backlash over her comments against the league's decision to use 'Black Lives Matter' this season as a way to education others about social injustice. She also referred to the movement as a "radical Marxist group that actively promotes violence and destruction across the county" in a letter she sent to WNBA Commissioner Cathy Engelbert.

The Dream issued a collective statement in support of the movement and mentioned that they're response was one of humanity and not politically motivated.

Stricklen acknowledged that Loeffler's remarks were a big distraction to the team.

"It really was for a while," she said. "In fact, I think we all were a little frustrated about it. We had a lot of conversations together as a team because we're the ones really dealing with it.

"But we stick together no matter what, and we're just trying to deal with it now."

The best way for Atlanta to block out that noise, Stricken said, is to get back on the floor and compete. The Dream will be without two of its top players this season in Renee Montgomery and Tiffany Hayes, both of whom decided to sit out for the year. Stricklen still feels her team has enough on its current roster to turn heads.

"We're basically the underdogs, but we're going to be good," she said. "We've got a quick team, got a good rookie [Chennady Carter] coming in. I know a lot of people will try to run me off the three-point line a lot so that's why I've been working on my pull-up game and things like that.

"I've just got to keep doing what I've been doing, and that's space the floor and knock down shots. I think we'll be a fun team, though. I really expect us to surprise some people."

Stricklen at a glance

NOTEWORTHY Named MVP in helping Morrilton win a state championship in 2006. … Played on two gold-medal winning teams during international play. … Selected as USBWA Freshman of the Year in her first season at Tennesse in 2008. … Was drafted No. 2 by Seattle in the 2012 WNBA Draft. … Averaged a career-high 10 points per game during the 2013 season. … Played for Seattle (2012-14) and Connecticut (2015-19) prior to signing a deal with Atlanta in February.