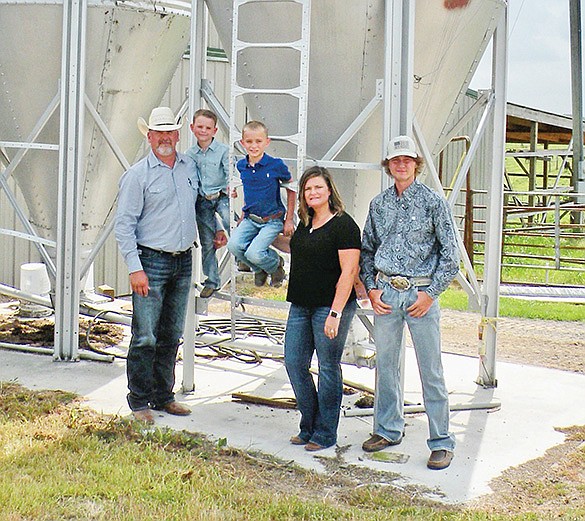 The James Reed family is the 2020 Van Buren County Farm Family of the Year. The Reeds raise hay, timber and cattle on 959 acres.

The farm was passed down to James’ grandfather, the late Richard Thomas Reed, then to James’ father and mother, Richard and Dee Reed, who still live on the land where James raises his cattle.

“Our family is honored to be recognized as the Van Buren County Farm Family of the Year,” James said. “We have been truly blessed to get to live a life of the values this country was founded upon and to instill those values into our boys.

“Ranching/farming is hard work, as the days off are few, and weather cannot ever be a factor in the chores getting done,” he said. “However, it is rewarding to see gain from the work put in. We could not be as successful as we have been without the help of our family and our friends, who are like family. It truly takes a village at times, but again, that’s how our ancestors ranched/farmed, too.”

The Reeds background approximately 400 to 500 head of stocker cattle each year. The cattle are then sent to Hitch Enterprises Inc. in Guymon, Oklahoma, to finish out.

“When they are ready to go to slaughter, Hitch markets the product to Tyson or Cargill,” James said. He said the family also raises 160 head of cow-calf pairs, which are sold at local sale barns or through social media or word of mouth. They have three bulls on the farm as well.

The Reeds market their hay, which is grown on 205 acres, through social media or word of mouth.

The remaining acreage includes 435 acres of permanent pasture and 319 acres of timber, some of which is set aside for hunting.

“At times we background cattle for other ranchers, businessmen and/or colleagues by contract,” James said. “By backgrounding, we are taking them from the sale barn or pasture to our working facility. We then work the cattle by giving them the proper vaccinations, essential wormer and necessary vitamins for maximum growth and health advantage.

“We feed them twice daily and continuously care for the cattle,” he said. “We walk through the cattle daily, looking for any signs of sickness or need for medication. We keep the cattle anywhere from 60 to 90 days.”

In addition to raising cattle and hay, the family also contracts custom hay-baling, bush-hogging and land-reclaiming services, using their equipment. They also provide custom-fed beef, sold by the pound, on the hoof (the weight of the animal before processing).

“I just decided I wanted to go to work instead of school,” James said, “so I came home to the farm and built a house.”

James said he and Crystal first began dating when he was 16 and she was 14.

“Then she went off to college, and we grew apart,” he said. “We both had gotten married and gone on with our lives. Things happened, and we reconnected and were married in 2009.”

Crystal is a daughter of Pam Clay of Rose Bud and J.W. May of Gravesville. She graduated from Quitman High School in 1994 and from Arkansas Tech University in Russellville in 1999 with a degree in agriculture business. She worked at Acxiom Inc. in Conway for 16 years.

“For both of us, the love of agriculture started in FFA,” James said. “Both of our families had always had hobby farms, and at one point, Crystal’s family owned a small dairy herd.”

In high school, James was on the land-judging team and said he always wanted to educate himself on how to improve and bring value to the land his family owned.

Crystal was on the dairy-judging team in high school and kept four to five dairy bottle calves to sell when weaned.

“For years, we did the hobby longhorn cattle operation or a few beef cows/calve pairs,” James said. “But when we owned the local feed store in Clinton, I started talking to others who backgrounded cattle and was intrigued by the challenge of feed efficiency and death-loss management, while still turning a profit.

“We are still intrigued with this challenge today,” he said. “We are constantly researching, visiting other facilities and talking with colleagues on what’s working and not working.

“We also love the fact that we can involve our children in our operation,” James said. “We are able to teach them the value of agriculture, how it is truly what sustains life, and the value of responsibility and a hard-work ethic.”

Both James and Crystal work off the farm as well. James has his own construction company, and Crystal is an insurance agent at River Company of Central Arkansas.

The entire family works on the farm.

“Everyone is involved in the day-to-day work of running our cattle operation, starting from gate openers, working cattle, fetching supplies and building fences,” James said. “There’s always plenty to do.”

Their oldest son, Tanner, is a recent graduate of Mount Vernon-Enola High School, where he was a member of FFA and showed steers at the local, district and state level. He won Reserve Grand Champion at the Faulkner County Fair in 2017.

Tanner also works for James in his construction company.

The Reeds’ youngest sons, Cawl and Riggin, have signed up to be members of the Van Buren County 4-H club and hope to show animals this year at the county and district levels. The boys raise chickens as part of the 4-H program. They both play baseball and participate in the Awana program at Clinton First Baptist Church, where both attend school at the church’s Christian Training Center.