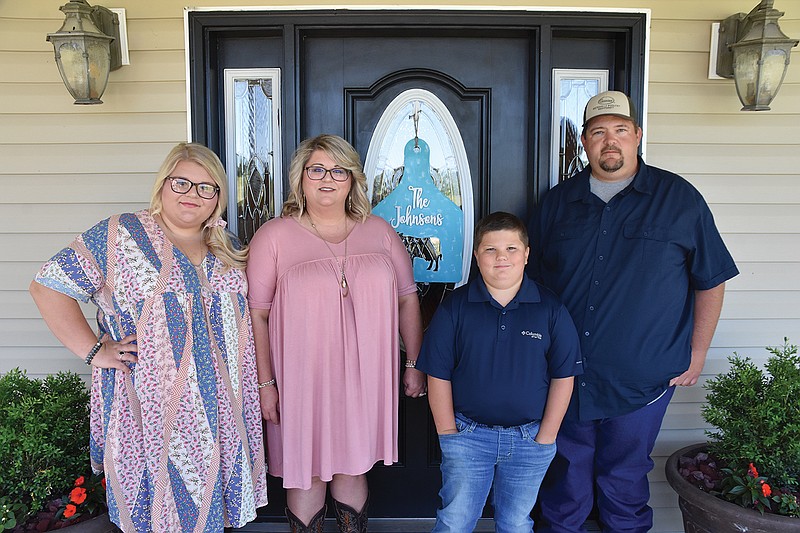 The Brandon Johnson family of Zion is the 2020 Izard County Farm Family of the Year. Family members include, from left, Katelynn, Crystal, Kayden and Brandon Johnson. They raise cattle, poultry and hay.

Brandon and Crystal Johnson raise poultry, cattle and hay on 335 acres they own and/or lease in Izard County. They are the 2020 Izard County Farm Family of the Year, along with their daughter, Katelynn, 16, and son, Kayden, 8.

“This has been a very nice honor,” Brandon said of the recognition. “We are very well blessed.”

“We got married in 2001 and shortly after [that] got a bank loan and purchased 10 cow/calf pairs that we ran on rented pasture,” Crystal said. “A few years later, we purchased our original 35 acres. Then in 2016, we purchased 98 acres to build four poultry houses.

“This year, we purchased 22 more acres and another home from a beloved friend’s estate,” Crystal said. “We are currently renovating that home so we can utilize it as a rental home.”

Brandon said the couple would like to “purchase more farmland so we could increase our herd size to 150 brood cows and be able to produce enough hay to feed our own herd, plus be able to sell 200 to 300 bales per year.”

The Johnsons currently have 60 cows/heifers and three bulls. They raise approximately 574,000 head of broilers per year for Ozark Mountain Poultry in Batesville. They also raise 85 acres of hay.

“Each year, we sell an average of 400 tons of chicken litter, which offsets the cost of clean-out [of the broiler houses] and the purchase of new rice hulls,” Brandon said. “We recently were fortunate enough to be able to purchase a spreader truck. We use that to spread litter on our pastures and hay grounds.

Brandon, 37, and Crystal, 39, are both employed at the Easy K Ranch in Sage, which is a home for people with special needs, ages 18 and older. The facility is licensed for 19 residents. Brandon is the maintenance director, and Crystal, who has a nursing-home-administrator’s license, is the director.

Crystal, 39, is a daughter of Jimmy and Shawna Branscum of Cushman. Crystal graduated from Cushman High School in 1999 and has been the director at Easy K Ranch since 2010.

“I did not grow up on a farm,” Crystal said, laughing. “I have learned a lot.”

Katelynn attends ICC High School and takes concurrent college classes through Ozarka College in Melbourne. She is a member of the Student Council, FFA and the Fellowship of Christian Athletes and takes gifted-and-talented classes. She is also treasurer for the CHASE Club, which promotes a healthy lifestyle for all ICC students. She is a member of the softball team, the Quiz Bowl, and the track and shooting-sports teams and recently joined the Melbourne 4-H Club and the ICC livestock show team.

Katelynn was elected 10th-grade homecoming maid by her class and was later elected the 2019/2020 senior high homecoming queen by the student body. She has regularly attended the Brockwell Gospel Music School and is now a published songwriter. She attended the state FFA convention in Hot Springs and received recognition for the talent category.

Kayden will be in fourth grade at ICC in the fall. He hopes to play Mighty Mites football in the fall and to show a cow for the first time with the 4-H club.

Kayden helps with the cows and the chicken farm.

“He is the No. 1 gate-getter in our family,” Crystal said, laughing. “He has recently learned to drive the Kawasaki Mule and loves to help his dad any way he can.”

Brandon is an active member of the Izard County Farm Bureau, a member of the security team at Fairview Baptist Church in Violet Hill, a volunteer for the Zion Volunteer Fire Department and secretary for the Zion Cemetery Association.