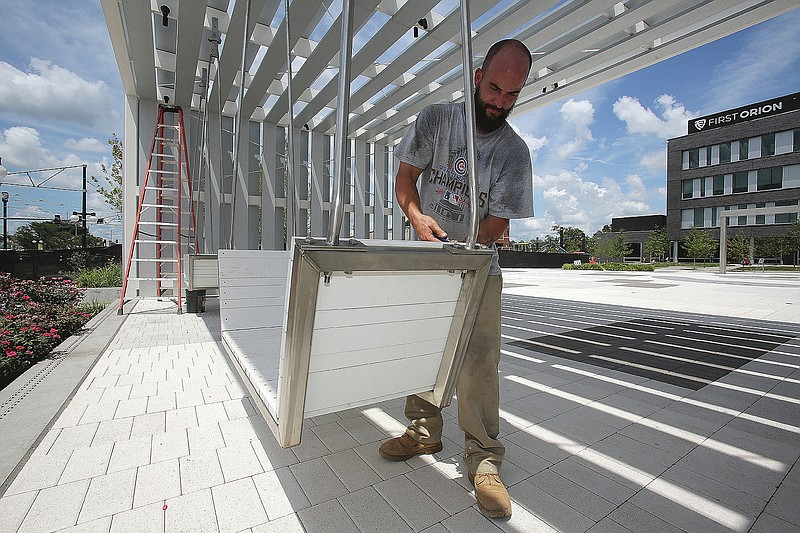 NORTH LITTLE ROCK -- The lights are on, the water is ready and the swings have been repaired, which means the much anticipated Argenta Plaza is officially ready for business despite some hiccups along the way.

Erica Warden, director of sales and events at the North Little Rock Convention and Visitors Bureau, said the $5.36 million city-owned plaza at 510 Main St. in the Argenta Arts District is completely open, but the covid-19 pandemic has put a damper on the grand opening festivities.

A second grand opening of the plaza was scheduled for May, when the plaza was to unveil its fountains and water wall, but Warden said covid-19 derailed those plans.

Bob Major, president and chief executive officer of the North Little Rock Convention and Visitors Bureau, said the Argenta Plaza has not been formerly turned over to the city of North Little Rock by Alessi-Keys Construction Co., but Warden has been working with the construction company on various matters and planning future events.

Warden said events at the plaza mostly have been put on hold or canceled because of covid-19.

"We haven't been able to have a grand opening, and events in September and October have been canceled or postponed," she said. "Covid has especially affected the events aspect."

Officials have said they anticipate the plaza becoming the centerpiece for an area that eventually will include the First Orion office building on the back side of the plaza, and a Power & Ice indoor food court on the north side.

Warden said she is hopeful the Argenta outdoor dining district will help people gravitate to the plaza and rekindle the excitement from last year.

"We have had a few groups of people stop by here with their coffee or something, but I think once people know this is open then we will see a lot more traffic," Warden said. "The entertainment district should really help us because people can go eat and then grab a to-go drink and come here and sit on the swings and enjoy themselves."

The City Council in June unanimously established a downtown entertainment district as quickly as possible to boost the city's economy during the covid-19 pandemic.

The North Little Rock Convention and Visitors Bureau has the authority to exclude Argenta Plaza from the entertainment district during specific times, the ordinance states.

"There are a lot of entertainment districts, but an outdoor dining district makes our area in Argenta unique," Major said previously. "People can enjoy a meal, take a stroll during Art Walk, and soon listen to music and relax in Argenta Plaza with a cup of whatever they choose."

The plaza includes a "front porch" area with modern swings, a stage with a 40-foot video projection wall, LED lights, a water wall and fountains, and a "backyard" area with trees.

The swings debuted last year during the Northern Lights Festival but were put away soon after because of damage done to them by visitors.

Warden said the swings will be available again by the end of the week after being reinforced.

Cameras also have been installed around the plaza, which allows officials to monitor the area and keep an eye on the swings.

There is also talk of expanding the Argenta Plaza over into Sixth Street, but Warden said she isn't sure when that might happen.

From touch-screen controls to digital boards and artistic lights, the plaza is cutting-edge, but the electronics' use has been pretty basic so far.

Warden said the plaza was intended to be able to be controlled remotely from the welcome center, but subcontractors, who are in Florida, haven't been able to train the bureau staff. That means everything must be done manually at the plaza.

"I essentially taught myself," Warden said with a laugh. "The manual on how to turn on the water is over 1,000 pages alone. I have learned so much that I thought I would never learn as a sales and events director."