How pediatricians are talking to their kids about covid-19 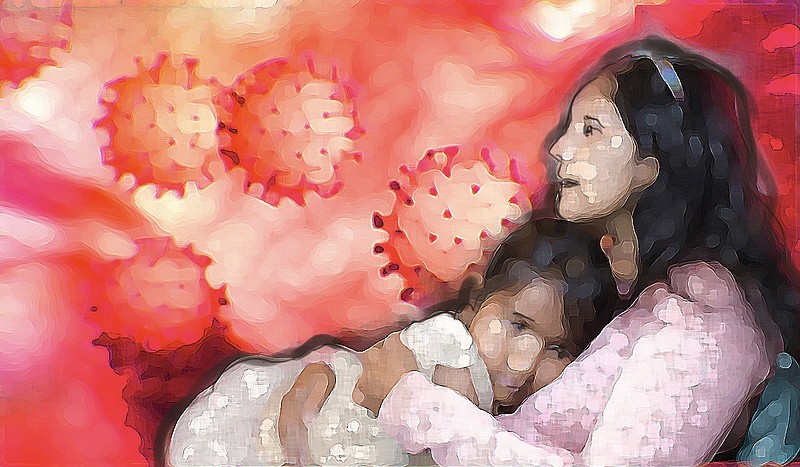 How will children make sense of the times we are living through? How can parents help them form — and understand — the narrative, even when they themselves feel worried, overwhelmed and unsure?

I asked several pediatricians how they are telling their children the story of the pandemic.

Dr. Gail F. Shust, an associate professor in the division of pediatric infectious diseases at New York University School of Medicine, has said to her children, ages 13 and 15, "If you ever have kids, someday you're going to tell them about this time when we all stayed inside for months, and everybody wore masks."

Dr. Adam Ratner, the director of pediatric infectious diseases at New York University Grossman School of Medicine and Hassenfeld Children's Hospital at NYU Langone Health, said, "I don't even know how to tell myself the story about what's going on right now." He wrote in an email, "For me, some days feel like a great story of grit and hope, and some feel like we're just standing on (or stepping off) a precipice."

His daughter is in college, he said, "and I can talk to her like I can talk to a grown-up, she loves public health stuff." Because she is interested in medicine, he said, "I wanted to model that good doctor behavior where you sometimes have to do things that are frightening or where you don't have 100% of the information."

The narratives vary depending on children's ages, but all children need narratives. Dr. Grace Black, a pediatrician on the faculty of the University of Rochester, has three young children, the oldest of whom was in kindergarten when the lockdown interrupted their lives. For her 3½-year-old, who wanted to go out and go places, she said, "We can't go because there's a virus that's making people sick, so we can't go, we don't want to get sick."

Her son said OK, she said, and three days later, he said, "We didn't get sick, so can we go now?"

Dr. Jenny Radesky, an assistant professor of pediatrics at C.S. Mott Children's Hospital in Michigan, said: "We want to tell a story to our kids about what this time is going to mean, but are we going to be able to? Sometimes when you're in a state of high stress, it's hard to take a step back and do that bigger-picture reflection."

In an email, she wrote, "I think meaning-making usually involves achieving a sense of central coherence that a lot of U.S. parents don't have right now." An expert on children and digital media, Radesky said one reason it could be hard to tell that larger story might be because parents were "dealing with little bits of information coming at us, tailored feeds on the internet, doom scrolling, trying to make sense of it."

And it's harder, she wrote, "when your brain is feeling scattered, traumatized and isolated: We usually need other people and our collective cultures to help make meaning out of experiences."

Reading other narratives can help children think about their stories, and writing things down is powerful. Dr. Amy Shriver, a general pediatrician in Des Moines, Iowa, has daughters who are 9 and 12. Her older daughter is reading Anne Frank's "The Diary of a Young Girl," she said, and talked about feeling trapped.

"Hamilton," which premiered in film form over the Fourth of July weekend, was a reference point for a number of children. Radesky said it had helped her family through what would otherwise have been a difficult holiday, and Shriver's 12-year-old, a fan, said to her, "Mom, this is what it's like when the world turns upside down."

Shriver wrote: "I'm encouraging my kids to journal every night about life during the pandemic. I'm telling them how incredible it is that everyone in the world is experiencing the same stress and worries at the same time. Even though we are physically distanced, we all feel closer to one another due to this shared experience."

Dr. Ken Haller, a professor of pediatrics at St. Louis University, wrote that he had been asking parents versions of this question since 2014, when many of his patients were affected by the uprising in Ferguson, Mo., after Michael Brown was killed. "I was especially asking parents of babies and very young children what they would tell their children in 10 or 15 years about what life was like during the protests," he said.

At that time, he said, most parents would say they hadn't had time to think about it, but when he asks the question now, parents are interested in keeping track -- writing in a diary, saving social media posts, maybe even making videos of them talking to their children when they're older.

"As pediatricians and people who care for children, it's been a fascinating time in our history," said Dr. Ruchi Gupta, a professor of pediatrics and the director of the Center for Food Allergy and Asthma Research at Northwestern and Lurie Children's Hospital. "How can one virus stop the world?"

She wanted her children to tell me their own stories of this time. There were disappointments: Her 18-year-old son missed out on his senior year festivities and his in-person graduation, and her 14-year-old daughter missed her eighth-grade graduation after spending 11 years in the same school.

Her son, Rohan Jain, talked about how important it had been "to write every day about what's going on in the world and what my thoughts are." It was important to him to march for racial justice, he said.

His sister, Riya Jain, wrote a book explaining covid-19 to kids. "I had so many questions, so kids younger than I would have the same questions if not more," she said. And she has been making a video journal. "I hope in 20 years I can show that to my kids to help them understand what the year 2020 was like," she said. Citing the protests and the chance to make changes in the world, she added, "It's not all sitting at home sad."

Haller has been asking children what it's like not to be in school, and one 6-year-old answered, "I hate it."

His mother responded, "He used to always say he hated school."

Haller wrote: "He looked at her and said, 'No, I didn't.' She returned his look, with a raised eyebrow. He sighed and looked at the floor again. 'I miss my friends. I want to go back.'"

So the doctor asked the child: "Twenty years from now, you may have a kid of your own. What are you going to tell him about what it was like to be around in 2020?"

The boy answered, "I'll tell him it was real bad." He thought briefly and then added, "And I'll tell him that I really liked school."

Haller wrote: "His mom smiled. I looked at her and nodded. 'I'll tell him we were just tired all the time,' she said, looking at her son, 'but somehow we all got through it.'"