WATCH YOUR LANGUAGE! Irrespective of its respectability, ‘irregardless’ now a word 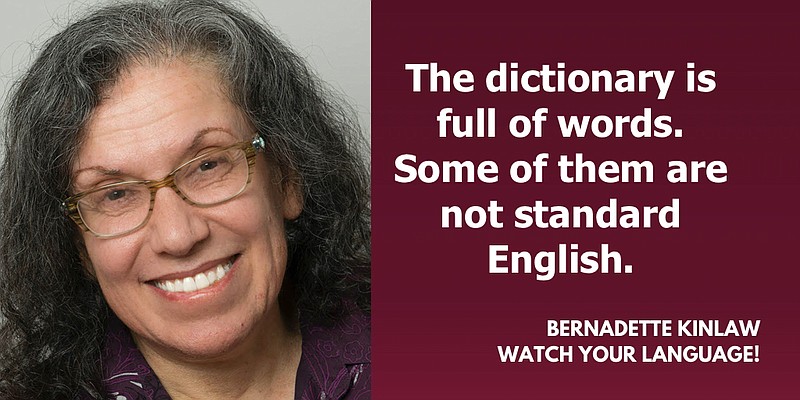 Is "irregardless" a word?

For some reason, people have been posting on social media recently that Merriam-Webster has decided to accept irregardless as a synonym for regardless. Many people would say that irregardless is a double negative and, so, renders itself useless.

I haven't been shy about complaining about words added to the dictionary in recent years. I still think it's weird that in 2018 we needed entries for "marg," which is short for "margarita," or "rando" for "random." And it's rando that in 2019 we needed "buzzy" to describe something causing a buzz and "unplug" to describe the act of taking time off from electronic devices. OK, this shows how unhip I am.

Merriam-Webster lexicographer Kory Stamper says "irregardless" is a word and belongs in the dictionary, despite how many people hate it. The word might come from confusion over the words "irrespective" and "regardless."

Stamper offers a definition I hadn't heard before. Suppose a son asks to borrow his dad's car. The dad says no. The son pleads, the dad still says no. After one more plea from the son about all the things he would promise to do if he can borrow the car, the dad says a final word: "irregardless." Stamper says that its use here means that the conversation is now over.

This was a big shock to me. And I'm still cynical.

The entry in Merriam-Webster doesn't mention this Stamper philosophy. It labels the word "nonstandard" and adds this: "Irregardless is a long way from winning general acceptance as a standard English word. For that reason, it is best to use regardless instead."

I was surprised to see the irregardless issue on social media lately because the change happened back in 2017.

Remember, as a kid, you'd hear some young pedant say in singsong, "Ain't ain't in the dictionary!"

I don't think I've ever used "ain't," except maybe in a song lyric. I think I would feel an electric shock or something, no doubt sent from my mother in her heavenly perch.

But it is in the dictionary. Merriam-Webster calls "ain't" nonstandard, too. At least "ain't" is acknowledged as an attention-getter: "It is used in both speech and writing to catch attention and to gain emphasis."

To infer means to guess at someone's meaning. It's often paired with "imply." The speaker implies a specific thing, and the listener infers the meaning. The AP Stylebook is clear on the matter. The meanings of the two words are different.

But Merriam-Webster adds a meaning for "infer": to suggest or hint. So to infer is also to imply.

The dictionary says social philosopher Sir Thomas More used "infer" to mean imply way back in 1533. I always find it a bit funny when defenses of words include proof from the 16th century. I found a glossary that defines words from around that period:

creeper. A device with pointed parts that provides stability on slippery or sloped surfaces, usually worn on the feet.

traces. Straps (leather, chain) connecting the breast collar on a horse and the whiffletree of a cart.

Admittedly, I will use language scholars from the past as sources for this column, but I try not to go back too much farther than the 20th century.

And lots of people will say that the language changes and so we have to adjust. My theory depends on what kind of mood I'm in, sometimes.

Anyway, the dictionary's usage guide does mention that the suggested meaning of infer "is found in print chiefly in letters to the editor and other informal prose, not in serious intellectual writing." Wow, a weird dose of shade toward people who write letters to the editor.

In another nod to the changing language, Merriam-Webster added a definition of "literally" that means figuratively.

The AP Stylebook makes a distinction between the two words. You might say, "I could eat a horse," and though you wouldn't truly eat a horse, you're letting people know that your hunger is vast.

You shouldn't say, "I could literally eat a horse." Because you truly won't.

But the dictionary nowadays says "literally" means figuratively, too. The editors explain, "It has been in regular use since the 18th century and may be found in the writings of Mark Twain, Charlotte Bronte, James Joyce, and many others."

One reader commented, "I literally can't even."

A reader sent me a verbing pet peeve that fits in well with a recent column on business jargon. He says "partner" is a noun and need not be used as a verb. Do we partner with people or do we become partners? I continue to say that verbing is bad.