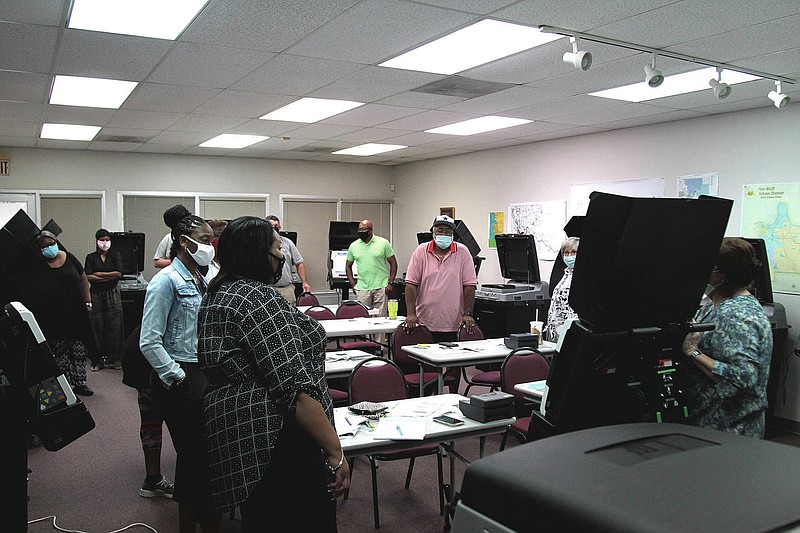 Jefferson County election officials listen as a training from Election Systems and Software explains how to operate the new ES&S ExpressVote voting system. The county recently received nearly $1 million in new voting equipment to replace the old ES&S iVotronics voting system that had been in use since 2006. (Arkansas Democrat-Gazette/Dale Ellis)

PINE BLUFF -- The Jefferson County Election Commission engaged in an extended and contentious debate last week when two commissioners clashed with George Stepps, the county's new election coordinator, who was hired earlier this year by County Judge Gerald Robinson to assist the commission.

About 240 poll workers, including poll judges, sheriffs and intake clerks, each with different sets of duties, must be trained on the county's new voting system, the ExpressVote voting system, manufactured by Election Systems & Software of Omaha, Neb.

The election will likely be conducted during what some health officials are predicting to be a fall resurgence of the novel coronavirus pandemic that, in midsummer, has infected more than 4 million people around the U.S., including more than 35,000 in Arkansas.

To ensure the safety of poll workers and voters, the commission is trying to work out the details of conducting a no-contact election, notifying poll workers of those details, and obtaining signage for polling places to provide directions to voters.

Stepps drew fire from commissioners Stuart "Stu" Soffer and Michael Adam, chairman of the Election Commission, over a plan he presented for training poll workers that included securing such sites as the Reynolds Center, the White Hall Community Center, and the Pine Bluff Convention Center to conduct up to 10 training sessions for poll workers.

Stepps said he planned to conduct the training sessions on dates ranging from mid- to late August in order to have the poll workers trained on the new equipment in time for the election, but not so early that it might create a need for additional refresher training as the election draws nearer.

Soffer criticized Stepp's plan as being insufficient, incomplete and lacking in detail and asked Stepps how the venues for training would be paid for.

"I'll go through the proper channels over there to get it done," Stepps said.

"How do you go through the proper channels?" Soffer asked. "This has nothing to do with our appropriation or our budget."

"The first thing we need to do, if we're going to do this, is go to these places and see what it will cost to use them," said Adam. "We can't decide anything until we have a cost factor."

"I have no problem with that," Stepps replied, "but two days prior to now, it was almost like a demand that I come up with a plan of action," Stepps said.

"I have a problem with this," Soffer said. "I gave specific instructions to not worry about dates at this point, and I dislike it when my instructions are not followed. The plan itself is worthless and if you're offended, I apologize."

"There is no, repeat, no election coordinator training available from the State Board of Election Commissioners," Soffer said. "The county judge has been told this. Chairman Adam has been told this, but yet they persist with the myth that they'll go get trained. The only training is on equipment."

Davis countered that all three of the election commissioners had received training from the State Board, as had other commissioners from around the state, and, he said, election coordinators.

"Since he is new, I'm suggesting that we try to get that training for him," Davis said.

"What I'm suggesting is that he's over his head and he's overwhelmed," Soffer said. "He couldn't even get this meeting right and you want to throw more at him? I'm not going to go along with much more of this."

"Everybody has to be trained," Davis said. "We've had a number of people who have worked for us and they were all trained."

Davis named off several people who were working, or had worked for, the commission, including the current election administrator, Sven Hipp, and Julie Kendricks, Hipp's predecessor.

"Every one of those people was first a poll worker," Adam said. "Then they were a poll judge. Then they worked in the office, not as a coordinator or an admin, but they were an assistant to somebody who was already trained. That person trained them."

Adam pointed out that the commissioners hired election administrators but had never hired an electon coordinator. Those hirings, he said, had always been done by the county judge.

Daniel Shults, director of the state Board of Election Commissioners, told the Arkansas Democrat-Gazette last year that the role of election coordinator is not defined in state law and is not a required position. County election commissions that utilize an election coordinator define those duties according to the individual needs of the county.

Davis said that for the past three years, Soffer had performed the duties of preparing for elections by notifying and training poll workers, programming the ballots, and myriad other tasks associated with the election process.

"We cannot expect anyone to just walk in here and know what to do without training," Davis said.

Soffer said that he had provided detailed written instructions to Stepps regarding what documents were needed for the meeting, how many copies of each were needed, and who copies were to be distributed to.

"It said you make this many copies and each commissioner gets this, the media gets this, and he couldn't even get it right," Soffer said. "I am no longer willing to do the administration that somebody is getting paid good money to do."

"You've been doing all of this for three years and now you're walking away," Davis said. "We are just setting people up for failure."

During the debate, Stepps sat quietly and listened, but then addressed the commission to defend himself.

"What ya'll want is an employee, not a coordinator," Stepps said to Adam. "Ya'll don't know how to talk to nobody. I'm 73 years old and I'm not going to let you talk to me like that."

The commission reviewed a two-page list of steps to provide for a no-contact election. Some of the details included providing masks and gloves for poll workers and possibly providing face shields and gowns upon request, securing enough pencil erasers for each voter to activate the touch screen voting machines without physical contact, placing barriers in front of poll worker stations to keep voters at a 6-foot distance, and providing trays for voters to pass their identification upon check-in and for ballot materials to be passed back to the voters.

The commission unanimouly approved the concept of a no-contact election and agreed that further details would be added as commissioners received feedback regarding additional measures.

Commissioners reviewed two letters drafted by Stepps, one to the county polling sites on record and one to poll judges who worked the March Primary Election, explaining the ease of use of the new voting system and providing a brief overview of the precautions that will be taken at each polling site to ensure the safety of poll workers and voters and requesting feedback on what additional measures may be needed at individual polling sites.

After the meeting, Davis said he was appalled by the treatment Stepps received during the meeting and the overall conduct of the meeting.

"These are grown men and they've trained everyone they've hired but they have refused to train anyone hired by the county judge," Davis told the Democrat-Gazette. "Mr. Soffer has performed the duties of an election coordinator in past elections, but when we get a coordinator, we don't train them? That doesn't make sense. That's just setting them up for failure and there's no excuse for it."