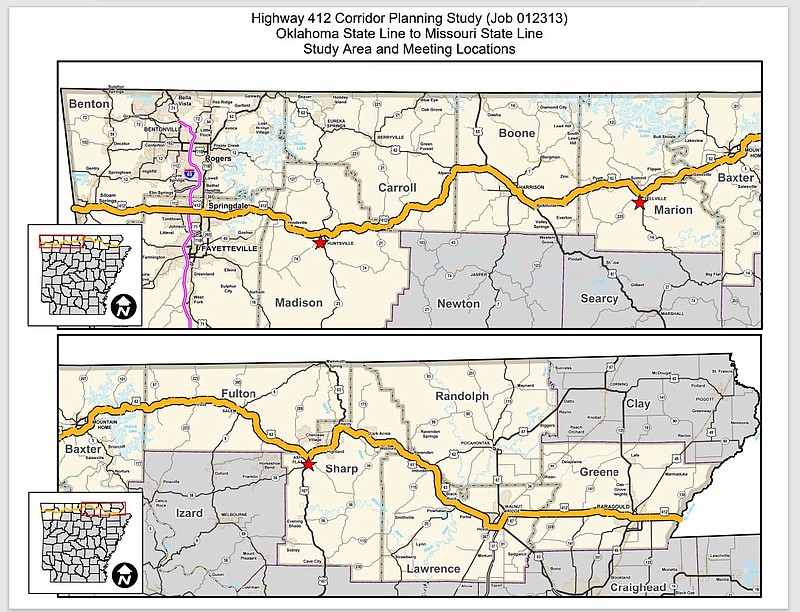 The estimated price tag to complete a four-lane build-out of U.S. 412 from Oklahoma to the Missouri Bootheel, "which is seen as a critical path toward economic prosperity for north Arkansas," is $2.3 billion.

That is according to a new Arkansas Department of Transportation study of the 285-mile route that snakes through seven counties in north Arkansas. The study represents an update to one conducted 22 years ago and came after prodding from the Arkansas Legislature and Gov. Asa Hutchinson in 2017.

The total cost includes $1.2 billion in identified preservation, safety and mobility needs and another $1.1 billion to build out the entire route to four lanes.

Given the huge cost, improving safety and preserving the existing system should be top priorities, the study concluded. To accelerate expensive widening on new locations, partnerships with local authorities to help shoulder the costs should be explored, the study added.

"It's a very important corridor," said Randy Ort, deputy director and chief operating officer for the department. "It has been my whole career. It's an expensive upgrade. If we could commit the dollars, we could have a vastly improved 412."

Alec Farmer, a member of the Arkansas Highway Commission from Jonesboro, agreed on its importance. He notes that it is one of the state's congressionally designated high-priority corridors and remains a pillar of the four-lane grid system that the department uses as a planning guide.

But the other parts of the state's highway system also are congressionally designated corridors and also compete for the state's road construction priorities.

"A lot of it depends on the resources we have to fund the projects," Farmer said.

Perhaps nothing illustrates the challenges of the route more than traveling between Farmer's hometown and Fayetteville, cities that anchor their respective corners of north Arkansas.

Via mainly U.S. 412, Jonesboro, which is in the northeast part of the state, lies 249 miles from Fayetteville in Northwest Arkansas.

Currently, only about 125 miles of U.S. 412 are four lanes. Another 42 miles are three lanes, mainly for passing; and the balance, or 118 miles, of the highway's entire 285 miles in Arkansas, are two lanes. Traffic volume ranges from as much as 34,000 vehicles daily in Springdale to as little as 3,300 vehicles daily in Fulton County.

A trip from Fayetteville to Jonesboro by way of U.S. 412, as a result, takes almost five hours. The trip takes less than 4½ hours if it is taken using U.S. 67 south to U.S. 64 in Central Arkansas, then west on Interstate 40 to Alma and north on Interstate 40, all of which virtually consists of four lanes. It is quicker even though it is an additional 40 miles in length.

That stark contrast is hurting north Arkansas economically, particularly the region between the two corners, said Gil Losurdo, a semi-retired businessman from the Baxter County community of Clarkridge, an unincorporated area near the Missouri border.

Losurdo is managing director of the nonprofit North Arkansas East-West Corridor Association, which was formed three years ago to promote development of the U.S. 412 corridor.

He notes that much of the eastbound trucking that originates in Northwest Arkansas goes up to Missouri and over rather than take U.S. 412. He contends the state loses out on the revenue that those trucks generate through gas revenue to Missouri as a result.

"But we're also losing the opportunity to bring new businesses in here," Losurdo said. "Every time we come to somebody, they say, 'We'd love to come down here, but you can't get there from here.' They have no ability to bring in unfinished goods and send out their finished goods."

The residential sector is hurting as well. No longer do the blue-collar workers from Illinois and Iowa flock to the region between Bull Shoals Lake and Norfork Lake to retire. They either don't exist or are frustrated about the lack of easy access into and out of what is known as the Twin Lake area, Losurdo said.

The U.S. 412 study said its traffic modeling showed that traffic volumes would increase and lent support to a study by Michael Pakko, an economist at the University of Arkansas at Little Rock, that concluded economic development in northern Central Arkansas, connected by U.S. 412 to two of the most dynamic regions of the state, constituted "unexploited potential."

Losurdo, whose organization is scheduled to meet with agency officials Aug. 4, expressed unhappiness with the piecemeal work that has been done.

"What they've been doing to satisfy everybody is a two-mile patch here from two to three lanes and another patch around the curve," he said. "It's extremely sporadic and it doesn't give you any ability to try to drive straight through from Harrison to Huntsville or Mountain Home to Harrison."

Some work has recently been completed or is ongoing on the route. The first segment of the Springdale Bypass was completed two years ago at a cost of $100 million. About 25 percent of the work is complete on a $58.5 million project to widen to four lanes a 14.5-mile segment on U.S. 412 from U.S. 67 in Lawrence County to Arkansas 141 in Greene County.

A total of $160 million worth of work focused on U.S. 412 is contained in the ongoing 2019-2022 Statewide Transportation Improvement program.

If voters approve Act 1 in November, $340 million over 20 years would become available for the route, according to Arkansas Highway Commission plans. The ballot initiative would make permanent the statewide 0.5% sales tax for road construction.

The initiative includes $180 million to complete the bypass, $100 million to improve selected sections between Huntsville and Black Rock and $60 million for work in and around Harrison.

Philip Taldo, a member of the commission from Springdale, said improving the route makes strategic sense for other parts of the state, noting that it could provide relief for Interstate 40 between North Little Rock and Memphis by picking up traffic from the north and the west.

Taldo said the challenges facing U.S. 412 might not be as daunting as other priority routes, such as Interstate 49 south to Texarkana. But he said he has learned that 20 years "isn't a long time in road construction."