BENTON — The earliest Europeans known to have set foot in present-day Arkansas are depicted in downtown Benton's huge outdoor mural. The painting aims to portray life since the 16th century in what is now Saline County.

At 35 feet high and 145 feet long, "The Benton Mural" ranks with the largest of the outdoor paintings proliferating in Little Rock. Its oldest scene shows the 1541 encounter of Spaniard Hernando de Soto and his expedition with members of the Caddo Nation.

That scene may come under scrutiny, given the resurgent efforts to eliminate American Indian images and nicknames from sports teams and other entities. But artist Dianne Roberts told an Arkansas Democrat-Gazette reporter when she and Texan Mark Davey were completing the mural in 2014 that she had consulted for accuracy with leaders of the Caddo Nation in Oklahoma City.

"I wanted these figures to be as true to life as possible," Roberts said. The pictured Caddos include a chief in a regal coat of fur skins, a warrior armed with bow and arrow, and two women cooking over open fires.

All the people in the mural were painted from photographs that Roberts and Davey took of Saline County residents dressed in period costumes, some borrowed from the Royal Theater's wardrobe closets.

The mural's images proceed to a ferry crossing the Saline River, a bridge that replaced the ferry, a covered wagon, two loggers felling a tree, a Black woman picking cotton, a Black man with two mules harnessed to a cotton load, a passenger train pulled by a steam locomotive, a farmer and wife hoeing and a Niolak potter at work. The timeline ends around 1900.

"It's about hardworking everyday people," Roberts said six years ago. "It's about how they lived and worked even while important things were going on around them, like slavery, the Trail of Tears and the Civil War. It's like taking pictures of your children. You don't want to show the bad times. You just want to showcase the good times." 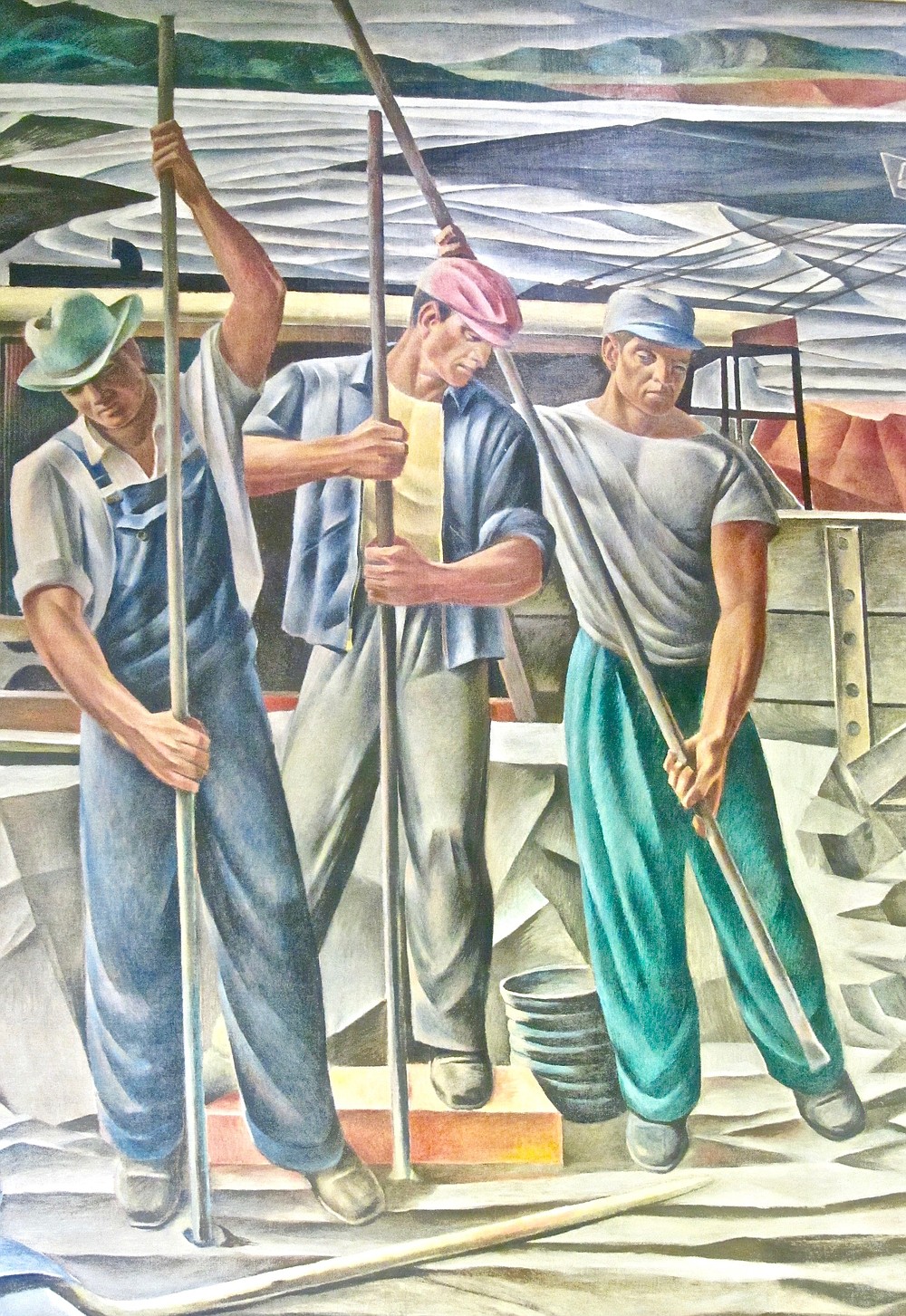 Created in a New Deal program during the Great Depression, Bentons Bauxite Mining mural can be seen in the Saline County Courthouse. (Special to the Democrat-Gazette/Marcia Schnedler)

The mural is painted on the Bell Building at 104 River St. along the old Southwest Trail. That route ran from the mouth of the Missouri River near present-day St. Louis to Fulton on the Red River in Arkansas.

Outdoor murals are the current vogue. During the Great Depression that was finally ended by World War II's economic surge, indoor murals were the focus of a New Deal program sponsored by the U.S. Treasury Department's Section of Fine Arts.

A vivid specimen of those murals can be seen at Benton inside the Saline County Courthouse. The art, titled "Bauxite Mining," is one of 19 surviving works created for U.S. post offices in Arkansas between 1938 and 1942. A dozen are still displayed in their post offices. The rest have been moved to other buildings such as the courthouse in Benton, open during business hours Monday through Friday.

Texas artist Julius Woeltz was paid $750 to create the Benton mural. He chose the theme of bauxite mining because it was then a major Saline County industry. Information from the University of Central Arkansas notes that Woeltz "completed his final cartoon for the mural just four days after the bombing of Pearl Harbor. Since bauxite is the raw material used to make aluminum for the production of aircraft, the subject matter was quite timely."

The mural, 6-by-12 feet in size, is richly colored. It shows the operations of an open-pit mine with three aspects of the labor: drilling holes for dynamite to loosen the ore, loading bauxite onto carts and a worker pausing to get a drink of water during the hard work.

The post-office art and other similar federal programs are credited by the UCA posting as "changing the relationship between art and society. Art's elitist sphere was democratized. The New Deal essentially bridged the gap between art and society by stitching a new democratic being out of the two separate worlds, all the while literally saving a generation of artists who would have been lost to the struggles of the Depression."

Given the abundance of public art in the 21st century, it's easy to overlook how innovative the New Deal murals were in their day — and how much pleasure they have given to viewers in the eight decades since.