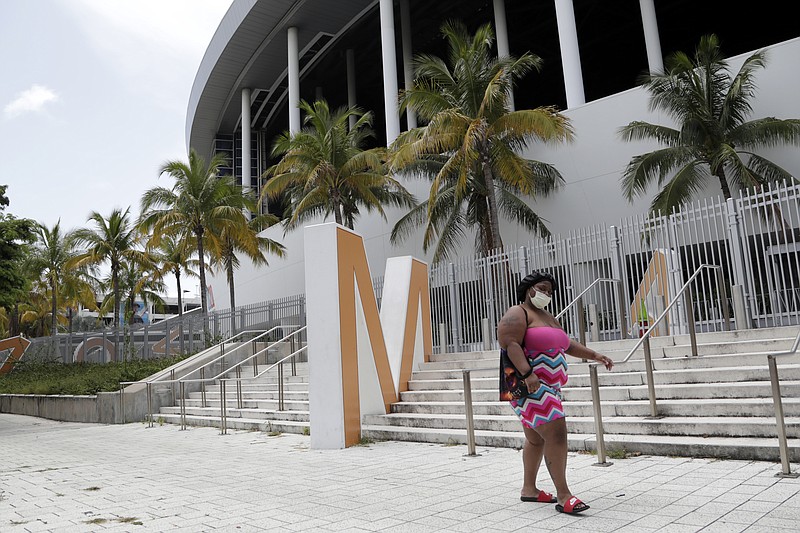 A woman wearing a protective face covering walks past Marlins Park, Monday, July 27, 2020, in Miami. The Marlins home opener against the Baltimore Orioles on Monday night has been postponed as the Marlins deal with a coronavirus outbreak that stranded them in Philadelphia. (AP Photo/Lynne Sladky)

MIAMI -- The Miami Marlins scrambled for roster replacements as they coped with a coronavirus outbreak. The New York Yankees had an unscheduled day off in Philadelphia while the home team underwent covid-19 tests. The Baltimore Orioles were flying home from Miami without playing a game.

And Washington Nationals Manager Dave Martinez summed up the situation in a season barely underway.

"I'm going to be honest with you: I'm scared," Martinez said.

Two major league games scheduled for Monday night were postponed after more than a dozen Marlins players and staff members tested positive for covid-19 in an outbreak that stranded the team in Philadelphia.

The Marlins' home opener against Baltimore was called off, as was the Yankees' game at Philadelphia. The Yankees would have been in the same clubhouse the Marlins used last weekend.

Nine Marlins players on the 30-man roster, two taxi squad players and two staff members tested positive, a person familiar with the situation told The Associated Press, speaking on condition of anonymity because the results hadn't been publicly disclosed.

The Yankees are staying in Philadelphia and have their own clubhouse staff with the team there, the person said. The Marlins postponed their flight home Sunday night after their series finale against the Phillies.

The Orioles planned to return to Baltimore from Miami on Monday night, an indication their scheduled game today against the Marlins won't take place at Marlins Park.

The Marlins' outbreak was the talk of baseball Monday, and the Nationals' manager choked on his words as he discussed the situation. Martinez missed time last season because of a heart condition, and the Nationals are scheduled to play in Miami this weekend.

"My level of concern went from about an eight to a 12. I mean this thing really hits home now," Martinez said. "I got guys in our clubhouse that are really concerned, as well."

Major League Baseball announced the postponement of both games about eight hours before the scheduled first pitch, and said additional covid-19 testing was being conducted. That included Phillies players being tested Monday.

"The members of the Marlins' traveling party are self-quarantining in place while awaiting the outcome of those results," MLB said in a statement.

"Now we REALLY get to see if MLB is going to put players health first," tweeted Los Angles Dodgers pitcher David Price, who opted out of playing this season. "Remember when Manfred said players health was PARAMOUNT?! Part of the reason I'm at home right now is because players health wasn't being put first. I can see that hasn't changed."

Dr. Andrew Morris, a professor of infectious diseases at the University of Toronto, said the Marlins' outbreak isn't a surprise because Manfred's plan was seriously flawed.

"Baseball is in huge trouble," Morris said. "It makes me wonder if they are listening to the advice of experts or whether their experts are giving them good advice. This was not a plan anyone who knows what they are talking about would have conceived. It's playing out like it was supposed to play out."

The Marlins placed infielder Garrett Cooper, outfielder Harold Ramirez and right-hander Jose Urena on the injured list. They claimed right-hander Justin Shafer and left-hander Josh Smith off waivers from Cincinnati, and will likely rely heavily on reinforcements from their training camp in Jupiter, Florida.

Because there are no minor league games this season, teams are allowed to retain 60 players each, including a taxi squad of up to three players for every road trip, giving them immediate options to replace an ailing player.

The Marlins could bus from Philadelphia to Baltimore for scheduled games there Wednesday and Thursday. Marlins CEO Derek Jeter released a statement saying the health of players and staff was his organization's primary focus.

"Postponing tonight's home opener was the correct decision to ensure we take a collective pause and try to properly grasp the totality of this situation," Jeter said.

Urena was scratched from his scheduled start in Sunday's game, and catcher Jorge Alfaro went on the injured list Friday. No reasons were given for the moves, and it was unclear when the Marlins received the latest positive test results.

Atlanta might have been the source of the Marlins' outbreak. They played exhibition games there last Tuesday and Wednesday against the Braves, who have since been without their top two catchers, Tyler Flowers and Travis d'Arnaud, after both showed symptoms of covid-19.

"I think it's really important to trace how it occurred. That's the one thing we need to know first before you jump to a lot of different conclusions," Los Angeles Angels Manager Joe Maddon said.

"If there was a breach of protocol by any of those players, then it's more easily explainable, and if not, then it becomes more problematic. I would just wait and see, let them trace things back, try to figure out why it occurred, and then you start creating your conclusions or drawing your plan up to solve it."

Milwaukee Brewers Manager Craig Counsell said that in the wake of Marlins' outbreak, his team will double down on efforts to be safe.

"This was a huge punch to the face, a realization that we have to be perfect," Counsell said. "It feels like a tough task, but we're going to try and get it right." 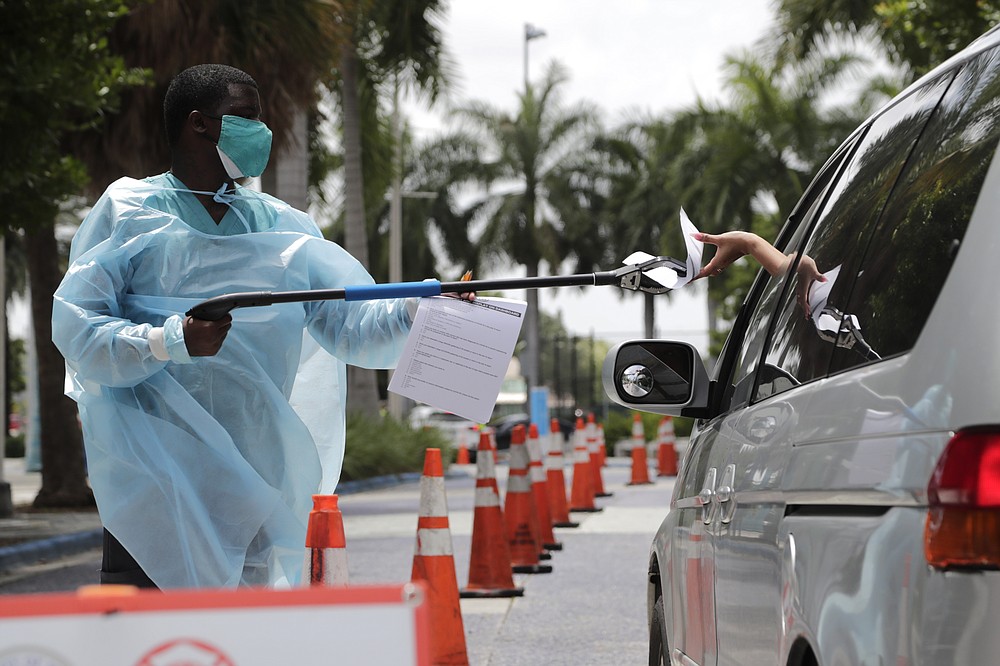 Healthcare worker Dante Hills, left, passes paperwork to a woman in a vehicle at a COVID-19 testing site outside of Marlins Park, Monday, July 27, 2020, in Miami. The Marlins home opener against the Baltimore Orioles on Monday night has been postponed as the Marlins deal with a coronavirus outbreak that stranded them in Philadelphia. (AP Photo/Lynne Sladky) 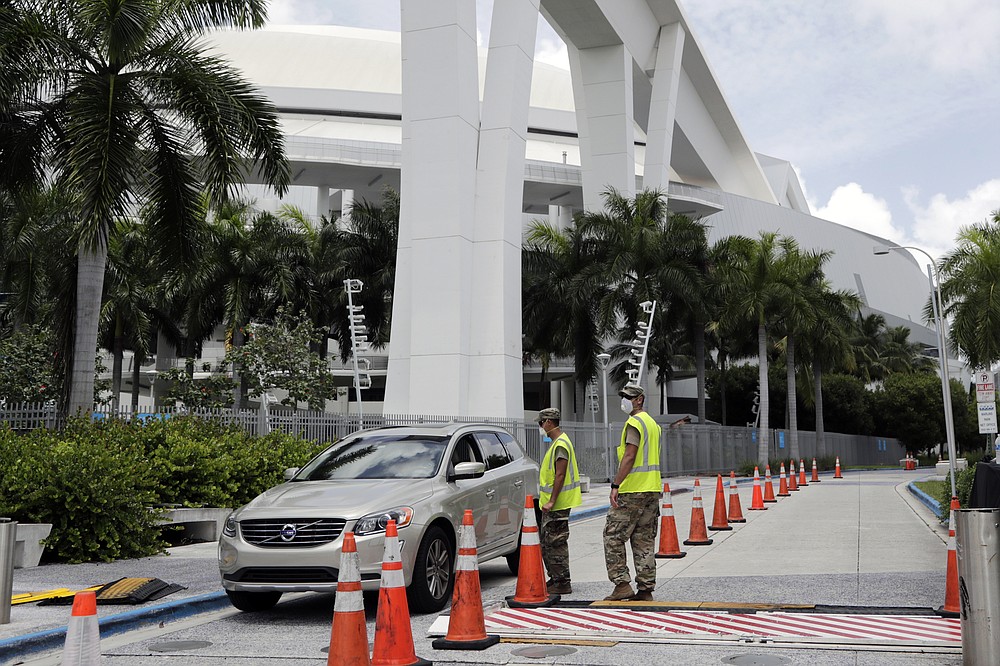 Members of the Florida National Guard monitor vehicles at a COVID-19 testing site outside of Marlins Park, Monday, July 27, 2020, in Miami. The Marlins home opener against the Baltimore Orioles on Monday night has been postponed as the Marlins deal with a coronavirus outbreak that stranded them in Philadelphia. (AP Photo/Lynne Sladky) 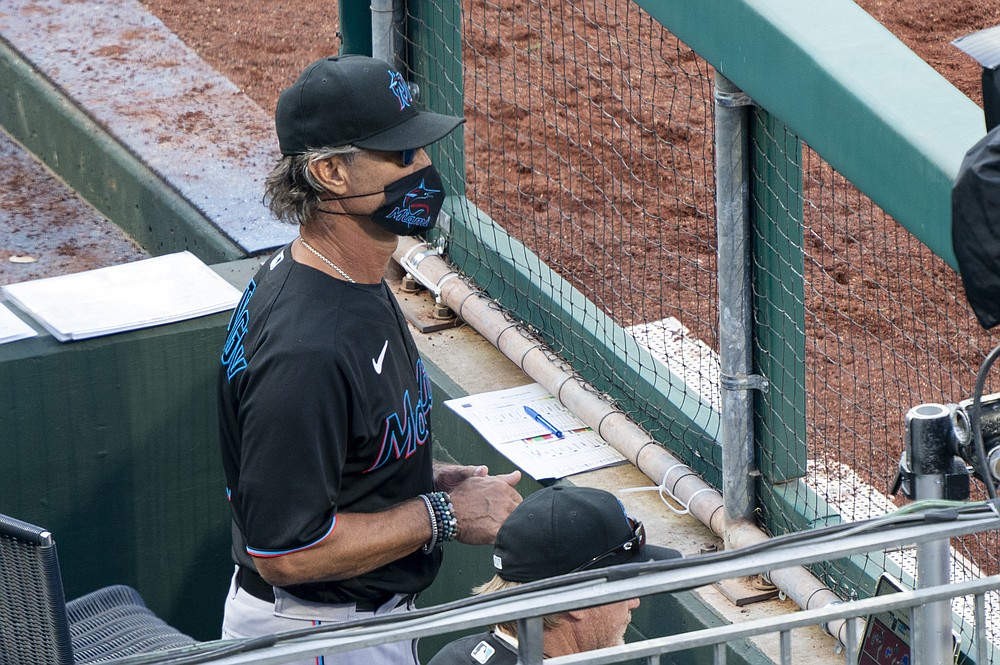 Miami Marlins' manager Don Mattingly looks out from the dugout during the eighth inning of a baseball game against the Philadelphia Phillies, Saturday, July 25, 2020, in Philadelphia. (AP Photo/Chris Szagola) 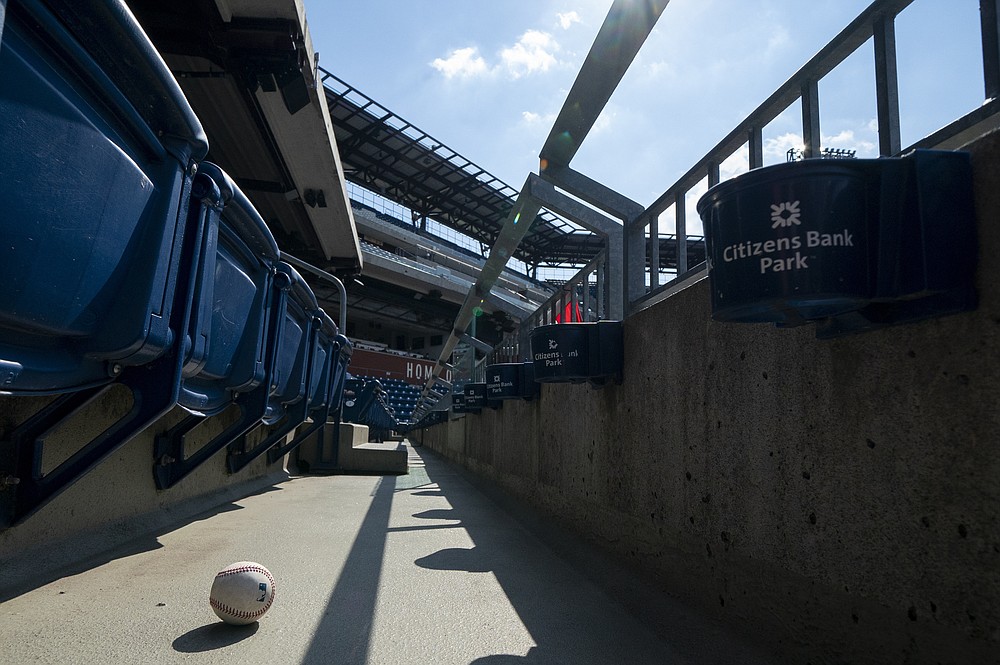 A foul ball that was hit into the stands sits on the floor of an empty stadium during the eighth inning of a baseball game between the Miami Marlins and the Philadelphia Phillies, Sunday, July 26, 2020, in Philadelphia. (AP Photo/Chris Szagola)
ADVERTISEMENT