Russellville manages to hang on for another day 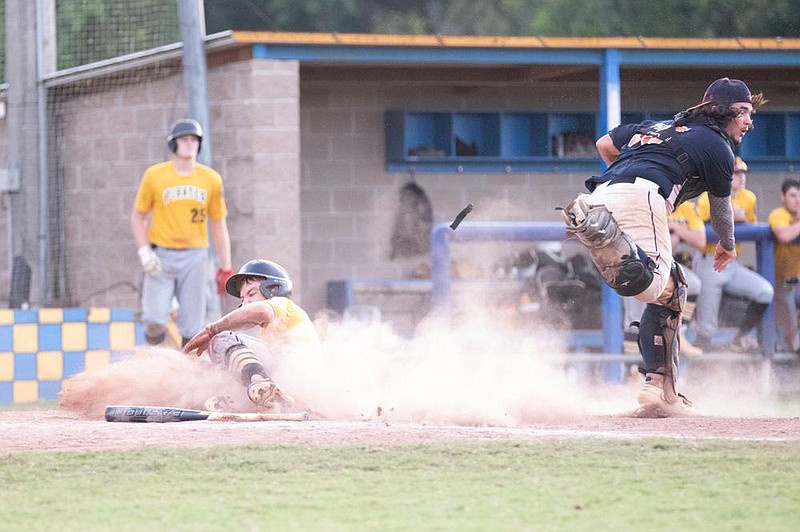 SHERIDAN -- Russellville center fielder Ben Jones was not content with just reaching first base in the bottom of the ninth inning of his team's win-or-go-home matchup with Fort Smith on Monday night.

"My thought was to steal as much as I can, and I knew Ty Toland would get that big hit," Jones said.

Which is exactly what Toland did, lining a single to center field to score Jones from third base with the winning run in a 6-5 victory.

Russellville, which trailed 4-1 after two innings and lost its manager, Dave Dawson, who was thrown out in the bottom of the second, did just enough to stay alive in the AAA American Legion State Tournament at Sheridan Sports and Recreation facility.

The victory moved Russellville (32-7) into another win-or-go-home matchup at 5:30 today against Sheridan, which defeated Bryant 5-3 in Monday's late game.

The Russellville-Sheridan winner meets Fort Smith's Sportsman, who had a spot in the championship game locked up even before playing Monday night.

Yes, a victory Monday night would have given Fort Smith two chances to win the state title, but shortstop Matt Schilling said the team is still pleased with its position.

"Yeah, if we win, we have to lose twice," Schilling said, "but now it's like a real championship game."

Fort Smith didn't make it easy on Russellville, jumping out to a 4-1 lead after two innings, and then battling back to tie the game at 5-5 in the top of the seventh after Russellville scored the go-ahead run on a balk in the bottom of the sixth. 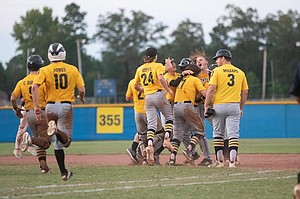 Fort Smith hung tough after Russellville loaded the bases with one out in the bottom of the seventh, bringing in right fielder Kent Carlisle to play behind second base in a five-man alignment.

Reliever Bryce Waters retired Ty Hipps on a pop-up to catcher Logan Bolin then struck out Toland, who replaced Cole Hathcote in the lineup.

Russellville was frustrated again in the bottom of the eighth after loading the bases with no outs against Bryce Waters. Jayce Pressley was brought in to pitch, and he got Kaleb Tramel to hit a grounder to third baseman Dakota Peters, who threw home to force Cole Dawson at the plate and Fort Smith catcher Bolin fired to first to complete a double play.

Pressley struck out Brandon Bunton to end the threat, but he could not escape trouble in the bottom of the ninth.

Jones singled to right field to lead off, stole second and advanced to third when Pressley's pitch to Ty Hipps was blocked by Bolin, but got away just far enough for Jones to advance.

"It was in the dirt," said Jones, who scored two of Russellville's run, "and Coach Dawson taught me anytime it's in the dirt, you're running."

Jones said Russellville did not have time to get down on themselves when they failed to score in the seventh and eighth innings.

"The biggest thing, is if it's our last game then you better not play with pressure. Play to have fun. Anytime you're having fun playing baseball, something turns out good."