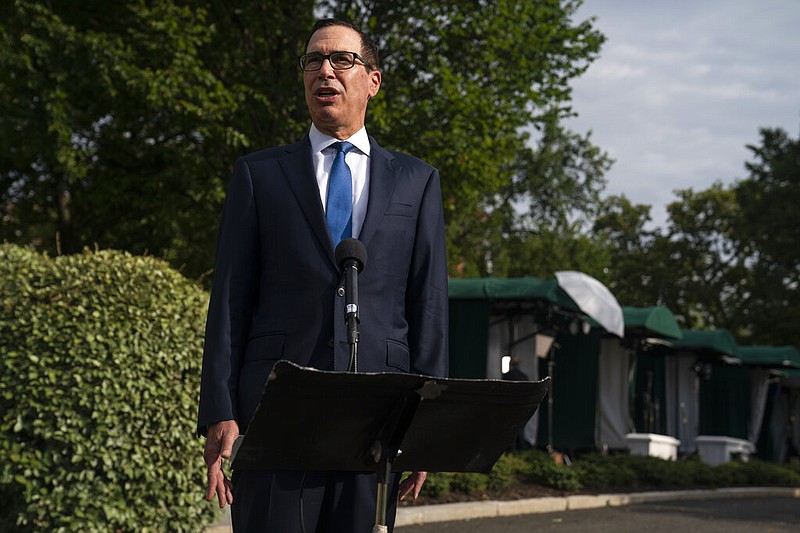 WASHINGTON -- A showdown over the next coronavirus relief bill got underway Monday as Senate Republicans unveiled a $1 trillion package and congressional Democrats sat down with top White House officials.

House Democrats have coalesced around the $3 trillion plan they passed in May, and the parties face a tight deadline for a breakthrough as expanded jobless aid benefits are set to expire Friday.

Pelosi implored the White House and GOP lawmakers to stop the infighting and come to the negotiating table. "Time is running out," she said.

"I'm bitterly disappointed and frustrated by their delay and by the inadequacy of their product," Schumer said.

At the same time elsewhere in the Capitol, Majority Leader Mitch McConnell, R-Ky., and some of us his top lieutenants were briefing reporters on the package of bills assembled as the GOP starting point.

At the same time, the White House was suggesting that a narrower relief package might be all that's possible with Friday's approaching deadline. Administration officials have cited unemployment benefits, money to help schools reopen, tax credits to keep people from losing their jobs and lawsuit protections for schools and businesses as priorities for quick relief.

"Children are hungry, families cannot pay the rent, unemployment is expiring and the Republicans want to pause again and go piecemeal," Pelosi said. She urged them to come to her office "and get the job done."

McConnell and his team worked for days to try to put together a package that could unite Republicans in a way that would strengthen their negotiating power with Democrats.

"Senate Republicans have offered another bold framework to help our nation," McConnell said.

But conservative Republicans quickly broke ranks, arguing the spending was too much and priorities misplaced. Half the Republican senators could vote against the bill, some warned, and their opposition leaves McConnell heading into negotiations without the full force of the Senate majority behind him.

Congress already pumped $3 trillion into the economy in March and April, a level that many Republicans believe is sufficient.

"There is significant resistance to yet another trillion dollars," said Sen. Ted Cruz, R-Texas. "The answer to these challenges will not simply be shoveling cash out of Washington; the answer to these challenges will be getting people back to work. And as it stands now, I think it's likely that you'll see a number of Republicans in opposition to this bill and expressing serious concerns."

House Democrats have proposed extending the $600 benefit through January because the jobless rate remains very high.

Republicans want to put the $200 in place until states can implement a new approach that would pay the unemployed 70% of the income they collected before they lost their jobs. The states are supposed to phase in the new formula within two months, though it's unclear how cumbersome that process could prove to be.

The $200 weekly payment in the meantime would come on top of whatever unemployment benefits that states already pay. State benefits vary but generally replace 45% of a worker's wages.

White House officials, Republican lawmakers and some business executives have complained that the $600 payment has created a situation where some Americans are paid more to stay home than to return to their jobs.

Democrats oppose both curbing the benefit amount and transitioning the payment system to the new model. They counter that the money serves as an emergency cushion for millions of Americans displaced by the labor market's sudden changes, particularly when many states are reversing reopening plans, and they point out that state unemployment offices have already been overwhelmed and would struggle with any further changes.

The legislation also includes a new round of $1,200 checks to individual Americans; billions of dollars for schools, with some of the money aimed at helping classrooms reopen; and a five-year lawsuit protection for businesses, health care providers and others.

The $1,200 payments would largely follow the same parameters as the payments approved in March. There are some new restrictions in the GOP plan, such as blocking dead people and prisoners from receiving the benefit, and tweaking the eligibility of dependents so they can get the $500 supplement even if they are older than 17.

The legislation also includes at least $100 billion more for the small-business Paycheck Protection Program. It does not contain any new money for state and local governments -- a key Democratic demand -- but instead gives state and local leaders additional flexibility in spending the $150 billion approved in the CARES Act in March.

Over initial Trump administration objections, the GOP plan contains billions of dollars for coronavirus testing and tracing, the Centers for Disease Control and Prevention, and foreign assistance related to the virus. It also includes tax credits to encourage businesses to hire and retain workers, and increased business deductions for meals and entertainment.

The GOP legislation contains a number of provisions not directly related to the coronavirus, including $1.8 billion for construction of a new FBI headquarters in Washington, D.C. Trump has taken a personal interest in this project, but White House officials have not stipulated why they believe it needed to be inserted in the coronavirus bill. Critics have alleged Trump is trying to keep the FBI building at its current location, which is near a Trump hotel property in downtown D.C.

The Trump administration previously squashed a plan to relocate the FBI building to the suburbs, which could have left the lot near the Trump hotel open for development.

"That's a good question," said Senate Appropriations Chairman Richard Shelby, R-Ala., when asked what the FBI project had to do with the coronavirus. He said the administration had sought its inclusion.

Under a measure spearheaded by Sen. Tim Scott, R-S.C., the legislation also offers a 100% deduction on business meals through the end of 2020 -- a measure Trump has boosted as a way to encourage people to support hard-hit restaurants. Experts have pointed out that few businesses are paying for their employees to eat out during the pandemic.

The legislation also includes a proposal from Sen. Lindsey Graham, R-S.C., aimed at bringing production lines back to the United States from China; legislation by Sen. John Cornyn, R-Texas, that would increase incentives for advanced chip manufacturing; and a measure written by Sen. Rob Portman, R-Ohio, that would address intellectual property theft at federally funded research centers and universities.

Information for this article was contributed by Erica Werner, Jeff Stein, Seung Min Kim and Renae Merle of The Washington Post; and by Lisa Mascaro, Andrew Taylor, Darlene Superville and Hope Yen of The Associated Press.