State lawmakers on Tuesday agreed to send $7 million in federal funds to Northwest Arkansas to help rein in an outbreak of the coronavirus that has caused a disproportionate number of illnesses in the region's Hispanic and Marshallese communities.

The decision to appropriate the funding -- along with $16 million in additional federal funding for contact tracing across the state -- came as a reversal from Friday's meeting of the Legislative Council, when a number of conservative lawmakers voted to delay action on either proposal after raising concerns about the pace at which the Arkansas Department of Health was requesting new money to fight the virus.

Friday's decision prompted much public scrutiny by those who pointed out that minority communities have borne the worst of the virus outbreak in Northwest Arkansas.

A field team from the U.S. Centers for Disease Control and Prevention sent into Northwest Arkansas reported earlier this month that nearly 7 in 10 adults to have tested positive for the virus in Benton and Washington counties were either Hispanic or Marshallese. Many of the cases in both communities have been linked to work in poultry plants, the CDC report found.

Attempts to mitigate the spread of the virus among Northwest Arkansas' Marshallese and Hispanics have been hampered by language barriers and poor response rates to contact tracing, according to CDC and state Health Department officials.

Rep. Megan Godfrey, D-Springdale, whose district includes many Hispanics and Marshallese, expressed gratitude Tuesday that the Legislative Council reconsidered the item after the initial delay.

"This was not only necessary as a monetary appropriation, but it is a gesture of goodwill and community and showing that we are all in this together as Arkansans," Godfrey said.

Others, meanwhile, were intent on focusing their line of questioning in a different direction.

Three lawmakers pressed representatives from the Health Department during Tuesday's hearing to say whether they were suppressing the use of hydroxychloroquine, a drug touted by President Donald Trump to fight the coronavirus but not authorized for that use by the U.S. Food and Drug Administration. Health Department Chief of Staff Stephanie Williams said no such policy was in place.

The two providers, General Dynamics and the Arkansas Foundation for Medical Care, have hired about 500 agents for contact tracing, of which about 60 are bilingual, according to testimony from the vendors' representatives. One of those workers speaks Marshallese.

The $7 million targeted toward minority-group communities in Northwest Arkansas, which comes from the federal Coronavirus Aid, Relief, and Economic Security Act, will be distributed to several providers to hire 66 bilingual contact-tracing staff members, 30 case-management staff members and 20 testing workers, according to Dr. Pearl McElfish, a vice chancellor at the University of Arkansas for Medical Sciences Northwest.

Hammer and other lawmakers expressed frustration that the Health Department had not used more of the $22 million already appropriated for contact tracing for outreach into minority communities. After approving an additional $16 million for general contact tracing on Tuesday, Rep. Jim Dotson, R-Bentonville, attempted to have funding earmarked for Northwest Arkansas cut by $3 million, with instructions for the Health Department to make up the difference from the previously approved appropriation. That effort failed on a voice vote.

"I'm voting no because of the process and the accountability factor," Hammer explained later as he and a dozen other Republicans voted against the $7 million appropriation for minority groups in Northwest Arkansas.

The attempt to slash funding for the Marshallese and Hispanic communities prompted animated remarks from Senate President Pro Tempore Jim Hendren, R-Sulphur Springs, who noted that many Marshallese in Arkansas already deal with chronic health issues, some as a lingering result of the U.S. military's use of the Marshall Islands as a nuclear-weapons test site.

The vote to approve the aid to Northwest Arkansas as well as the general contact-tracing appropriation both passed by a vote of 35-13.

In a statement Tuesday, Hutchinson praised the "quick action" by the Legislative Council to approve both appropriations. He had criticized lawmakers' decision to delay action on the proposal, warning that the state would have to forfeit federal funds if it failed to approve their appropriation.

"This is the time for us to use all of our tools to fight the virus," the governor said Tuesday. "The approval today allows us to take another important step to control the spread and to be in a better position when school starts."

A third item that lawmakers had delayed consideration of last week, a $300,000 appropriation to fund a coronavirus grant program at the Arkansas Black Hall of Fame, was not considered Tuesday, after it was voluntarily pulled from the calender by the Health Department. 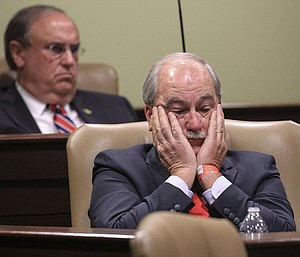 Photo by Staton Breidenthal
Sen. Kim Hammer listens to discussion about contact tracing Tuesday during the Legislative Council meeting. Hammer, who voted against the funding, repeatedly questioned contractors about their qualifica- tions and ability to hire Marshallese and Spanish-speaking workers. (Arkansas Democrat-Gazette/Staton Breidenthal) 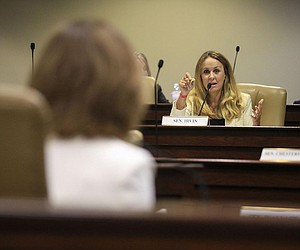