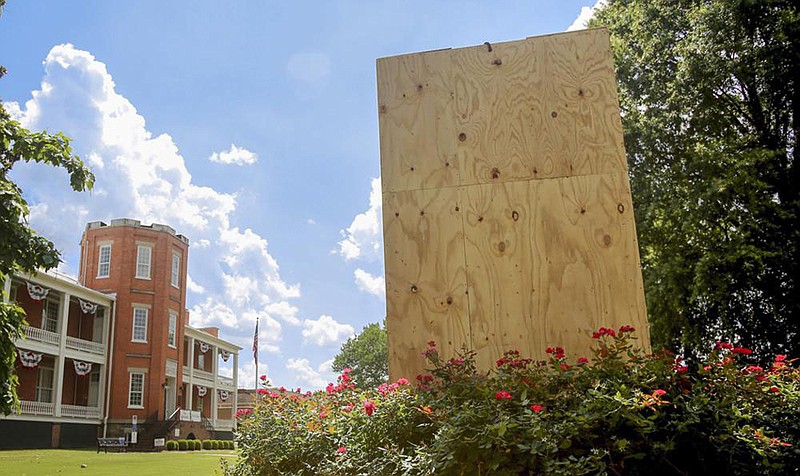 A Confederate monument outside the MacArthur Museum of Arkansas Military History in Little Rock was removed on Thursday and the statue’s pedestal has been boarded up after it was vandalized. (Arkansas Democrat-Gazette/Thomas Metthe)

Grant funding tied to an easement on property that once was the site of a Confederate statue at a downtown Little Rock park will be redirected to support the construction of a statue of civil-rights leader Daisy Bates in the U.S. Capitol, according to an agreement being worked out by Mayor Frank Scott Jr. and Gov. Asa Hutchinson.

In mid-June, Scott ordered the removal of a bronze statue of a lone Confederate soldier, known as "Memorial to Company A, Capitol Guards," from its podium at MacArthur Park amid protests that occurred across the city and the nation following the deaths of George Floyd and other Black men and women at the hands of police officers.

A 2017 grant agreement allotting the city $100,000 from the Department of Arkansas Heritage to restore the building that now houses the MacArthur Museum of Military History placed the property where that statue was located under a state easement.

"Governor Hutchinson and I worked on a very amicable agreement that we will continue to work on," Scott said while updating city directors of the negotiations at the end of a policy meeting Tuesday evening. "This is, you know, very notable and thoughtful from Governor Hutchinson to transition those dollars to the Daisy Bates statue that will be built in our nation's Capitol."

Details of the agreement have yet to be finalized, Scott's spokeswoman Stephanie Jackson said Tuesday evening. It was not immediately clear how much money would go toward Bates' statue.

Arkansas passed a law last year calling for the replacement of century-old statues representing Arkansas in the U.S. Capitol with likenesses of Bates, who was a mentor to the Little Rock Nine, and Johnny Cash, the Arkansas-born musician. Currently, the Arkansans memorialized in the U.S. Capitol's Statuary Hall are late attorney and former American Bar Association president Uriah M. Rose and late U.S. Sen. and Gov. James P. Clarke.

Clarke's positions on race, including a statement from an 1894 speech about preserving "white standards of civilization," were brought up while the law was being drafted and debated. Rose was a secessionist.

New statues have not been sculpted. The Arkansas Secretary of State's office has an unfunded appropriation of $750,000 for the replacement effort. Only one private donation has been made toward the effort to replace the statues, a $100,000 gift from Walmart Inc., the Arkansas Democrat-Gazette reported earlier this month.

Hutchinson said in a written statement Tuesday evening that he would support the $100,000 payment going toward the statues.

"The details are still being worked out, but putting the easement payment of $100,000 toward the legislative directed statues in National Statuary Hall is a remedy that I would support," the governor said.

Scott noted Tuesday that Bates was a native of Little Rock, as well as one of the only women to speak at the March on Washington in 1963.

He said the statue in MacArthur Park and two markers commemorating David O. Dodd, a teenager hanged as a Confederate spy in 1864, were removed amid the "social and civil unrest" that followed the recent killings of Floyd in Minneapolis and others, including Breonna Taylor in Louisville, Ky., and Ahmaud Arbery in Glynn County, Ga.

"As a result of safety concerns and response to safety in our nation's justice movement, the city removed the Capitol Guard statue at MacArthur Park along with other Confederate markings," Scott said.

In a written statement the week the Capitol Guard statue was removed, Scott said the statue did not contextualize the painful legacy of the soldiers' actions, nor the oppression of the Jim Crow era, when it was erected.

He went on to say that the Confederate unit was "memorialized without concern for those in our community who have suffered grave injustices and whose ancestors were viewed as less than human so that they could be subjugated to terror and forced to provide free labor."

City Manager Bruce Moore said during Tuesday's meeting that he had talked with Stacy Hurst, secretary of the Arkansas Department of Parks, Heritage and Tourism, about the agreement to redirect the grant funding.

"I do believe that this will resolve that issue regarding the easement, and I'm supportive of moving forward and that approach," Moore said.

The city is paying $133 a month to house the statue in a temperature-controlled storage unit, Jackson previously told the Democrat-Gazette.

A new location for the statue and Dodd markers has not been announced.