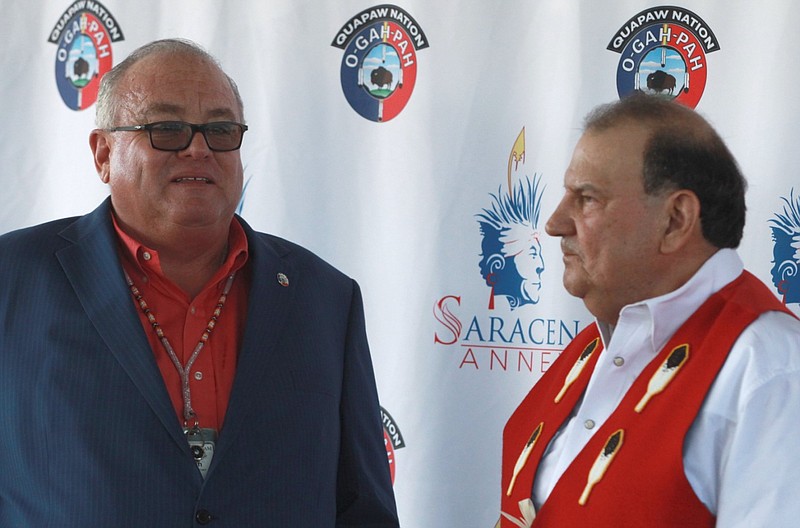 John L. Berrey (left), then chairman of the Quapaw Nation's governing body, talks with Osage Nation member Steve Pratt before the grand opening ceremony of the Saracen Casino Annex in Pine Bluff in this Oct. 1, 2019, file photo. Berrey, a 20-year chairman of the Quapaw Nation, was unseated in his reelection bid on Saturday, July 25, 2020, by Joseph Tali Byrd, 35. CORRECTION: An earlier version of this photo caption incorrectly listed Steve Pratt's affiliation. He is a member of the Osage Nation. ( Arkansas Democrat-Gazette / Dale Ellis)

Pine Bluff and Jefferson County officials are expressing optimism over the future of Saracen Casino as the Quapaw Nation prepares for a change in leadership after Joseph Tali Byrd unseated longtime Chairman John Berrey as head of the Quapaw's governing body.

Byrd, 35, was declared the winner of an election Saturday to determine the leader of the Quapaw Nation after securing 544 votes to Berrey's 325 in unofficial results. Berrey, 61, who has led the Quapaws for the past 20 years, was seeking an 11th two-year term as chairman of the Quapaw Business Committee.

During Berrey's tenure, he oversaw the construction of two casinos in Oklahoma, helped shepherd Amendment 100 to the Arkansas Constitution allowing casinos through the amendment process, and began construction on the $350 million Saracen Casino Resort in Pine Bluff that is slated for completion later this year.

"Congratulations to my opponent, he is young, smart and capable and we will leave things in a much better way then we found them for him," Berrey said in his post. "I have been honored to serve and I look forward to a great future for our Quapaw Nation!"

Chairman-Elect Byrd, who will assume the leadership position at the next meeting of the Quapaw Business Committee on Aug. 15, talked to the Arkansas Democrat-Gazette Wednesday about how he plans to proceed in the area, and he praised his predecessor for the progress he had made during two decades as leader of the Quapaws.

"There were a lot of great things accomplished under his watch and to be able to throw my name in as a candidate was daunting and challenging," Byrd said. "Why I was even interested in running against him was that there were many, many tribal elders who came to me and asked me to do this ... As a deeply tribal person, when your elders ask you to do something, you do it."

Byrd said when he was approached in March of this year to run against Berrey, he was finishing up his final semester of law school at the University of New Mexico, and subsequently graduated with an Indian Law Certificate. He also has a degree in hospitality and tourism management, he said, with experience working at the Quapaw's Downstream Casino.

He said he is looking forward to coming to Pine Bluff to meet with local officials and to get to know the community.

Pine Bluff Mayor Shirley Washington said she believes the city will be able to continue a productive relationship with the Quapaws and said she looks forward to meeting with Byrd.

"We've had a good working relationship with Chairman Berrey from the beginning of this process all the way up to today," Washington said. "We're so far down the road nearing completion of Phase 1 of [the Saracen Casino] project and I hope things will stay on the course as has been planned so far."

The mayor said she is hopeful that she and other officials in the city will be able to forge a close working relationship with Byrd as they had with Berrey to the mutual benefit of Pine Bluff and the Quapaws.

"Chairman Berrey has embraced the city and he believes in Pine Bluff," she said. "He saw the Quapaws as coming home and I hope we can continue that with the Quapaw Nation, embracing Pine Bluff as our joint partnership and home."

County Judge Gerald Robinson said he is also looking forward to meeting Byrd and said he is hopeful that the current relationship Jefferson County has with the Quapaws will continue. Robinson said his primary concern is to determine if the commitments made to the county and the city by Berrey will be continued under Byrd's leadership.

"There are things that are going to be done other than just casino revenues," he said. "I think there is an obligation, even though they are coming to our community and providing jobs, we have other businesses that contribute to good causes in the community to help Pine Bluff and do things to help make Pine Bluff better. I think Saracen Casino falls into that category."

Robinson said he hopes discussions with the new chairman will center upon ways the Quapaws can help contribute to the overall quality of life of the area under the new leadership.

"This is all about us working together and in that we have to develop a relationship, communicate with one another, and that's what we're going to do," he said. "Our role, our efforts, and our attitude still remain the same and we're going to do whatever we can to foster that relationship and do what's best for Jefferson County."

Byrd said that although he is not familiar with Jefferson County, having only passed through Pine Bluff in the past, he said he feels a connection to the area, and he expressed confidence that the relationships forged in Pine Bluff will continue to grow.

"There's a reason that we partnered with them on this project," he said. "Obviously, one of the reasons is those are our ancestral homelands to the Quapaw people so we hold that entire area in a special place in our heart."

Another reason for the partnership, he said, is a deeply rooted commitment among the Quapaws to engage in community building and to have a positive economic impact on the areas in which they do business.

"Pre-Downstream and pre-Indian gaming, our tribe didn't have a lot of profit or a lot of money in the til," he said. "All of my predecessors have had a desire to have an economic impact within the community and to provide a better standard of living for all of the community members.

"That is what I'm excited most about, to get down there and meet these folks and to meet the leaders and to continue to foster this relationship."

Byrd said he hopes to set aside any misgivings or concerns there may be in the area regarding the changing leadership, saying his focus is on moving forward to complete the work that has been started and to keep an eye toward future progress.

"These political administrations change from time to time, but the whole goal is to continue to progress," he said. "To make sure we are continuing on the mission of partnership."