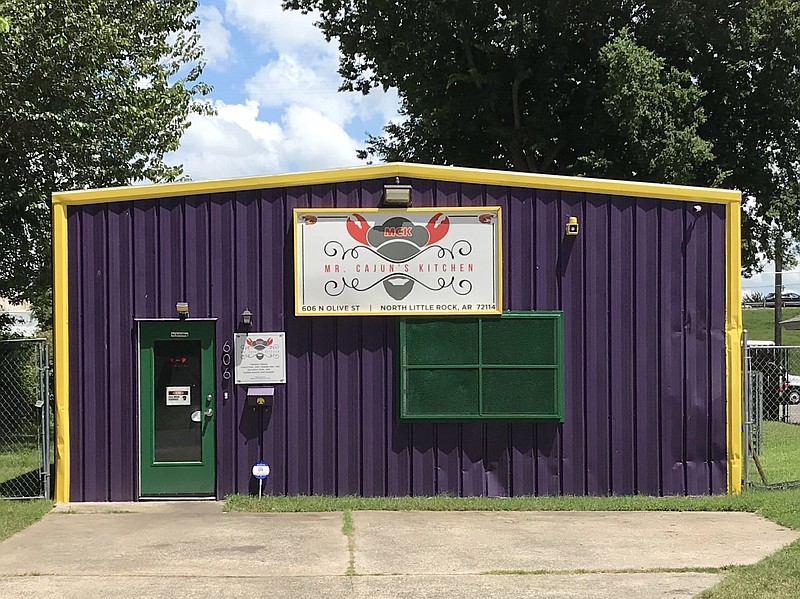 We humans like to think of ourselves as special, and we dearly love when we discover something that the herd hasn't caught onto yet. The Joy of Being In is the obverse of the Fear of Missing Out.

And JOBI is a selfish pleasure. Especially when quantities are limited, we might feel reluctant to let other people in on the secret. Because two things can happen when a lot of people find out about a special product or experience. Either the influx of new adopters ruins the experience (remember when Yogi Berra said that nobody went to his favorite restaurant anymore because it got too crowded?) or demand drives the price up.

If you're shopping for a bottle of Pappy Van Winkle 15-year reserve (list price $100, current market price about $1,150 if you can find one, which you can't), you know what I'm talking about.

At least a part of our enjoyment of some restaurants is being in the select group that patronizes them. Part of what you pay for is the sense of belonging. We all want to be, as Ken Kesey would say, "on the bus." That's why secret decoder rings and sororities exist, to allow us to identify and segregate into tribes. The more people know about it, the less special it becomes. You liked your favorite band a little better before they got their record deal. The deflation you feel when they show up to lip-sync their single on an award shows is a little JOBI leaking away.

If you tell too many people about your perfect dog-sitter, you run the risk that someday you'll call that dog-sitter to ask if she can stay overnight with your precious a couple of months hence and you'll hear: "Um, let me check my calendar ... er, no, that isn't going to work for me, but perhaps we can give you a referral." 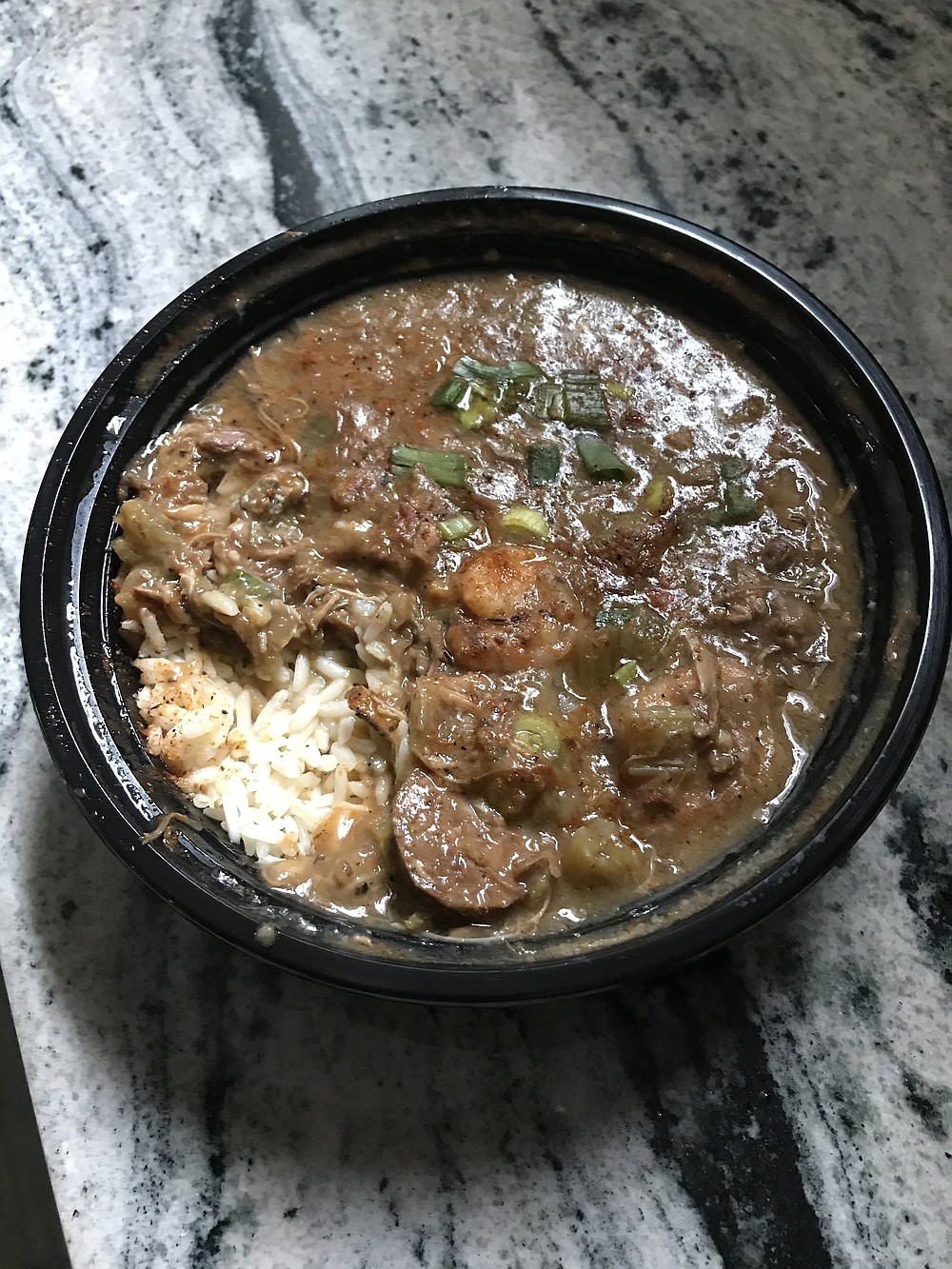 Though its a staple on their ever-changing menu, theres nothing basic about the gumbo at Mr. Cajuns Kitchen. (Arkansas Democrat-Gazette/Philip Martin)

That handyman we told everybody about in the early '90s now flies wheels up. He still takes our calls (out of kindness, I suppose) but he hasn't personally touched a screwdriver (other than the kind with orange juice) in 15 years.

So why write this review of Mr. Cajun's Kitchen?

Too many people know about it already; the first time we attempted to get takeout from them I called 89 times in one afternoon. Because I thought that was what you were supposed to do, phone ahead and pick up your order. Only no one ever picked up the phone. For a moment I suspected that the place was a front, like the Bossier City "doughnut shop" I wandered into when I was 15 years old and in search of a dozen hot glazed. Nicely-Nicely Johnson behind the counter flicked his toothpick up and down: "We don't sell doughnuts, kid. Beat it.")

But after riding my bike past the place I saw that it does exist, in a handsome but basic metal building painted purple with yellow trim a few blocks north of Simmons Bank Arena on shady Olive Street. On some of my recon trips, I noticed parked vehicles lining the street, most with faced-masked people sitting in them like so many getaway drivers. I watched people going in and out of the place, some laden with heavy-looking plastic bags. I concluded it was legit. 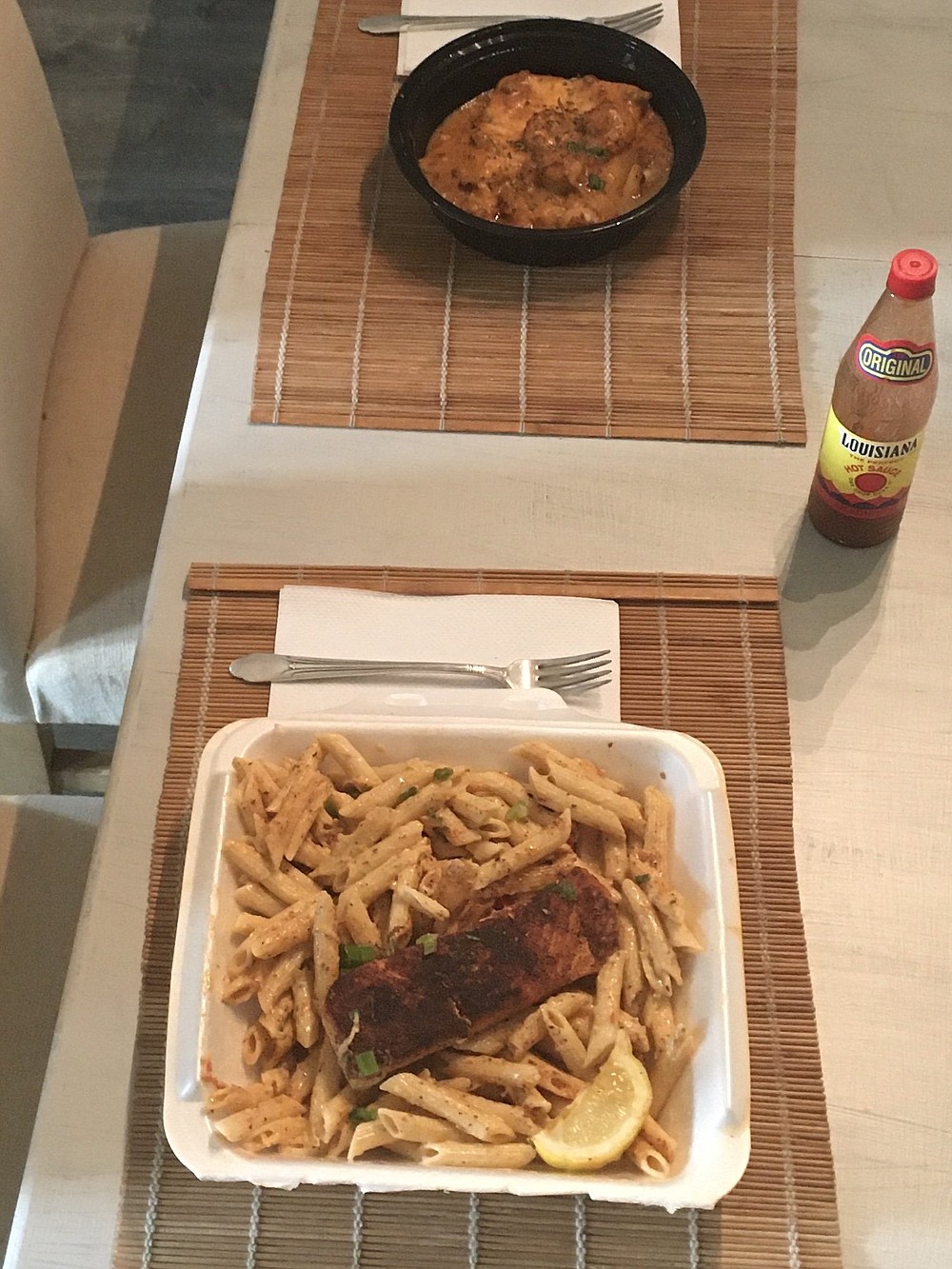 The hot sauce is on the table out of habit, you might not need it all with takeout from Mr. Cajuns Kitchen. (Arkansas Democrat-Gazette/Philip Martin)

And after I checked out its robust Facebook page (facebook.com/606nOlive) I understood the drill. Theoretically, you can call in your order. But good luck with that. Mr. Cajun's, despite having the lowest of profiles, is popular with the cool kids. If you don't have the secret hotline number that puts you straight through to the kitchen (and which probably doesn't exist, but which I'd appreciate if it did) the best thing to do is to is walk in (with your mask on, they're serious about that) and place your order with one of the gracious young women working the counter. She'll take your phone number and ask you nicely to leave the premises. She'll call you in about 20 minutes when it's ready.

What you do in that 20 minutes is up to you. While most people seem to wait in their cars, with the AC and the radio on, you'll have time enough to take a stroll through downtown Argenta, just a couple of blocks to the west. And directly across the street is a pleasant open lot with plenty of trees. Next time I might take a dog or two, make an outing of it. Maybe we'll check the local open container laws ...

Anyway, when they call you, you march up to the gracious young lady and she'll hand you one of those heavy — why does takeout food seem so much more ample than the portions we typically experienced back in the days when we actually went out to eat in restaurants? — plastic bags containing your order. Hustle out and take it home (or wherever) and consume.

As far as the food goes, I think the applicable term of art is "scrumptious." Mr. Cajun's Kitchen specializes in Cajun cuisine, which is distinct from Creole cuisine in that it is generally more rustic and heartier, more homestyle than the filigreed New Orleans delicacies of Antoine's and Galatoire's. Creole dishes include oysters Rockefeller, chicken Clemenceau, crawfish Sardou, frogs legs Provençal, and pommes soufflé — Cajun is considerably less fancy, more rural, more working class.

Or at least it used to be since the opening of the recently closed K-Paul's Louisiana Kitchen in 1979, these two formerly distinct styles have cross-pollinated to the point that often they're used as synonyms. Still, Mr. Cajun's fare feels more like the food you might get at a boudin stand in Tee Mamou than a white tablecloth place in the French Quarter, though none of the dishes we tried lacked subtlety or imagination.

The bulk of the credit goes to Les Bracely, chef/owner of Mr. Cajun's, and a man who, given his skill set, seems to have kept a fairly low profile over the years. We have gleaned that he is a North Little Rock native who studied at the Culinary Institute of New Orleans and, while at Capeo's in the mid-2000s, gave Matt Bell (formerly of South on Main and now executive chef at Gray & Dudley, an upscale Southern restaurant attached to Nashville's 21c Hotel) his first kitchen job. He also has worked as a private chef before opening Mr. Cajun's in January. 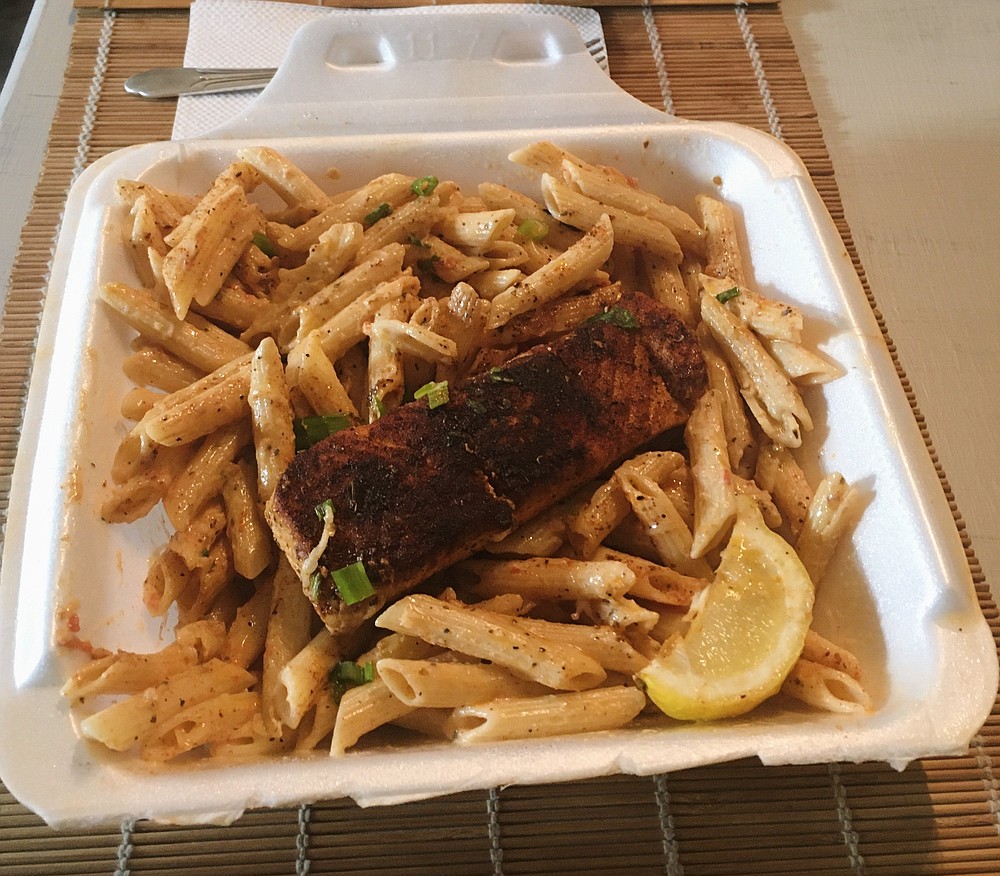 Blackened salmon over pasta is about as upscale fancy as the honest fare from Mr. Cajuns Kitchen gets. The hot sauce in the background is purely optional. (Arkansas Democrat-Gazette/Philip Martin)

As the menu changes frequently, you will obviously need to consult its Facebook page before ordering, but so far we haven't found a weak spot on the menu. Our favorite so far has been its version of "surf and turf"($14.95), which consists of shrimp and bits of slow-roasted beef over rice, a potato, or Cajun fries.

Over Cajun fries the dish is reminiscent of poutine, with a spicy (but not remarkably hot) homemade remoulade drizzled over the top. While shrimp can be tricky, especially if you're reheating a takeout dish (and we always have leftovers), Bracely has a remarkable touch. Mr. Cajun's shrimp are invariably firm but tender, a little resistance yielding to a butter-ish burst of flavor. They go off in your mouth like soft little firecrackers.

We'd also recommend the shrimp and grits ($11.95), in which the little decapod crustaceans are suspended in a satisfyingly creamy bog. It's soul-warming comfort in a bowl. The blackened salmon over Cajun pasta ($11.95) exhibited no carbon, just a touch of char, and the pasta was deftly seasoned. And, as you might expect, Mr. Cajun's gumbo ($9.95) sets a high standard, with its ingredients proclaiming their freshness through a velvety roux. We put hot sauce on the table but weren't compelled to use it much. Bracely's intuition and care permeate his food; even the breadsticks feel a little bit special. 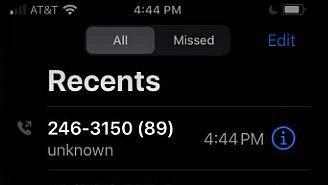 Its not always easy to get Mr. Cajuns Kitchen on the phone, as this screenshot demonstrates. (Arkansas Democrat-Gazette/Philip Martin)

Sure, it's a small sample and there are always challenges with takeout, but Mr. Cajun's travels well and reheats nicely the next evening. He runs out of things. We didn't get to try the homemade banana pudding (rumored to be remarkable) because there was no more to be had.

Mr. Cajun's is open from 11 a.m. to 2 p.m. and 4 to 7 p.m. Tuesday through Friday, and from noon to 5 p.m. Saturday. It is strictly takeout at this time (though under "normal" conditions it could accommodate a handful of tables). Mr. Cajun's main point of interface with the public seems to be its Facebook page, which is updated daily, with a new menu popping up every day or so.

Restaurants are by their nature delicate organisms, and lots of things could upset the wonderful balance of the current Mr. Cajun's experience. One fear is that the simple act of noticing will cause things to change, that more attention and larger crowds will result in a re-ordering of priorities.

But nothing sublime should be taken for granted. And everyone deserves to be in on this.