Treating of virus work in progress

Early on, physicians at a loss by LAURAN NEERGAARD AND NICOLE WINFIELD THE ASSOCIATED PRESS | July 30, 2020 at 5:14 a.m. 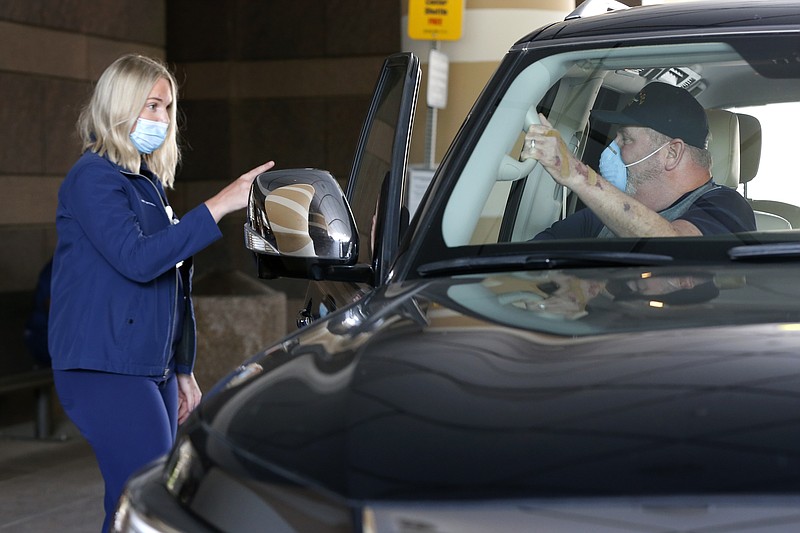 Molly Gough, a speech therapist at the Zale Hospital on the UT Southwestern Campus speaks with patient Stephen Donelson as he departs the hospital in Dallas, Friday, June 19, 2020. He had undergone an organ transplant two years earlier, and the immune-suppressing drugs that prevent rejection of his new lungs and liver meant his body couldn’t fight the coronavirus. (AP Photo/Tony Gutierrez)

Amid the chaos of the pandemic's early days, doctors who faced the first coronavirus onslaught reached across oceans and language barriers to advise colleagues trying to save lives in the dark.

With no playbook to follow and no time to wait for research, YouTube videos describing autopsy findings and X-rays swapped on Twitter and WhatsApp spontaneously filled the gap.

When Stephen Donelson arrived at the University of Texas Southwestern Medical Center in mid-March, Dr. Kristina Goff was among those who turned to what she called "the stories out of other places that were hit before."

Donelson's family hadn't left the house for two weeks after covid-19 started spreading in Texas, hoping to protect Donelson, an organ transplant recipient. Yet one night, his wife found him barely breathing, his skin turning blue, and called 911.

In the overflowing hospitals in New York or Italy, Goff thinks Donelson wouldn't even have qualified for a then-precious ventilator. But in Dallas, "we pretty much threw everything we could at him," she said.

Like doctors everywhere, Goff was at the beginning of a huge learning curve.

"It's a tsunami. Something that if you don't experience it directly, you can't understand," Italian Dr. Pier Giorgio Villani said in the first of a series of webinars organized to alert other intensive care units what to expect -- just two weeks after Italy's first hospitalized patient arrived in his ICU, and 10 days before Donelson fell ill in Texas.

The video sessions, organized by an Italian association of ICUs, GiViTI, and the nonprofit Mario Negri Institute and later posted on YouTube, constitute an oral history of Italy's outbreak, narrated by the first doctors in Europe to fight the coronavirus.

Italian friends spread the word to doctors abroad, and translations began for colleagues in Spain, France, Russia and the U.S., all bracing their own ICUs for a flood of patients.

They offered "a privileged window into the future," said Dr. Diego Casali of Cedars-Sinai Medical Center in Los Angeles, who was directed to the webinars when he sought advice from an Italian front-line friend about how to prepare.

Every tidbit about the newest baffling symptom, every trick to try, served as clues as the virus bore down on the next city, the next country. By the time Donelson arrived, Goff's hospital was adjusting ventilator care based on that early advice.

But while grateful for the global swirl of information, Goff also struggled to make sense of conflicting experiences. "You have no idea how to interpret what went right or what went wrong," she said, "or was it just the native course of the disease?"

Doctors in Italy were confused: Reports from China were suggesting a death rate of about 3% among those infected. But for the first 18 days, only dead people left the ICU at Bergamo's Pope John XXIII Hospital. While the toll eventually dropped, 30% of the hospital's initial 510 covid-19 patients died.

After decades in practice, ICU chief Dr. Luca Lorini thought he knew how to treat the dangerous kind of respiratory failure -- called ARDS, or acute respiratory distress syndrome -- first thought to be the main threat.

"Every night, I would go home and I had the doubt that I had gotten something wrong," Lorini said. "Try to imagine: I am all alone, and I can't compare it with France because the virus wasn't there, or Spain or the U.K. or America, or with anyone who is closer to me than China."

By February, China had filed only a limited number of medical journal reports on how patients were faring. Lorini's hospital tried to fill the gap by dividing patients into small groups to receive different forms of supportive care and comparing them -- not a scientific study, but some real-time information to share.

Mid-March brought a startling surprise: In a training video for U.S. cardiologists, Chinese doctors warned that the virus causes dangerous blood clots, and not just in the lungs. They urged American doctors to use blood thinners protectively in the severely ill.

"We're learning as we go," said Dr. Tiffany Osborn, a critical care physician at Washington University School of Medicine in St. Louis. "You could talk to me in two weeks, and I might be telling you something that's really different."

When Donelson arrived in the Dallas hospital, "we had very little hope for him," Goff said. He was battling against the ventilator's artificial breaths, so Goff sedated him to let the machine do all the work.

Hospital after hospital had struggled with balancing how to get enough air into oxygen-starved coronavirus patients without further damaging fragile lungs. One procedure that helped is proning -- turning patients from their backs to their stomachs in a prone position to take pressure off the lungs.

Donelson stayed on his belly about 16 hours a day early on, as his doctors watched his oxygen levels improve.

Hospitals that specialize in treating ARDS knew how to prone before covid-19 hit. For many others, it was a brand-new skill.

"We've never had to prone anyone here before the pandemic, but now it's like second nature," said Kevin Cole, a respiratory therapist at Maryland's Fort Washington Medical Center.

Even now, Goff is humbled at how difficult it remains to predict who will live and who will die. She can't explain why Donelson, who went home after a 90-day ordeal, was ultimately one of the lucky ones.

Information for this article was contributed by Nathan Ellgren of The Associated Press. 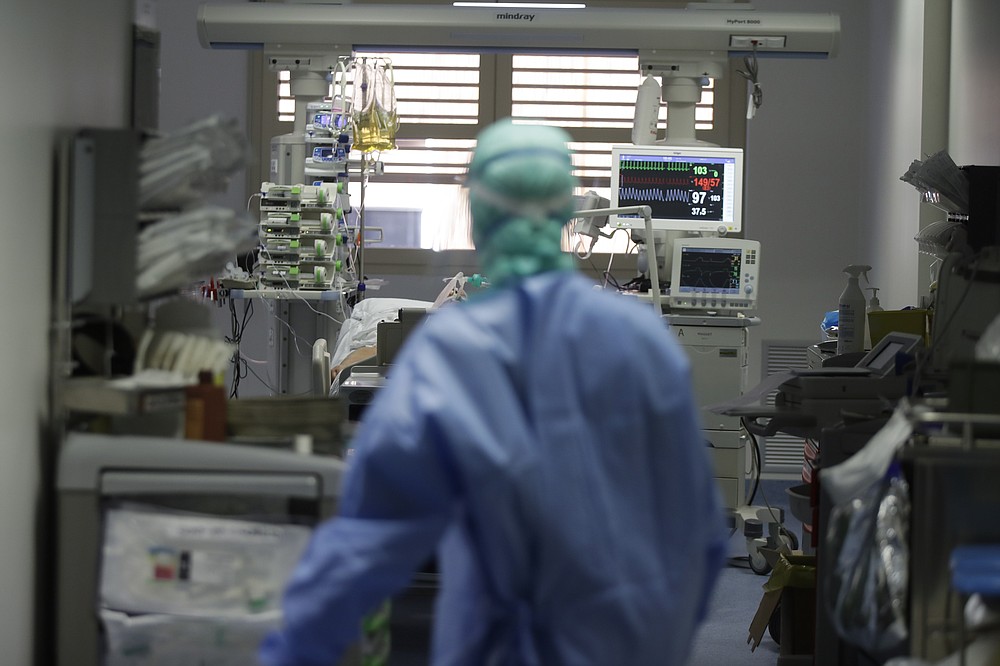 FILE - In this Monday, March 16, 2020 file photo, a doctor watches a coronavirus patient under treatment in the intensive care unit of the Brescia hospital, Italy. Amid the chaos of the pandemic’s early days, doctors who faced the first COVID-19 onslaught reached across oceans and language barriers in an unprecedented effort to advise colleagues trying to save lives. (AP Photo/Luca Bruno) 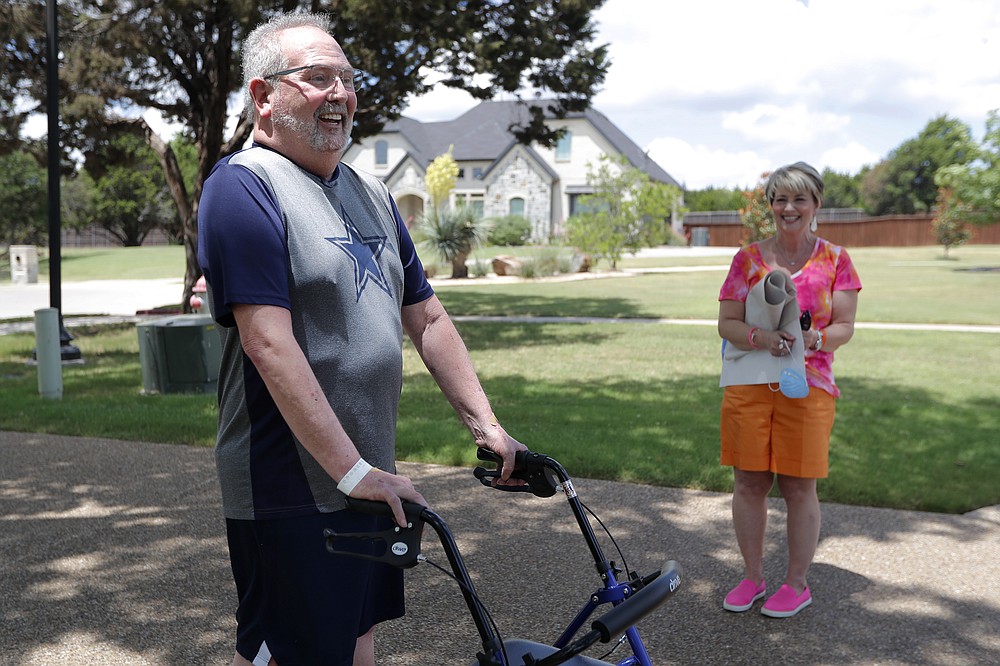 Stephen Donelson, left, smiles as he walks up his driveway to his home accompanied by his wife, Terri, in Midlothian, Texas on Friday, June 19, 2020, after his 90-day stay in the Zale Hospital on the UT Southwestern Campus. Donelson’s family hadn’t left the house in two weeks after COVID-19 started spreading in Texas, hoping to shield the organ transplant recipient. Yet one night, his wife found him barely breathing, his skin turning blue, and called 911. (AP Photo/Tony Gutierrez) 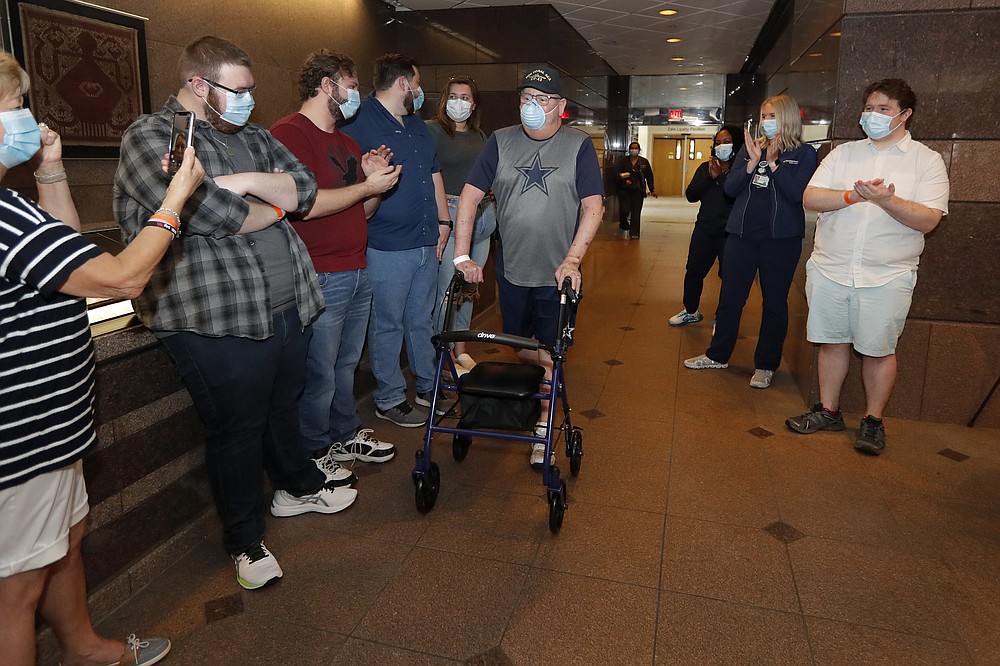 COVID-19 patient Stephen Donelson is applauded by family and health care professionals as he departs the Zale Hospital on the UT Southwestern Campus in Dallas, Friday, June 19, 2020. During his three-month hospital stay, Donelson spent 17 days on a ventilator. When it was removed, he was too weak to even sit without support and the breathing tube had taken away his ability to swallow. (AP Photo/Tony Gutierrez) 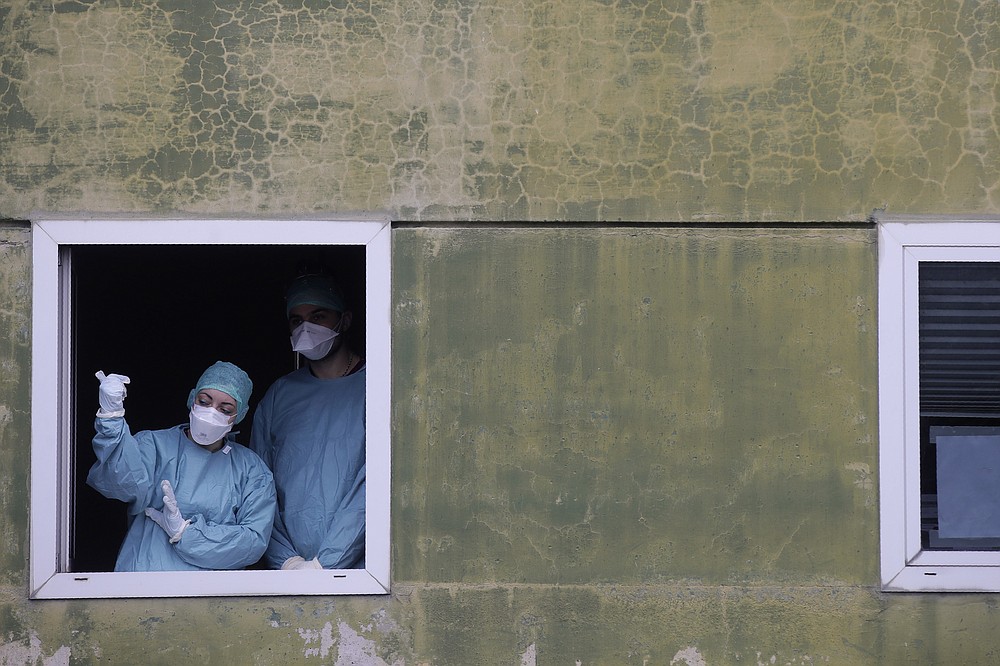 FILE - In this Thursday, March 12, 2020 file photo, medical staff in work at one of the emergency structures that were set up to ease procedures at the Brescia hospital, northern Italy. Amid the chaos of the pandemic’s early days, doctors who faced the first coronavirus onslaught reached across oceans and language barriers in an unprecedented effort to advise colleagues trying to save lives. (AP Photo/Luca Bruno) 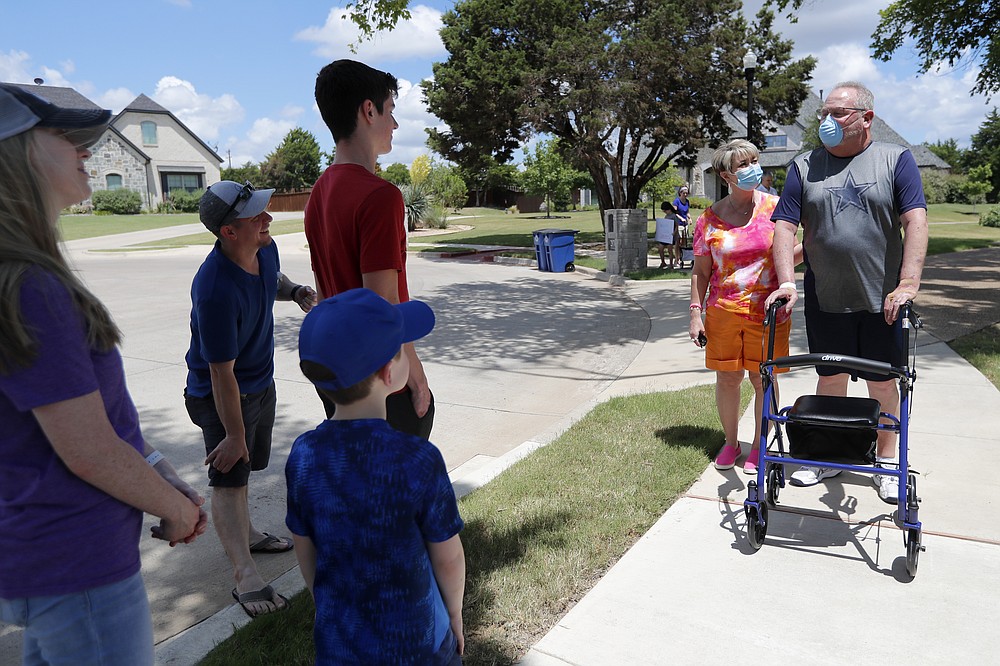 Terri Donelson and her husband, Stephen, right, are greeted by friends, family and neighbors after his arrival at his home in Midlothian, Texas on Friday, June 19, 2020. A trick doctors around the world shared with each other: Flip COVID-19 patients over from their backs to their stomach. It’s called proning and it takes pressure off the lungs, which lie closer to the back. Donelson stayed on his belly about 16 hours a day early on, as his doctors watched his oxygen levels improve. (AP Photo/Tony Gutierrez) 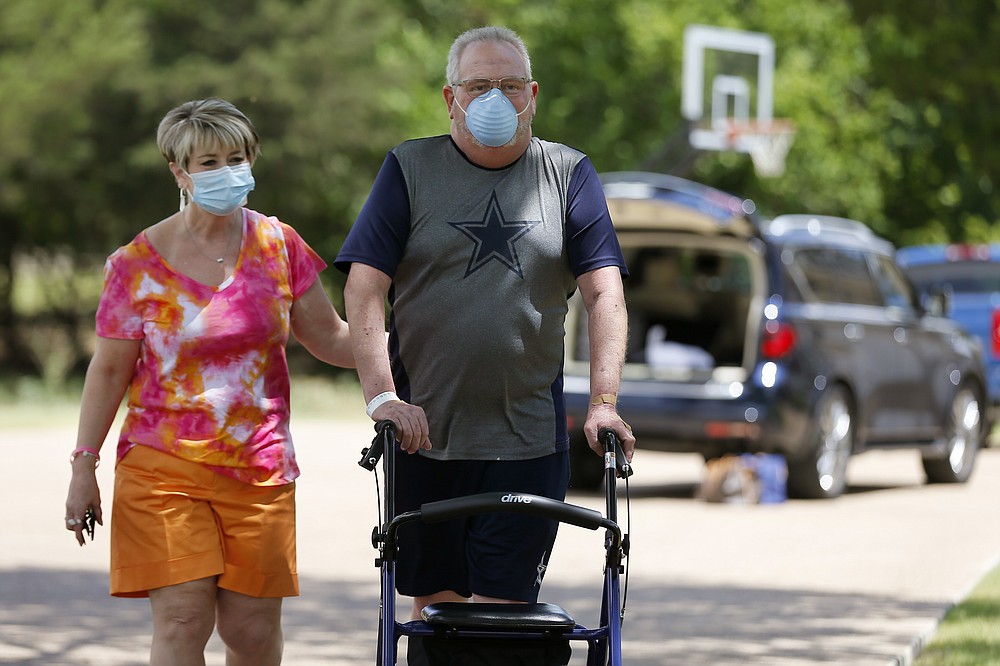 Terri Donelson, left, and her husband, Stephen, walk up their driveway to see friends and family awaiting him at his home in Midlothian, Texas on Friday, June 19, 2020, after his 90-day stay in the Zale Hospital on the UT Southwestern Campus. Donelson’s family hadn’t left the house in two weeks after COVID-19 started spreading in Texas, hoping to shield the organ transplant recipient. Yet one night, his wife found him barely breathing, his skin turning blue, and called 911. (AP Photo/Tony Gutierrez)
ADVERTISEMENT