VIRUS DIARY: The pandemic nudges him into the woods, sort of 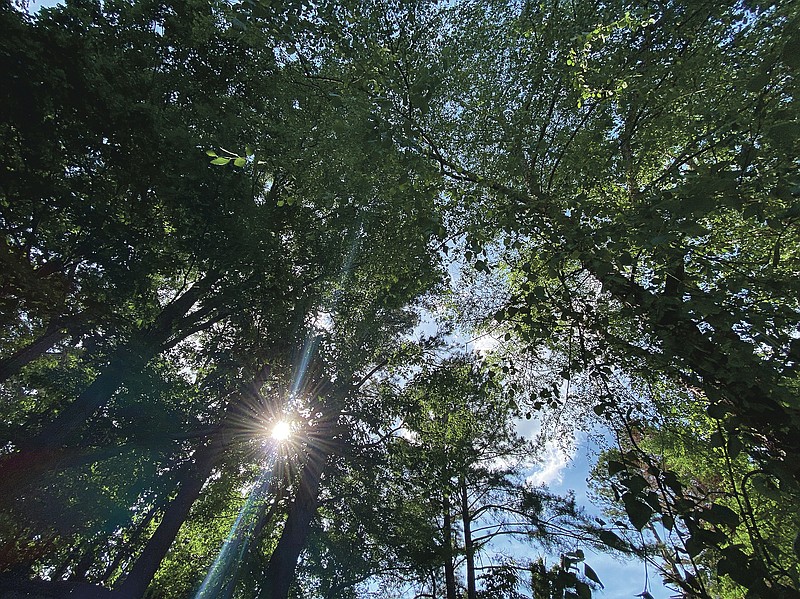 In this May 29, 2020, photo, sun shines through trees in the suburban Atlanta backyard of Associated Press journalist Alex Sanz. He went camping there and realized the adult, pandemic version of a childhood dream, even if nothing about it was how he imagined it. (AP Photo/Alex Sanz)

ATLANTA -- For someone who grew up on the sandy beaches and the urban jungle that is coastal South Florida, camping -- real camping, as I imagined it -- was the stuff you'd see in movies: friends gathered around a fire somewhere in the woods, eating marshmallows and telling ghost stories or listening for bears.

This childhood dream was never far from the imagination. Not while hiking the chaparral-covered Hollywood Hills when I called Los Angeles home, not while spending a weekend in New England when I worked in New York City. I realized, eight weeks into working from home, that if there was ever a time to go camping -- real camping -- this was it.

I searched online for tents and faced questions meant to intimidate a novice. Is a four-person tent too small for two adults, twin 9-year-old boys and a dachshund? Do I need a cabin tent or a dome tent? Do I spend hundreds of dollars on something I may only use once? What about bugs? What if it rains?

I decided on a six-person tent that's supposed to assemble in 60 seconds. It was a lot easier than trying to figure out poles and stakes. And it was on sale.

I had it all planned out. We'd make a weekend out of it. The campgrounds and national parks were closed, so we'd do this in the backyard of our suburban Atlanta home. I'd rake the oak leaves that blew in from a neighbor's yard. The boys would pick out snacks and board games.

On a recent Friday evening, I powered down the laptop after a late meeting, opened the tent box and brought it outside. It took about 15 minutes, but I did it. I pitched my first tent. This was my moment.

The boys watched, eagerly asking questions you'd expect from 9-year-olds. But after dinner, as the sun set, there were cracks in the excitement. One by one, my urban family had a change of heart. In this uncertain time that had already been full of relative isolation, I'd spend this night alone.

Blankets and pillows in hand, I stared at the spacious tent. I looked back toward the house and said good night. I locked the door, walked about 15 feet and set off on this adventure under our canopy of trees.

As I pulled up the covers and made myself comfortable on the queen-size air mattress, I realized: Real camping is nothing like the movies. The air was crisp and there was a surprising stillness to the night. I could smell the sweet fragrance of a neighbor's flowering Japanese privet. I was cold. Even under several covers, wearing a T-shirt and a pair of shorts in 58-degree air was cooler than I expected.

I was alone, but this rare moment of solitude almost fit the moment.

The moon was waning. I gazed into the clear sky and counted dozens of planets and stars. I watched the International Space Station cross below the horizon. It was a time to see, and a time to feel. And I enjoyed it, for a moment, without life's worries.

No sooner had I dozed off nature's soundtrack roused me: the soaring chorus of cardinals, mockingbirds and robins. The unrelenting sound of a hungry woodpecker. The chirps of chipmunks and squirrels.

There were no friends. There was no campfire, no marshmallows, no ghost stories or bears. But after months of pandemic stress, it was an important moment of solitude. It brought a needed peace to an otherwise chaotic spring.

It wasn't how I imagined it. But as a good friend reminded me, I finally did something I'd always wanted to do. The adult, pandemic version of a childhood dream had just come true.