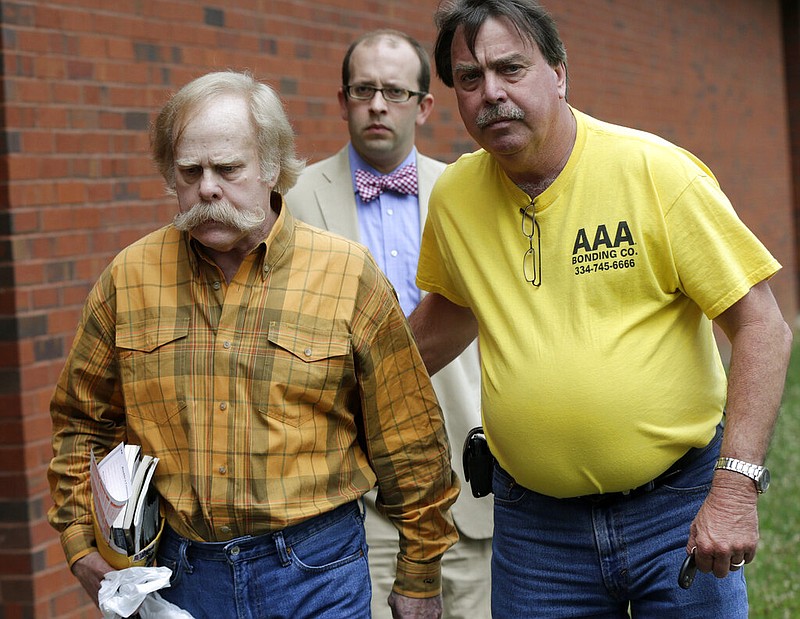 Harvey Updyke (left) leaves the Lee County, Ala., Justice Center in Opelika with his bail bondsman and his attorney in this June 10, 2013, file photo. Updyke, the University of Alabama fan convicted of poisoning Auburn University’s landmark oak trees, died Thursday, July 30, 2020, at age 71, according to his son, Bear Updyke. (AP / Dave Martin )

OPELIKA, Ala. — Harvey Updyke, the overzealous University of Alabama football fan who poisoned landmark oak trees at archrival Auburn University and went to jail after bragging about it on a radio show, has died.

No cause of death was released, but court filings showed Updyke, who lived in Louisiana, had numerous ailments including congestive heart failure and coronary disease.

Updyke pleaded guilty in 2013 to poisoning trees at Auburn’s Toomer’s Corner, where Tiger fans traditionally gather after big victories to throw rolls of toilet paper over the oaks.

Authorities learned what had happened only after Updyke, using a pseudonym, announced what he had done on a call-in sports talk show in January 2011. Updyke said he was upset after Auburn beat Alabama in 2010 and then went on to win the national championship.

Auburn University officials spent more than two years working to save the trees, but finally had to remove them in 2013.

Updyke served six months in jail for damaging an agricultural crop and was ordered to turn over $800,000 but paid only a fraction of the amount. He told a judge he couldn’t afford to pay more, and prosecutors’ attempt to get more money stalled last year because of questions over Updyke’s health.

“He was misunderstood at times, but anyone close to him understood him, knew his heart, forgave his flaws, and loved him. He made us all laugh. He genuinely cared,” she wrote.

Neither Updyke nor her husband immediately returned messages, and Lee County District Attorney Brandon Hughes, who tried to get additional restitution payments from Updyke, said he didn’t have independent confirmation of his death.