Full panel set to scrutinize decision for immediate dismissal by Compiled by Democrat-Gazette staff from wire reports | July 31, 2020 at 5:04 a.m. 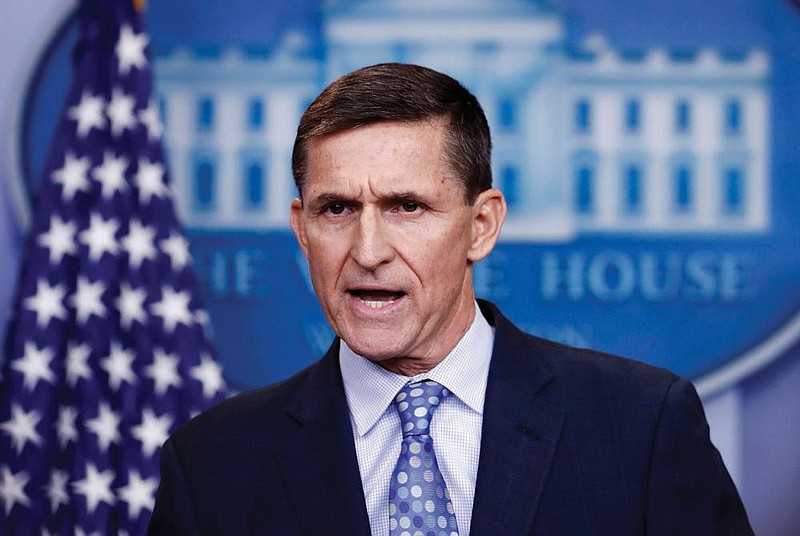 WASHINGTON -- The entire U.S. Appeals Court in Washington said Thursday that it would take up a case involving Attorney General William Barr's decision to drop the prosecution of President Donald Trump's former national security adviser Michael Flynn, erasing a split decision by a three-judge panel in June ordering an immediate end to the case.

An order from the U.S. Circuit Court of Appeals for the District of Columbia said that a majority of its members had voted to vacate a June 24 panel decision ordering the immediate dismissal of the case against Flynn and set oral arguments before the full court for Aug. 11.

Barr's intervention prompted accusations that the attorney general had ended the prosecution of a presidential favorite for illegitimate political reasons.

The trial judge overseeing the matter, Emmet Sullivan, decided to scrutinize the legitimacy of that request, appointing an outside critic who portrayed Barr's move as corrupt and urged the sentencing of Flynn, who has twice pleaded guilty to lying to FBI agents about conversations with a Russian ambassador. But before the judge could hold a hearing, Flynn's legal team persuaded two of three judges on an appeals court panel to order the judge to dismiss the charges without further review.

[Video not showing up above? Click here to watch » https://www.youtube.com/watch?v=vxv-bnIS8h8]

A chief argument against their intervention was that the situation did not qualify for the extraordinary remedy of an immediate order to the trial judge -- a so-called writ of mandamus -- because an alternative was available: Sullivan could be permitted to make his decision in the normal course, and if Flynn did not like it, he could file an appeal.

The unsigned order from the full court signaled that the majority of the judges who wanted to rehear the matter may be focused on that argument. It stated: "The parties should be prepared to address whether there are 'no other adequate means to attain the relief' desired."

Flynn, a former Army lieutenant general, had been a top aide to Trump during the 2016 campaign and was set to become his national security adviser during the transition after the election when he had several phone calls with the Russian ambassador to the United States at the time, Sergey Kislyak.

The FBI decided to question Flynn about the calls to see what he would say, and Jan. 24, 2017, as the national security adviser to the newly installed President Trump, Flynn provided to two agents a false description of his calls.

The office of Robert Mueller, the former special counsel appointed to lead the Trump-Russia investigation, eventually struck a deal with Flynn's original legal team under which he would cooperate and plead guilty to one count of making a false statement to resolve his legal liability both for that interview and for failing to register as a paid foreign agent of Turkey in 2016 and then signing forms in 2017 lying about the nature of that work.

Separately, the FBI said Thursday that errors in more than two dozen applications for surveillance warrants were not as severe as the Justice Department inspector general made them out to be.

The FBI statement appears to counter criticism from Democrats and Republicans alike that its process for conducting secret surveillance in national security investigations is riddled with significant errors that undermine the bureau's credibility.

The Justice Department watchdog has issued a series of critical reports on the topic over the last year, identifying important errors and omissions in applications the FBI submitted to wiretap a former Trump campaign adviser in the Russia investigation. In March, it said it had conducted an audit of 29 wiretap applications and found problems in all 29, including apparent errors or inadequately supported facts in 25 of them.

But the FBI said that its own review of the 29 applications found only two material errors, and neither is believed to have affected a judge's decision that there was probable cause for the surveillance.

The statement was made during an effort by the FBI to shore up the accuracy of applications submitted to the secretive Foreign Intelligence Surveillance Court, which processes requests to eavesdrop on American soil in national-security investigations.

Information for this article was contributed by Charlie Savage of The New York Times; and by Eric Tucker of The Associated Press.