Issues include troop cutback in Germany, firing of State Department watchdog by Compiled by Democrat-Gazette staff from wire reports | July 31, 2020 at 5:06 a.m. 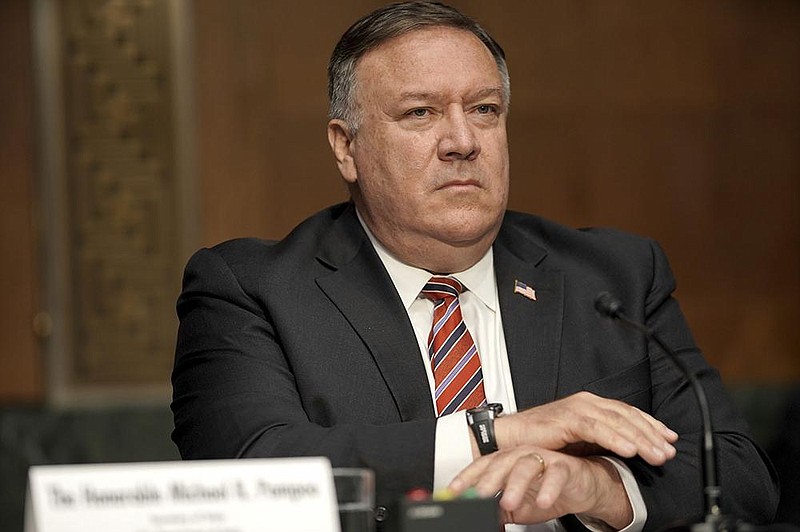 In his testimony Thursday, Secretary of State Mike Pompeo flatly rejected that the Trump administration had in any way helped Russian President Vladimir Putin. More photos at arkansasonline.com/731pompeo/. (AP/Greg Nash)

WASHINGTON -- Secretary of State Mike Pompeo clashed with Democrats on the Senate Foreign Relations Committee on Thursday in his first visit to the panel in more than a year.

Lawmakers grilled the nation's top diplomat on an array of issues, including the Trump administration's decision to withdraw 12,000 troops from Germany and Pompeo's firing of the State Department's internal watchdog, who had been investigating alleged wrongdoing by him and his wife.

The top Democrat on the committee, Sen. Robert Menendez of New Jersey, said the U.S. administration had "abetted" Russian President Vladimir Putin by withdrawing the troops from Germany and took aim at the central focus of Pompeo's tenure, Iran, noting that the country "is much closer to a nuclear bomb than when you came into office," and criticizing Pompeo's "maximum pressure campaign" for failing to stop Iran's aggressive actions in the Middle East.

Pompeo flatly rejected that the administration had helped Putin in any way, saying no U.S. administration in history has been tougher on Russia and boasting that "300 Russians who were in Syria" are "no longer on the planet," in reference to a 2018 skirmish in Syria that resulted in the United States' killing of dozens of Russian military contractors.

[Video not showing up above? Click here to watch » https://www.youtube.com/watch?v=o55R8RHmwUA]

"This administration has acted to protect our interests and our friends," Pompeo said, adding that he and others would act to counter Russian attempts to meddle in the 2020 presidential election. "We're taking seriously the threats that the Russians will engage in disinformation campaigns."

On the U.S. withdrawal in Germany, which President Donald Trump has complained has not paid its fair share for its own defense, Pompeo noted that U.S. troops would be moved to other areas in Europe, including closer to Russia's border. U.S. forces will move to Italy, Belgium and back to the United States, according to the Pentagon.

Democratic Sen. Jeanne Shaheen of New Hampshire noted that Russia was the only country that "publicly supported" the removal of troops. Pompeo responded that the U.S. troops would be "fully available" if needed, and noted the Kremlin was irritated that some troops would be moved closer to the Russian border.

Menendez asked Pompeo if he pressed Russian officials about allegations that Moscow offered bounties to the Afghan Taliban to kill U.S. and coalition soldiers there. Pompeo refused to say if he specifically brought up that allegation, but said he broadly raises U.S. concerns with his Russian counterparts regularly.

Among the Russian officials, Pompeo said he has discussed threats generally with Foreign Minister Sergey Lavrov, as has the U.S. ambassador to Russia, John Sullivan.

Pompeo declined to say whether he would recommend that Trump raise the matter with Putin but said the Russian leader understood full well the U.S. position.

Earlier this week, Trump told an Axios reporter that he did not raise the the bounty issue in his discussions with Putin because he questioned the intelligence.

Pompeo also acknowledged that he recommended that the State Department's watchdog be fired. The inspector general, Steve Linick, was looking into allegations that Pompeo and his wife, Susan, inappropriately had staff members and diplomatic security officers do personal chores for them, such as picking up takeout and other errands, and whether Pompeo improperly pushed through arms sales packages to Saudi Arabia over the objections of Congress.

Pompeo denied any knowledge of Linick's investigations, with the exception of the Saudi arms probe, but said that wasn't the motivation for his decision.

Republicans defended the Trump administration's record on foreign policy, with the exception of Utah Sen. Mitt Romney, who criticized Trump's "fawning praise" of Chinese President Xi Jinping and the troop withdrawal in Germany. Romney said he had heard "from the highest levels of the German government" that the decision was seen as an insult to an important ally.

Democratic Sen. Tim Kaine asked Pompeo about the appropriateness of Trump's suggestion on Twitter on Thursday that the presidential election in November should be delayed. Pompeo declined to say if that would be illegal or wrong, noting that the election "should happen lawfully."

Information for this article was contributed by John Hudson of The Washington Post; and by Matthew Lee of The Associated Press.