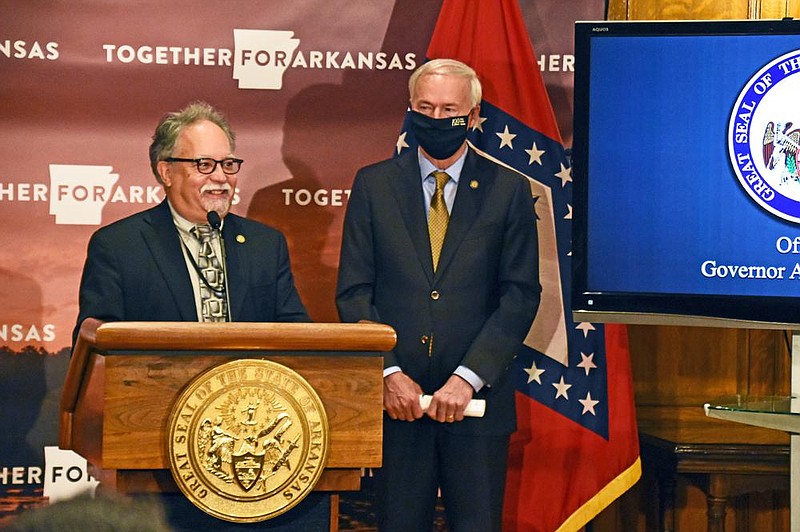 Arkansas no longer will require patients undergoing elective surgery to take coronavirus tests before their procedures, officials said Thursday, citing the need to preserve testing capacity for people more likely to have encountered the virus.

The announcement -- made at Gov. Asa Hutchinson's nearly daily news briefing on the pandemic -- came as the state was all but assured to fall several thousand tests short of the governor's 200,000 goal for July. The state reported conducting 181,456 tests as of Wednesday.

On Thursday, tests produced another 791 positive cases, Hutchinson said, raising the state's total to 41,759 since the beginning of the pandemic on March 11. Of those, 6,580 were considered active cases.

Hospitalizations from the virus fell by four Thursday, to 504. Meanwhile, the state recorded eight additional deaths over the previous 24 hours, bringing the total to 442.

Hutchinson's interim secretary of health, Jose Romero, said testing done on patients before surgery had identified positive cases less than 1% of the time, far below the average positive rates of statewide testing. Hutchinson further suggested that testing on elective-surgery patients was "clogging up the system" and taking up testing capacity.

"Based on retrospective analysis of the number of tests that were done and the number of positives that were encountered, which was a very small percentage, a decision was made to leave that decision up to the individual physician and institution," Romero said.

Arkansas has struggled to maintain its testing numbers in July, which Hutchinson has attributed to a drop in the number of tests processed by commercial labs. On Thursday, the governor encouraged Arkansans to take antigen tests at their local pharmacies, which can return results in minutes.

Antigen tests are less reliable than other diagnostic tests, known as PCR tests, which are used in the state's tracking data, Hutchinson said. But people who receive a presumptive positive result on an antigen test are referred to take additional tests that are then recorded in the state's totals.

[Video not showing up above? Click here to watch » https://www.youtube.com/watch?v=IdTMXDybMD8]

After the change in the state Department of Health's elective-surgery directives, several large hospital networks in Arkansas announced their own policies moving forward.

In a letter to the staff Thursday, University of Arkansas for Medical Sciences Chancellor Cam Patterson and Senior Vice Chancellor Steppe Mette said the UAMS hospital will continue to test patients for the safety of other patients and staff members.

"Aerosolizing procedures during surgery place operating room staff at greater risk of infection," the letter stated. "Because all of our pre-procedure patients who have tested positive were asymptomatic and there is a high level of asymptomatic cases in the community, continuing to test provides an added layer of information and protection in addition to other universal precautions."

At Baptist Health, meanwhile, a spokeswoman said the hospital network was not changing its policies at the present as it awaits a written copy of the new directive for further review.

Bo Ryall, the director of the Arkansas Hospital Association, said the change in the elective surgery directive was welcome news for hospitals, which he said were having to put off procedures at times while awaiting test results. He said he did not know how many hospitals would continue to test pre-surgery patients once the requirement is gone.

"From what we've seen with testing turnaround times in some parts of the state, this is going to be very helpful," Ryall said.

Since the pandemic began in March, there have been 1,266 nursing home and assisted-living facility residents, as well as 902 health care workers in the industry, test positive for covid-19, according to a Health Department report.

Of that number, 159 residents and one health care worker have died from the virus.

Mitchell's Nursing Home Inc. in Danville has had 74 residents test positive for covid-19 -- the highest number of positive cases of all 196 nursing homes that have had at least one covid-19 case.

The nursing home has also had 45 staff members test positive.

The nursing home's owner, Robert Mitchell, was unavailable to talk to a reporter, a staff member said.

Yell County, where Mitchell's Nursing Home is located, has had 991 cases and 14 deaths since the pandemic began.

Lake Village Rehabilitation and Care Center in Chicot County has had the second-highest number of covid-19 cases of the state's nursing homes, with 73 residents testing positive.

Seven residents have died there from the virus, and 18 health care workers have tested positive.

A call to the nursing home resulted in a staff member hanging up when asked for comment.

Lake Village Rehabilitation and Care Center, which is in far southeast Arkansas, has had 498 cases of covid-19 and five deaths.

The Waters of White Hall nursing home in Jefferson County has had 46 residents test positive and 16 die from the virus.

According to the Health Department report, there are four nursing homes that have seen double digits in deaths of residents.

Woodland Hills Healthcare and Rehabilitation in Jacksonville has had 19 out of 102 residents die from the virus.

When it comes to the number of health care workers and staff members infected with the virus in the state's nursing homes, Mitchell's in Danville led with 45 employees who have tested positive. Next-highest is The Springs of Broadway in West Memphis, which has had 44 employees test positive. Woodland Hills Healthcare and Rehabilitation in Jacksonville is the third-highest with 37 employees testing positive.

The one death of a health care worker in the state's nursing homes occurred at Dardanelle Nursing and Rehabilitation Center Inc. in Yell County.

In the state's five Human Development Centers, 130 residents and 86 health care workers have tested positive for the virus, according to the Health Department report and a report from the Department of Human Services.

The Conway Human Development Center, the largest of the five, has had 129 residents and 73 employees test positive for the virus.

The Jonesboro center has had one resident test positive, while the centers in Arkadelphia, Booneville and Warren have not had any residents test positive for the virus.

There have been no deaths in the state's Human Development Centers.

The Arkansas Center for Health Improvement began Thursday listing city-level data on the number of active cases, showing hundreds of cities that have at least one active patient.

Joe Thompson, the director of the nonprofit center, said it will publish the total number of active cases -- referring to people who have tested positive for the virus and are still considered infectious -- in more than 100 cities where at least 10 cases are considered active. The data will also show the names of 400 other cities and towns with between one and nine active cases.

"That puts us at 500 communities across the state with active covid disease in their community," Thompson said. "That is virtually every community in the state."

According to the data published on Arkansas Center for Health Improvement's website Thursday, the communities with the largest number of active cases were mostly larger or midsize cities. They were: Little Rock with 495 cases; Springdale with 421 cases; Fort Smith with 348 cases; Jonesboro with 189 cases; and Rogers with 185 cases.

Thompson said the center is working on publishing data that shows the rates of active infections relative to a community's size.

Information for this article was contributed by Alex Golden of the Northwest Arkansas Democrat-Gazette. 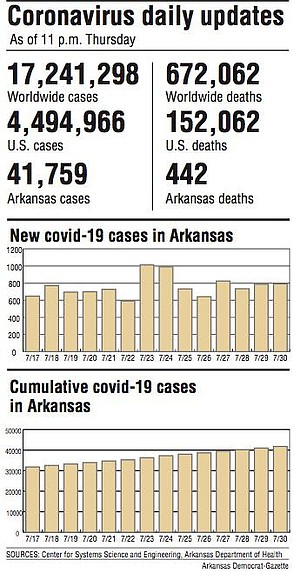