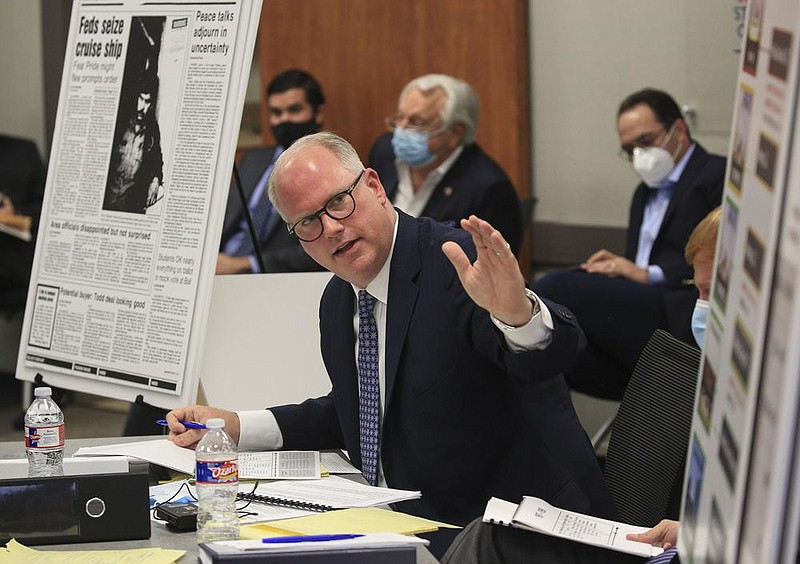 Dustin McDaniel, an attorney for Cherokee Nation Businesses, makes his case Thursday before the Arkansas Racing Commission to reverse its decision to grant a Pope County casino license to Gulfside Casino Partnership. The commission voted to deny the appeal. (Arkansas Democrat-Gazette/Staton Breidenthal)

Another chapter in a contentious process closed Thursday when a divided Arkansas Racing Commission denied the Cherokee Nation Businesses' appeal of the commission's decision to award the license for a new casino in Pope County to the Gulfside Casino Partnership of Mississippi.

Hunter said he doesn't believe Cherokee Nation Businesses proved that Gulfside made misrepresentations that were intended to deceive the commission.

Before the final vote, commissioners:

• Tossed out Lieblong's and Rice's scores of the two companies. Each commissioner had graded the applicants at a meeting in June.

• Affirmed their finding that Legends Resort and Casino is a qualified applicant.

• Heard attorneys for both applicants, plus Gulfside co-owner Terry Green, argue the merits of the Cherokees' appeal of the decision last month to award the casino license to Gulfside.

No commissioner made a motion to re-score Gulfside and the Cherokees' applications, after Lamberth noted that that was an option.

"This is the commission of my mentor, Cecil Alexander, and I pledged to him that when I got on the commission that I would uphold the highest standards and I intend to do that ... [and] uphold the standards of Alex Lieblong, the chair," said Lamberth, who served as the chairman in Lieblong's absence.

"We owe it to the citizens of this state to get this correct," he said. "It is a momentous decision."

Lamberth added: "What we do here today is going to be reviewed and acted upon by the courts, and it'll take a long time, I am sure. ... If this goes as far as I think it could, it might take a couple of years, who knows."

"It has been a long, hard-fought battle on both sides, and we are delighted that it happened the way it did," Green of Gulfside said afterward.

"We came out the victor. We are very excited about hurrying up and getting started to build a casino," he said in an interview. "I think we have got a few more court matters to go through, but I think we are well on our way now."

Green said the earliest that Gulfside could break ground depends on the courts.

Dustin McDaniel, an attorney for Cherokee Nation Businesses, said the commission "entered the full report of its consultant affirming that Legends is the superior applicant on all grading criteria, and we brought a mountain of proof that Mr. Green had made many misleading and inaccurate statements about their experience, finances and Pope County project."

He was referring to a consultant's report released weeks after the commissioners scored the applications.

"Then, Mr. Green admitted that his past financial and legal problems made him ineligible for four years to even hold a gaming license in Mississippi," McDaniel said in a written statement issued after the meeting. "Yet, the Commission declined to re-score the applications, denied our appeal by a 3-2 vote, and gave Gulfside the license in spite of everything. It will take me a while to wrap my head around that."

In a written statement, Gov. Asa Hutchison said the "Racing Commission has had to deal with one of the most difficult and controversial issues in all of state government in the last year, and I am grateful for the commissioners' hard work and fortitude in reaching the decision today.

"We are all aware that litigation is likely to follow, but the Commission ruled today and I respect the outcome," the Republican governor said. "In terms of lessons learned, we all need to be patient and let the legal and administrative process work."

McDaniel asked the commission Thursday to reverse its June 18 decision to issue the license to Gulfside.

He said Green made substantial false statements to the commission on June 18 about Green's history, experience, financial stability and the proposals of both companies.

McDaniel said Green testified that neither Green nor Gulfside co-owner Rick Carter have had to close a casino or bankrupted one. But McDaniel said Green and Carter are linked to three casino companies that filed for bankruptcy -- Carter-Green-Reed Inc. in Mississippi in 1989, Pride Cruise Lines Ltd. in Texas in 1992-98 and Gulfside Casino Inc. in Mississippi in 1997.

Casey Castleberry, an attorney for Gulfside, said Green's answer to a question about bankruptcy was not false and "to the extent in any way conflicting with the facts, it was not intentionally so and it was not intended to deceive this commission."

He said all creditors got back 100% on the dollar of their investment in the Carter-Green-Reed bankruptcy.

"There is no way to prove that we in any way attempted to deceive this commission when we sent you a letter over two months prior to the interview that described that bankruptcy," Castleberry said.

The Carter-Green-Reed bankruptcy is the only one in which either Green or Carter owned an interest in the debtor, and their share was a combined 10%, Castleberry said.

"Terry and Rick took over in 1998, [and] it has done nothing but succeed" since then, he said.

McDaniel said the Cherokees presented a market report to the commission showing that "our direct competitors in Russellville are Oaklawn 70 miles to the south [in Hot Springs] and Saracen 82 miles or whatever ... to the southeast [in Pine Bluff].

"The bulk of the market is in Central Arkansas to Russellville. It is not eastern Oklahoma," McDaniel said.

Green told the commission that "we do all our own numbers.

"You have [Interstate 40] sitting there, approximately 35,000 cars a day going by. That's a big plus for you right there," he said.

He also said Gulfside's revenue projections for the Pope County casino are consistent with a projection by the state Department of Finance and Administration.

"There is no reason to deviate from the decision you made on June 18th," Castleberry said. "I don't think there is any basis from which you can find that Terry Green or anyone on behalf of Gulfside Casino Partnership made any material misrepresentations with the intent to deceive."

On June 18, the seven commissioners selected Gulfside to build and operate a casino in Pope County based on their total score of 637 for Gulfside compared with 572 for the Cherokees.

Rice gave Gulfside a score of 100, compared with 29 for the Cherokees. The 71-point difference in his totals was larger than the difference in the commissioners' scores overall.

The other six commissioners voted June 22 to find that Rice was biased. The commission also decided to delay action on how to proceed.

Lieblong decided Monday to recuse from Thursday's meeting and withdraw his scores, saying in a letter that he wanted to "avoid any appearance of impropriety and remove any doubts as to the integrity of either myself or this process."

On June 27, Gulfside attorney Lucas Rowan questioned whether a text exchange between Lieblong and McDaniel after the June 22 meeting represented possible collusion. But Scott Hardin, a spokesman for the state Department of Finance and Administration, speaking for Lieblong at that time, rejected the suggestion of collusion.

Lieblong had the second-largest difference among his scores on June 18. He gave the Cherokees a score of 95, compared to 73 for Gulfside.

With Lieblong's and Rice's scores no longer considered, the final scores were 464 for Gulfside and 448 for the Cherokees, Hardin said Thursday.

The commissioners voted to accept its consultant's report without discussing it.

"We should have an opportunity to have an open discussion about the conclusions reached," he said. "Because of conflicting legal advice, commissioners were not given the study until July 21st [and] have strictly enforced Freedom of Information rules.

Gulfside proposed a $254 million casino and resort with 1,900 slot machines, 90 table games and 500 hotel rooms near Russellville north of I-40, with additional investment and more hotel rooms within five years.

The Cherokees proposed a $225 million casino and resort with 1,100 slot machines, 32 table games and 200 hotel rooms, also north of I-40 near Russellville.

Gulfside and the Cherokees were the last two Pope County casino license applicants standing after all five original applications -- including them -- were rejected by the Racing Commission in the first application period last year.

All five were rejected because none of them met the commission's rule then in place requiring endorsements from local elected officials serving at the time of the application's filing.

Endorsements of local elected officials are required for new casinos under state constitutional Amendment 100. Amendment 100 authorized the expansion of gambling operations at racetracks in Hot Springs and West Memphis into full-fledged casinos, as well as new casinos in Jefferson and Pope counties.

However, the amendment doesn't specify that endorsements must come from current officials.

Gulfside sued the Racing Commission because its application contained endorsements from local elected officials who had left office in December 2018. Earlier this year, Pulaski County Circuit Judge Tim Fox ruled unconstitutional the commission's rule and a state law with the same requirement.

The Cherokees resubmitted their application after being endorsed by the Pope County Quorum Court in August 2019. 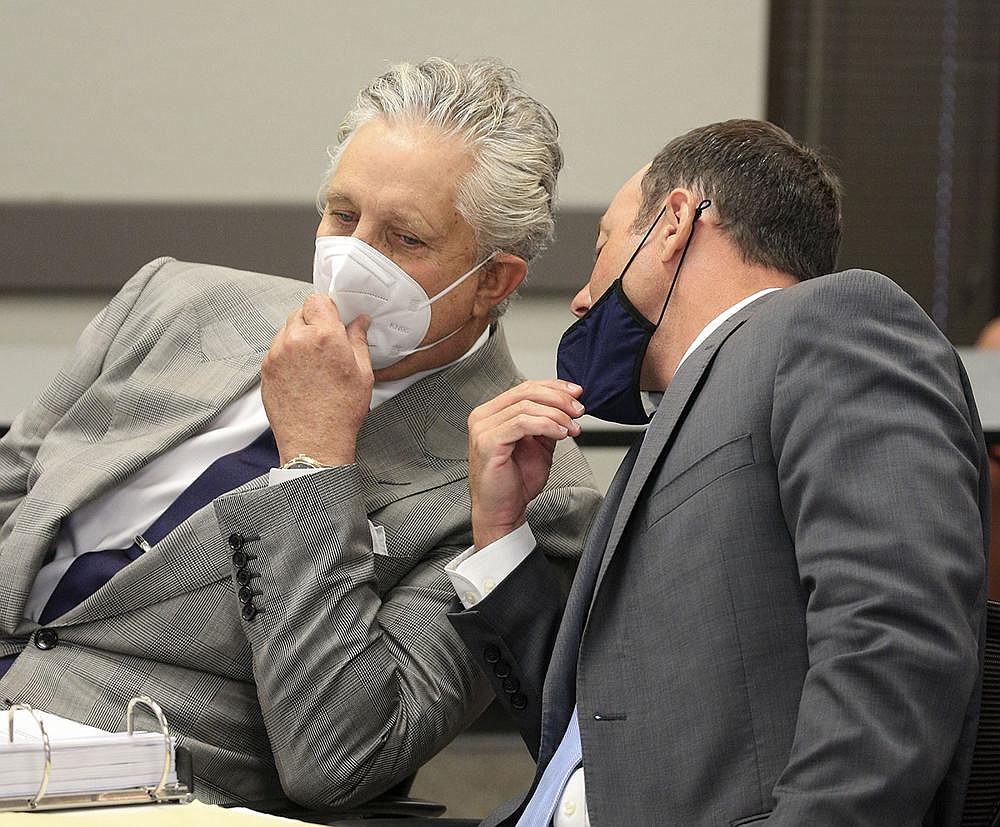 Terry Green (left), Gulfside Casino Partnership co-owner, confers with his attorney, Casey Castleberry, during the Racing Commission meeting Thursday in Little Rock. “It has been a long, hard-fought battle on both sides, and we are delighted that it happened the way it did,” Green said after the commission upheld the decision to grant a casino license to Gulfside. (Arkansas Democrat-Gazette/Staton Breidenthal)
ADVERTISEMENT