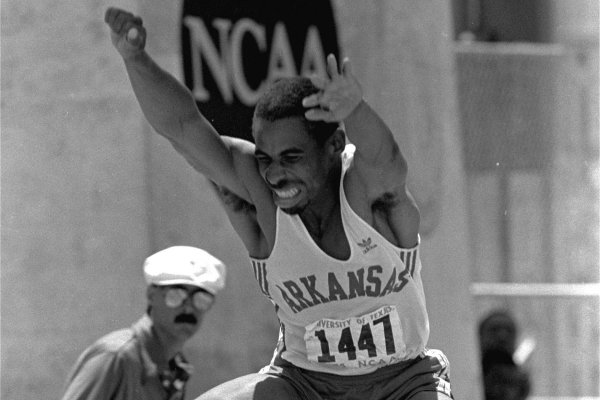 Mike Conley of the University of Arkansas goes through the air in the mens triple jump finals at the NCAA Outdoor Track and Field Championships at Austin, Texas Saturday, June 1, 1985. Conley made a jump of 57 feet 6 1/2 inches to win the event. It was the number 3 jump of all-time in the United States and a personal best for Conley. (AP Photo/Bill Belknap)

FAYETTEVILLE -- Mike Conley lost 12 pounds over four days while competing at the 1985 NCAA Outdoor Track and Field Championships in Austin, Texas, but the senior helped the University of Arkansas gain its first national triple crown.

With Conley winning the long and triple jumps, taking second in the 200 meters and running a leg on the sixth-place 400-meter relay to cap his collegiate career, the Razorbacks won their first NCAA outdoor title with 61 points. Washington State was second with 46.

The victory at Memorial Stadium -- home of the Texas Longhorns' football team -- also gave the Razorbacks a sweep of national titles in cross country and indoor and outdoor track during the 1984-85 school year.

"Oh, man, don't say that," Conley said with a laugh recently when reminded of the title's anniversary. "It's hard to believe it was that long ago."

Conley lives in Fayetteville and is the chairman of USA Track and Field's high performance committee. He also is a sports agent and represents his son, long-time NBA player Mike Conley Jr. He won an Olympic gold medal in the triple jump in 1992 and a silver medal in 1984.

"The celebration when we won the NCAA outdoor meet -- when we got the trophy at the end -- is what stands out the most," Conley said looking back on 1985. "I remember that like it was yesterday.

"Between the athletes and coaches and some of our fans, it seemed like we had 50 people out there on the infield running around and celebrating. Grown men acting like kids. I'll never forget that."

Conley accounted for 28 3/4 points at the 1985 NCAA outdoor meet -- 10 each for the long and triple jumps, 8 for the 200 and 3/4 of a point divided among the 400-relay members. Those points would have put Conley in fifth place in the final team standings.

"Mike Conley put on a show that week," Bill Jasinski, who took third in the high jump for the Razorbacks by clearing 7 feet, 6 inches, said recently. "He was a one-man wrecking crew."

Conley was a nine-time NCAA champion and 17-time All-American for the Arkansas. He also won 11 Southwest Conference titles.

"You learned to expect a lot of scoring from Mike," Jasinski said. "He'd do that year in and year out at the Southwest Conference meet, and he won a lot at the NCAA meets as well.

"But when you get to the national level and do what he did in '85 -- scoring in four events -- it's really incredible. When it came to winning, Mike Conley just wanted it more than everybody else. Nothing was going to stop him."

Arkansas was favored to win the NCAA outdoor title in 1985 and had 14 athletes qualified in 16 events, but was without injured senior All-American sprinter Wallace Spearmon Sr., who pulled a hamstring anchoring the 400 relay to victory in the SWC meet.

Then Arkansas had some struggles on the opening day of the four-day meet when six Razorbacks failed to advance to finals. The Austin American-Statesmen newspaper had a headline referring to the "Stumbling Hogs."

McDonnell called a team meeting in case any Razorbacks were having doubts.

"I don't know where all those stumbling hogs were," McDonnell said later that day at the stadium. "They must have been out on some farm.

"It's a four-day meet and we had some guys just barely miss making the finals. I want to make sure our guys didn't let that affect us adversely. The people we're counting on for points are still in the meet."

Along with the points Conley piled up and six from Jasinski in the high jump, also scoring for the Razorbacks were Roddie Haley (first in the 400), Paul Donovan (third in the 1,500), Marty Kobza (fourth in the shot put) and John Register (sixth in the long jump). Scoring on the 400 relay along with Conley and Haley were Fred Cleary and Mike Davis.

The Razorbacks were so happy after the meet that they threw McDonnell in the steeplechase water pit.

McDonnell didn't mind getting soaked with Arkansas becoming the second college -- along with Texas-El Paso -- to win an NCAA triple crown.

"You can work your whole lifetime as a coach to win three national championships," McDonnell said with water dripping off his clothes. "To win three in the same school year is just phenomenal."

McDonnell admitted after the meet that he had a little bit of "a sinking feeling" after the first day.

"But we never had given in before and we weren't about to do it now," he said. "We came back. That's our trademark."

"Roddie had an unusual approach to running the 400," said Jasinski, who lives in Springdale and is a software engineer for Cobb-Vantress, a poultry research company. "Most guys will take off and get a good start, then they'll ease into the race a little bit, because you're going a full lap.

"But Roddie didn't run it like that. He'd take off as fast as he could possibly could, and he'd run until he couldn't run anymore. He basically said, 'Catch me,' and nobody could.

"He blew the field away at the NCAA meet. Nobody could reel him back in at the end of the race. It was pretty amazing."

Conley said it helped that Haley was used to winning at Memorial Stadium at the Texas Relays and Texas state high school championships.

"Roddie had performed so well in Austin before that he was very comfortable running there for us," Conley said. "He was right at home. As a freshman he was just so loose and confident."

The long and triple jumps had prelims at the NCAA meet in 1985, so on Wednesday of that week Conley competed in the long jump, 200 and 400 relay and advanced in all three events. On Thursday, he advanced in the triple jump.

Saturday, Conley capped his ironman performance by winning the triple jump in a wind-aided 58-1 3/4.

Conley said recently that from an individual standpoint, winning the triple jump brought him the most satisfaction because he was exhausted and needed to come from behind for the victory.

After Conley held the lead through three attempts by going 54-10 on his first jump, Tennessee's John Tillman went 55-7 1/4 to move into first place.

"That's the most tired you'll ever see Mike Conley," Arkansas field events coach Ted King said after the triple jump. "And what happened is that when Tillman took the lead, he triggered the adrenaline Mike needed to overcome his fatigue."

Conley said after the victory that Tillman gave him a wake-up call.

"That slapped me in the face," Conley said. "It got me back to reality."

Jasinski's 7-6 was a personal-best and would have been a winning mark at 61 of the previous 64 NCAA outdoor meets going back to 1921.

But in 1985 Jasinski had to settle for third behind Lamar's Thomas Ericksson and Alabama's Thomas McCants, who each cleared 7-7 to equal Dwight Stone's collegiate record. Ericksson won based on fewer misses.

"It was kind of bittersweet to jump my highest ever and get third," Jasinski said. "But the important thing is we won the team title.

"The celebration was so awesome. I always tell people there's nothing better than calling the Hogs from the 50-yard line in Texas' stadium."

Conley somehow found the energy to celebrate after his weight dropped from 177 pounds to 165 while he competed in the brutal Texas heat all week. Adding to the fatigue factor was the that the long and triple jumps were held during the afternoon when temperatures reached 105 degrees.

"It was 125 degrees on the turf," Conley said. "Doing four events over four days in that heat -- a lot of jumps and four races -- it was the toughest workload I've ever had. I was totally worn out after the triple jump that last day.

"But then when the meet's over and you know your team won and they bring the trophy out, you forget about how you're feeling and get a burst of energy."

McDonnell, who retired after the 2008 NCAA outdoor meet, finished his career with 40 national championships -- 37 after the 1985 victory outdoors.

"The fact that we showed we could win the title outdoors in '85 took Arkansas to another level," Conley said. "We got the monkey off our back, and that's all John needed.

"After that, everyone at Arkansas believed, and then John just took it from there."