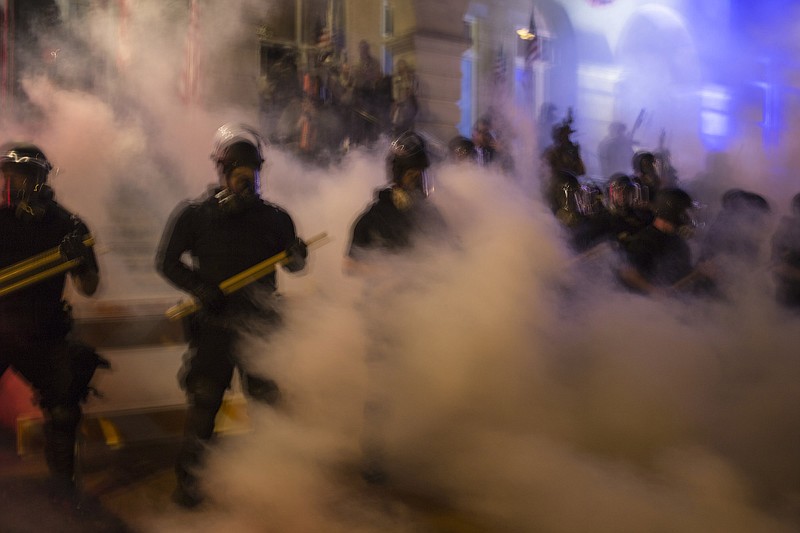 The firing began after 9 p.m. Monday, according to posts on the city of Bentonville Facebook page.

At a little after 9 p.m. a post read, "Crowd size has seemed to decrease. Smaller groups have broken away. One medical call near the statue. Fireworks currently being deployed in the area."

Updates from there noted protesters had damaged two police cars near the square, and officers had requested additional officers.

The sheriff's office issued warnings for the crowd to disperse, according to the Facebook posts. The crowd refused to disperse and tear gas was deployed. A post at 9:25 p.m. noted the crowd is was still refusing to leave.

Tear gas was fired several times into the crowd as sheriff's office deputies and Bentonville police stood in a line near the front of the courthouse. Some in the crowd pick up the tear gas canisters and threw them back at the officers.

Benton County sheriff's office officials estimated the crowd at about 1,500 people at its peak.

Protests, sometimes violent, erupted across the nation in the wake of the death of George Floyd, a 46-year-old black man who died May 25 after a white Minneapolis police officer knelt on his neck for several minutes after he was detained. Former officer Derek Chauvin was arrested in connection with third-degree murder and second-degree manslaughter. Three other officers were fired in connection with the incident.