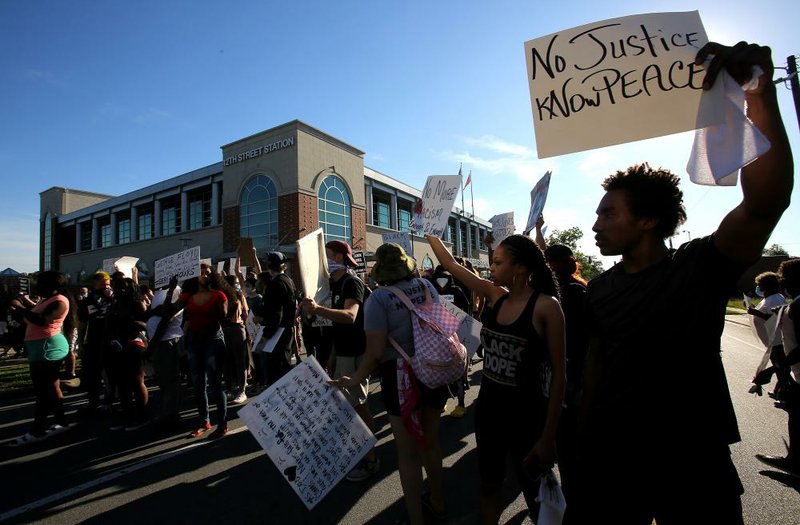 A day of peaceful protests Sunday turned chaotic just after midnight when police used tear gas to disperse demonstrators at the state Capitol.

Around midnight, hours after dozens of protesters had convened at the state Capitol, police in riot gear deployed gas and noise-making devices to disperse the crowd. At 11:56 p.m., the Little Rock Police Department tweeted, "There has been an ongoing peaceful protest at the Capitol, However, some protesters have started causing damage to property. Please avoid this area."

The rounds of chemical agents and flash bangs started soon after. A couple of rounds of fireworks went off low to the ground, too, apparently set off by protesters. Demonstrators remained in the Capitol complex for a short time, but most left as the volume of smoke grew.

Peaceful protests were held earlier Sunday at a police station and at Little Rock City Hall.

Also earlier Sunday, Little Rock officials expressed gratitude that demonstrators in the city protesting police violence after the killing of George Floyd were largely peaceful Saturday, with the mayor and police chief blaming spasms of violence in downtown Little Rock on unknown outsiders.

On Saturday, hundreds of people rallied near the Arkansas Capitol, part of a wave of demonstrations that have rocked cities across the U.S. in the wake of Floyd's death at the hands of a white Minneapolis police officer who pressed his knee into the unarmed black man's neck until he became unresponsive.

Twice on Saturday, demonstrators made their way into lanes of Interstate 630, blocking traffic around sunset and then again later in the evening, when police forced them back toward the Capitol using tear gas.

Windows were shattered across the street from the Capitol complex when the demonstration turned unruly around 10:30 p.m. Demonstrators occasionally sent hand-held fireworks shooting in the direction of the police officers.

[Video not showing up above? Click here to watch » https://www.youtube.com/watch?v=mtCVEZN4jrs]

Arkansas State Police outfitted with riot shields fired tear gas and pepper balls into the crowd amassed at the southeast part of the complex, causing moments of chaos when the crowd would turn and run from the stinging smoke. Protesters finally dispersed around 11:15 p.m.

No arrests were made at the Capitol in relation to property damage, according to Police Chief Keith Humphrey.

During a news conference Sunday morning, Scott said he was thankful the demonstrations on Saturday did not result in serious injuries or major damage.

At the news conference inside City Hall, Scott and Humphrey attributed the scattered acts of violence over the evening to people who do not live in the city, although they did not elaborate on who those individuals were and why they might have shown up to sow discord.

As far as any individuals were involved in the destruction of property, "I believe from my heart that those individuals did not live here in the city of Little Rock," Humphrey said.

The mayor said that "many were able to go home unscathed." He added, "For that, we are grateful."

Humphrey said items were thrown at officers and an attempt was made to pull shields from officers guarding the Capitol. While Humphrey said nonlethal tear gas and pepper balls were deployed, Scott made a point to say that it was not the Little Rock Police Department that deployed tear gas, drawing a contrast with Arkansas State Police.

Despite the chaotic moments, Humphrey was largely complimentary of the demonstrators. When protesters gained access to I-630, Humphrey said they continued to walk and exited the freeway to continue back to the Capitol.

"That's unlike some of the things that we've seen through the nation, which lets me know that our citizens understand what a peaceful protest is all about," Humphrey said.

[Video not showing up above? Click here to watch » https://www.youtube.com/watch?v=sVTah9FQdXU]

There was at least one injured Little Rock police officer, who was hurt when she was hit by a flying object and "overcome by one of the chemical agents that was dispersed," Humphrey said. The officer received medical attention and was transported to a local hospital. She was "doing OK," Humphrey said on Sunday.

Scott said he was proud of Little Rock residents "that walked the streets, and even walked the interstates, in a peaceful manner, and that were protected by the men and women of the Little Rock Police Department, acknowledging that they were exhibiting their First Amendment rights, based on peace."

The city's first elected black mayor, Scott said Little Rock and the nation are "experiencing hurt, heartache and pain" related not just to the killing of Floyd in Minneapolis, but to the pain of black men and women who have died "this year, last year and many years ago."

"And as they are experiencing this pain, it is only human that pain is expressed," Scott said. "But I am grateful that the pain was expressed in a peaceful manner and we had the men and women of the Little Rock Police Department that helped maintain peace and protection."

Little Rock has so far avoided the sort of looting, fires and destruction of commercial properties other cities witnessed last week during the mounting civil unrest over Floyd's death. However, two suspects were arrested early Sunday morning in the burglary of a Target store at 420 S. University Ave., according to Little Rock police, who responded to the scene shortly before 1:30 a.m.

Michael Fuller, 21, of Little Rock, and Keenan Maxwell, 19, of North Little Rock were arrested and transported to the Pulaski County jail. Police said Fuller fled from police after officers responded to an alarm company notifying them that a vehicle had crashed into the entrance of the Target, shattering the glass.

Fuller and Maxwell face charges of breaking or entering, commercial burglary, criminal mischief and criminal attempt. Fuller also faces drug and weapons charges after police found a handgun and marijuana in his possession, according to a police report.

Little Rock Fire Department Chief Delphone Hubbard told reporters on Sunday that three fires that occurred over the weekend were being investigated.

Two fires about a mile apart were reported Saturday night, one at the Lewis Street Church of Christ, located at 2716 Lewis St., and another at O'Reilly Auto Parts, located at 5322 Asher Ave. Capt. Doug Coffman, a Little Rock Fire Department spokesman, said it was too early for the fire marshal's office to say whether the fires were connected to the protest activities.

Demonstrators returned to the street to protest again on Sunday. Dozens showed up at the 12th Street Little Rock Police Station bearing signs and chanting, "I can't breathe."

Jacqueline Johnson, 56, said in an interview outside the police station that they were there not to hurt anybody, but to make a statement. "We just want to be treated fairly," she said. "Bottom line."

Johnson, a Little Rock resident, also attended the demonstration at the Capitol the day before. "I am just sick and tired of being sick and tired," she said. "I mean, we should have some justice."

Benjamin Casto, 27, said his faith led him to attend the protest outside the police station. "I can only speak for myself, but I'm a Christ follower, and so I feel like it's our job to call out injustice," Casto said.

A legal investigator from Little Rock, Casto said he attends Refuge church in North Little Rock. "I don't feel like there's a lot of churches out here right now, and I feel like this is a really golden opportunity for churches in the South to step up and bring healing to a broken society," he said.

Demonstrators marched in a circle on the block around the substation. As they did, they occasionally approached the uniformed Little Rock police officers who were standing in the road next to their vehicles, blocking traffic. Stephen Henry was one of the only police officers to respond in detail to the demonstrators' questions about race and policing.

"Real quick, I can speak for the majority of the country's police officers," Henry said over the din of the crowd. "We are just as pissed off as y'all are about what happened, because they make us look bad."

Demonstrators later moved from the substation to Little Rock City Hall, where some held signs on the street corner and looked for approving honks from cars passing on Broadway.

Nevertheless, Hamilton admitted that he was "kind of disappointed in the turnout."

"Anybody that's human, anybody that this made feel uncomfortable should be out here," said Hamilton, a 42-year-old truck driver who lives in southwest Little Rock.

A protest spanning multiple blocks of Rogers Avenue in Fort Smith also took place beginning at about 12:30 p.m. Sunday. Under the name "Black Lives Matter Protest: A Demonstration for George Floyd," hundreds of local residents lined up both sides of this major city street, chanting and waving signs carrying such messages as "Black Lives Matter," "No Justice No Peace," "White Silence Equals White Consent," and "I Can't Breathe."

Their shouts, which more than once included someone exclaiming, "Say his name!" followed by many people responding with "George Floyd!", were often accompanied by the sound of passing cars beeping their horns in approval.

The protest was organized by two 19-year-old University of Central Arkansas students from Van Buren: Layla Holloway and Emma Davis. Holloway, who also does child care work, said this was accomplished through Facebook, Instagram and Snapchat.

Holloway said she believed there were 417 protesters in attendance at one point during the day. She wanted this protest specifically to reach those who support the "All Lives Matter" movement.

Davis said she wanted to reach black Americans to show that they were heard, seen, loved, supported, and that their lives matter, in addition to the other people of color affected by racism.

"And we also wanted to have a lot of the white people show their support, and also that this is the time for change," Davis said. "A lot of the older generation likes to say to my younger generation that, 'Be the change you want to see,' and we're here to make that change. And I hope that these people, black, white, Hispanic, Asian, anyone, Native American, that they see that we're going to have this conversation, and that black lives matter."

Information for this article was contributed by Thomas Saccente and Thomas Metthe of the Arkansas Democrat-Gazette.