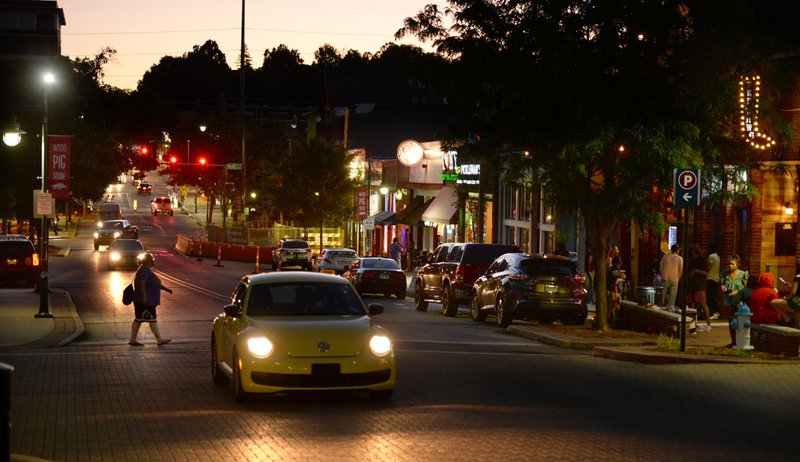 A pedestrian crosses Dickson Street Friday, May 29, 2020, as traffic passes along the street in Fayetteville. (NWA Democrat-Gazette/Andy Shupe)

FAYETTEVILLE -- The City Council at tonight's meeting will take up a pair of proposals to establish an entertainment district downtown.

The district, as defined by state law enacted last year, would allow for open public consumption of alcohol within a set boundary. The law is written broadly, allowing cities to come up with regulations that best suit them.

For more information and to provide feedback, go to the city’s outdoor refreshment area webpage:

City Council members will meet online via Zoom. To view the meeting live, go to the city’s YouTube page at youtube.com/cityoffayettevillear. 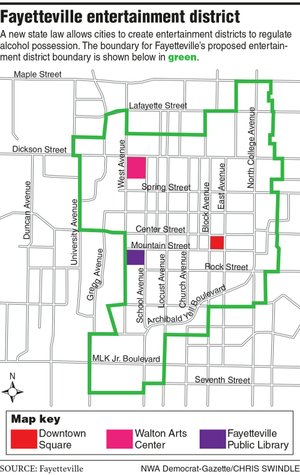 The original proposal made its way to the council for the first time in August. It was tabled indefinitely in October, and since then, Economic Vitality Director Devin Howland has been meeting with business owners, members of the Dickson Street Merchants Association and stakeholders such as the Walton Arts Center, TheatreSquared and the Fayetteville Public Library.

"The last thing we want is to do one of these districts and have something we didn't consider jeopardize a liquor license," Howland said. "A $500 fine could be the straw that breaks the camel's back for one of these businesses."

The original proposal basically drew a line around all of downtown and made it so people could get drinks at businesses and bring them outside during events. The boundary roughly covered Lafayette Street south to around Martin Luther King Jr. Boulevard and University Avenue east past College Avenue. Outdoor drinking was tied to events, unless a business applied to have a sidewalk cafe.

The city already has a sidewalk cafe ordinance, but state law requires a fence around one. The requirement is waived if the business lies within an entertainment district.

The map and sidewalk cafe parts of the proposal remain unchanged. There's also a plan to allow events to close a street and let attendees get drinks on the go from bars, rather than a beer garden.

An aspect of the proposal the council will see for the first time seeks to provide relief to bars and restaurants with limited occupancy because of the pandemic.

The proposal would allow the city to define a smaller area within the district for open consumption not tied to an event and without closing the street. The idea is someone walking around downtown could pop in somewhere, grab a drink in a compostable cup and keep walking around or sit on a bench in the defined area, Howland said. The move could help businesses serve a few more customers than they otherwise would with limited occupancy, he said.

Gov. Asa Hutchinson allowed bars to open May 26 but limited occupancy to no more than one-third the capacity as set by the fire marshal.

Implementing the sidewalk cafe and event portions of the proposal could be done as soon as it becomes an enforceable ordinance, which is 31 days after council approval, Howland said. The program allowing open consumption within a more narrowly defined area would take some work, he said.

Signs would have to be posted to clearly communicate the defined area. The city would order the branded, compostable cups people would use and distribute them to the bars.

City officials also would have to decide what type of identifier, whether it's a wristband or a stamp or anything else, to order for the bars to use. Also, there would need to be more receptacles downtown so the compostable cups could be collected and recycled, Howland said.

Businesses within the boundary would need to sign up to participate in the open consumption program. The City Council also would have to approve the boundary and allowed times.

Business owners who helped craft the proposal initially asked for the program to be implemented on slower days, Sunday through Wednesday. It may make more sense to allow it every day because of the expected slower amount of business related to the pandemic, the council's Transportation Committee recommended when reviewing the proposal this month.

The open consumption program would sunset on Jan. 30, allowing the council a chance to assess its options. It could renew the program as is, make any number of changes or do away with it altogether, Howland said. The entire proposal has time set aside for public meetings and workshop sessions to evaluate any of its pieces, creating a phased-in approach, he said.

Another possibility would be to allow businesses to replace on-street parking spaces in front of their doors with parklets, or picnic-type areas with tables and chairs and some type of small barrier such as plants or a fence on the street. Nearby businesses would have to agree so the parklets wouldn't take up parking space for their curbside services, Howland said. The city would approve an application for a parklet. The idea is to make use of a space that might not otherwise have a car using it, he said.

In the first phase of the plan through December, applications for parklets and sidewalk cafes would open. Legacy events, meaning events that have happened at least three times in the past five years, could apply to let people drink outside. The open consumption program would also start.

From December to February, the open consumption program would sunset, with meetings and workshops held and any changes considered by the City Council.

After February, in the third and final phase, any event could apply to let people drink outside, and the whole program would continue to be monitored.

J.D. Hudman sat at Buster's on Dickson Street on Thursday, looking out the window and having some beers and a pizza he picked up from Tony's nearby. He said he was glad to be able to support the only bar he ever frequents, which opened Tuesday.

The Piano Bar on Dickson also opened Tuesday and had its first night of music the following evening. Co-owner Aaron Schauer said he could feel people releasing a pent-up desire to get out. The bar has limited its capacity to 50 people inside.

"On any given weekday night, excluding Thursdays, we wouldn't necessarily hit the capacity we're limited to now. That's on average," he said. "The past three nights we have come close to having to move to one in and one out."

That kind of business won't be enough for the bar to dig itself out of the hole being shut down for two months created, but it's a welcome sign, Schauer said. People having the ability to grab a drink on the move or sit out on a sidewalk cafe also could help, he said.

"We'll roll with it if it happens, and try it out," Schauer said. "It's voluntary, so if we don't want to participate, we don't have to."

Matt Smith, bartender at the Green Room near West Avenue and Watson Street, said he's long supported the idea of people being able to take their drinks outside. Social distancing and behavior will have to be monitored, but Smith expressed confidence the city's police could handle the workload.

"It might take a little more presence," he said.

Normally, four officers are assigned to patrol downtown. Police Chief Mike Reynolds pulled two of them to watch the trails once the pandemic hit because more people were congregating there than on Dickson Street, he said.

For now, Reynolds plans to keep two officers assigned to downtown. Police in the city are enforcing social distancing directives with an educational, rather than confrontational, approach, he said.

However, if a bar repeatedly lets in more patrons than the state's directive allows, the owners could get a ticket, he said. The same goes for patrons who break the rules of the outdoor refreshment area ordinance if it passes.

People who buy a drink on the move wouldn't be able to give them to someone else, even if they're at least 21 years old. They would have to stay within the designated boundary. Already established state laws on underage drinking and disorderly conduct would continue to apply within the outdoor refreshment area.

People have the responsibility to behave accordingly, but it's up to police to enforce the laws. That means more responsibility for the city's police, Reynolds said. If the outdoor refreshment area becomes a reality, more officers could be assigned, he said.

"That's the beauty of the phasing-in plan that has been outlined to the City Council," Reynolds said. "If they approve that, that certainly allows us to take a slow approach to evaluate and monitor any problems."