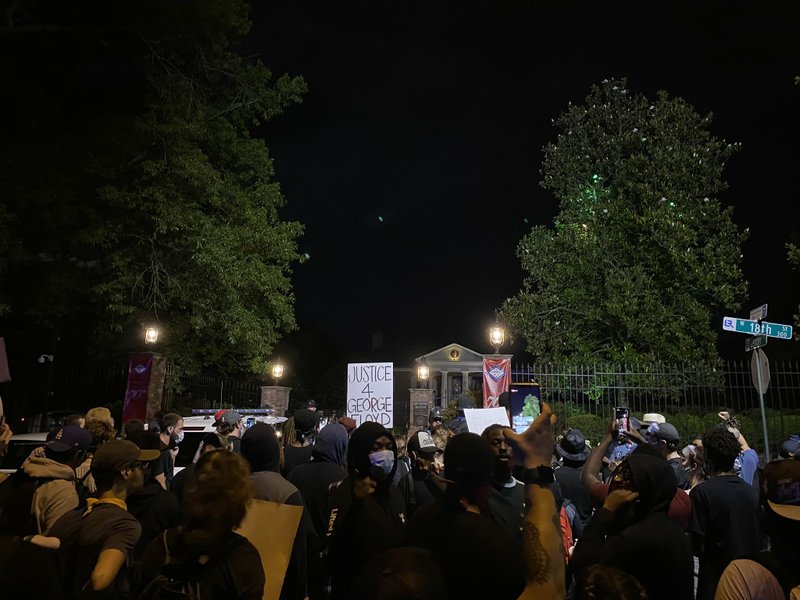 Protesters who had spent several hours marching through downtown Little Rock between the state Capitol and the Governor's Mansion were sent home around 10:30 p.m. Tuesday night by law enforcement at the Capitol.

Some of the demonstrators were seen being detained after bottles were thrown at a police cruiser. Unlike the three previous nights, though, authorities did not use gas or flashbangs to disperse the crowd.

By 10:47 p.m., a group of people who were temporarily detained by police had been let go. The group included an Arkansas Democrat-Gazette reporter, who livestreamed the encounter.

10:30 p.m.: Demonstrators, press told to get on ground after march through downtown Little Rock

At 10:30 p.m., police called for attendees to get on the ground, as some yelled “Press.” Arkansas Democrat-Gazette reporter Josh Snyder took video, holding his phone near the ground as officers shone flashlights down at the group of people.

Demonstrators continued winding their way through downtown Little Rock at 10:15 p.m. Despite a heavy police presence on side streets and a short distance behind the protesters, no one could be seen getting arrested.

Protesters in Little Rock moved to the grounds outside the governor’s mansion by 9:15 p.m., resuming chants of “no justice, no peace.”

State troopers began to arrive and told drivers parked in the residential block nearby to leave.

The remaining demonstrators left the Capitol and proceeded down West Capitol Avenue by 8:45 p.m. They crossed the bridge over Interstate 630 as police stopped traffic on the lanes below. No protesters could be seen entering the lanes of traffic.

Protestors are marching across the Chester Street I-630 bridge pic.twitter.com/wmqjl4n3hw

Just before the the 8 p.m. curfew, protest organizers at the Capitol began warning people to go home. Only about a dozen or so left. By 8:20, only about 150 to 200 protesters remained and police were staying well back. Even so, white protesters encircled a group of black protesters, saying the police would not assault them because they white.

Fifteen minutes before the curfew was set to take effect, a large crowd of demonstrators was still assembled on the steps of the Capitol.

At least two individuals in what appeared to be camouflage uniforms could be seen on the roof of the Winthrop Rockefeller Building opposite the Capitol overlooking the crowd. It was not immediately clear if they were a part of the National Guard or part of a local law enforcement agency.

The governor has also issued an executive order declaring a state of emergency in response to recent protests.

Many demonstrators remained outside the state Capitol building shortly after 8 p.m., the curfew the mayor set earlier in the day.

Before 7:40 p.m., Arkansas State Police temporarily detained two individuals with children in the vehicle on Woodlane and 6th Street, attracting a large portion of the protest.

Scores of demonstrators chanted “No justice, no peace” as they marched through downtown Little Rock and then to the Arkansas State Capitol on Tuesday evening.

They briefly stopped at the intersection where over two dozen protesters had been arrested earlier in the day for blocking traffic, but eventually continued to the Capitol.

Mayor Frank Scott Jr. and police Chief Keith Humphrey announced at a Tuesday afternoon news conference that Little Rock is under an 8 p.m. curfew due to "outside groups" they say are seeking to incite violence at protests.

Humphrey said the department had received intelligence about trained outsiders coming in, as well as credible threats against government officials in central Arkansas.

Scott also addressed a march that he led protesters in last night, away from the Arkansas State Capitol, before some protesters began causing damage. The mayor said he had made a mistake by being caught up in the moment and that he should have left the protest earlier.

The Little Rock Police Department around 5 p.m. said via Twitter that 28 people were arrested in the demonstration at West Third Street and Broadway Street.

"Our Special Response Unit [was] able to effect these [arrests] with minimal to no force," the police department said.

A tweet from the Pulaski County sheriff's office said the county jail was processing the 28 arrested individuals.

Demonstrators seated on the crosswalk did not resist and, in some cases, were lying on the ground when they were carried off by several officers. Their hands were ziptied.

After the row of demonstrators had been arrested, the police left as other protesters remained on the sidewalks.

Another group of protesters has blocked the intersection of 3rd and Broadway, chanting “silence kills” and “I can’t breathe,” with some laying in the street pic.twitter.com/Wi9bvVCGWq

Some held signs in the shape of headstones that bore the names of individuals killed by police.

A Little Rock Board of Directors meeting scheduled for Tuesday evening has been canceled. In lieu of the meeting, Little Rock Mayor Frank Scott Jr. and Police Chief Keith Humphrey will address the media at 4 p.m., according to a news release.

Scott and Humphrey will hold their press availability at the Robinson Center, the release states.

Mayoral spokeswoman Stephanie Jackson in an interview said the board meeting was canceled because of information received from the authorities pertaining to the continuing protests.

Citing intelligence from the U.S. attorney's office for the Eastern District of Arkansas about the potential for "out-of-state antagonists" to attend the protests and instigate violence, Scott on Monday explained he was implementing the curfew "to protect our residents from outside forces who seek to do harm to our city."

"If there were people coming into the city to cause any issues, we didn't want any of our board members to be in the way of that," Jackson said on Tuesday afternoon.

Jackson added that officials knew there would be more questions from the press because of the ongoing demonstrations and as a result scheduled the press conference.

On Monday evening, Scott marched in downtown Little Rock with demonstrators protesting police violence. Arkansas State Police used tear gas for the third night in a row to disperse protesters at the Capitol amid scattered acts of vandalism and violence, including an assault on an Arkansas Democrat-Gazette reporter.