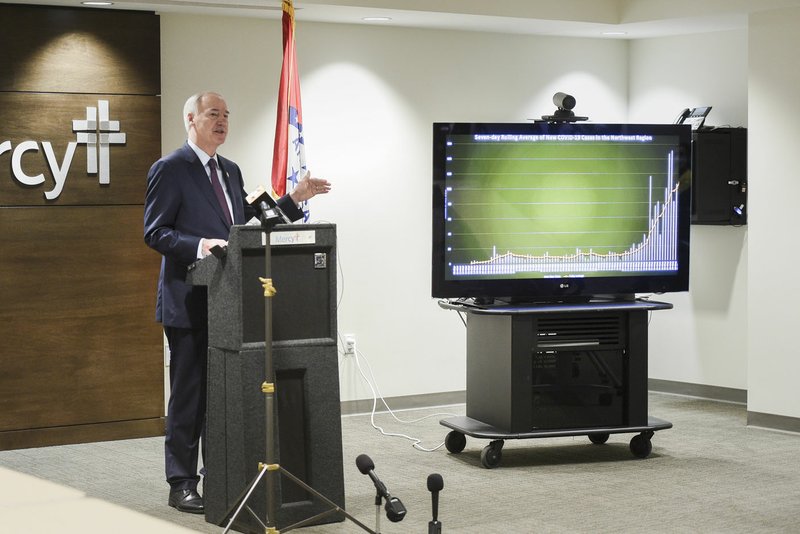 ROGERS -- Benton and Washington counties accounted for more than two out of every five new coronavirus cases in Arkansas since Sunday, according to figures released in the governor's pandemic update Monday.

Gov. Asa Hutchinson came to Rogers to meet with Northwest Arkansas leaders to discuss the situation.

"Obviously, we have a challenge in Northwest Arkansas," he told a meeting of at least 25 hospital administrators, mayors and county officials before the public briefing began.

Statewide the number of cases has risen 190 to 7,443 as of Monday, state figures show.

The pace of growth is slower than last week's record rate, but still causes concern, the governor said at a public briefing, which was also held at Mercy Medical Center in Rogers. The largest daily increase so far, outside of the prison population, was 261 on Thursday. Only three of the 190 new cases reported Monday are in prisons.

"What's driving these numbers in the state is Northwest Arkansas," the governor said. State figures show 53 of the new cases are in Washington County and 29 are in Benton County.

Of the 121 hospitalized for the disease, 45 are in Northwest Arkansas, he said. That figure of 121 is an increase of six from Sunday. He added hospital space remains more than adequate in Northwest Arkansas despite the disproportionate number there, but "it's something we need to get a handle on."

The number of deaths at Monday's briefing remained unchanged at 133 so far, Hutchinson said. However, Sebastian County had its first covid-19 death a little more than an hour before the 1 p.m. briefing began, county Coroner Kenny Hobbs confirmed.

A 63-year-old Hispanic man died just before noon Monday, according to Hobbs, who said he couldn't release the man's name late Monday pending notification of next of kin. The man, a Fort Smith resident, was admitted to a hospital Tuesday. He died in the intensive care unit, Hobbs said.

The governor came to Northwest Arkansas on Monday to underscore a recent jump in new cases of covid-19 in the region. He also met with local leaders at a hospital conference room before the briefing. Those leaders told him people are increasingly lax about safeguards to prevent the virus' spread.

"It's not a matter of the policies in place. It's cabin fever," Mayor Greg Hines of Rogers told the governor. People in Northwest Arkansas followed guidelines for weeks, largely staying at home and saw very few cases of coronavirus in their towns -- until now.

The governor's home is in Rogers. For weeks, the region enjoyed very low levels of the disease, casting doubt on the need for the restrictions on large gatherings and other safeguards, Hutchinson said. Now, the governor said, he has heard of a block party in Rogers with 60 people from kids to adults attending.

"This is just stunning to me," he told local leaders.

"Folks are getting complacent," Benton County Judge Barry Moehring told the governor at the meeting with leaders before the briefing.

The economy and social life can open up safely if, and only if, people take precautions such as wearing masks and observing social distancing, the governor told local leaders.

"We cannot shelter in place for six months," he said. Yet the disease will not come under control until people observe basic safeguards," Hutchinson said.

"The economy is not going to flourish until everyone knows how to do it safely," he said of gatherings and other activities.

The governor told the leader's meeting he was talking directly with business owners to encourage them to insist on customers wearing masks and taking other safeguards. Both he and Dr. Nate Smith, state secretary of health, said they foresee no way to do without masks and other safeguards until there's a covid-19 vaccine. The governor said before the briefing he didn't want to issue an order to require wearing masks because he believes a mandate could be counter-productive.

Smith detailed the disproportionate numbers, noting 43% of the new cases in Benton and Washington counties are in the Hispanic community. In Benton County, 27% of the Hispanic cases were poultry workers, Smith said.

The Hispanic population comprises 16.9% of Benton County residents and 17.1% of Washington County, according to 2019 U.S. Census Bureau estimates.

Of the 571 poultry workers who tested positive for the coronavirus since the pandemic began, 73% are Hispanic, according to figures at the briefing.

Hutchinson said he spoke earlier in the day with leaders from the Marshallese and Hispanic communities about the increase in cases in the Northwest region.

Margarita Solorzano, director of the Hispanic Women of Arkansas, attended the earlier meeting, she said. She emphasized to the governor the lack of Spanish language and culturally effective procedures and material to reach those populations.

The state is having to come up with its own material and approaches because the needs of minority communities aren't even mentioned in material the state is getting from the federal government, she said.

Mireya Reith, executive director of Arkansas United, an immigrant rights group based in Springdale, said she was one of five community leaders who met for about an hour with the governor, Smith and Jose Romero with the Health Department and Steuart Walton, chairman of the governor's Economic Recovery Task Force.

She said she was grateful Hutchinson made time to meet, given the pandemic and protests concerning George Floyd, a Minnesota black man who died in police custody. But Reith said she walked away from the meeting not knowing what the state's next steps would be.

"We're going to need some urgent action. Listening is a first step, and I don't want to dismiss it as not proactive, but it falls short of an actual next step and a plan of action," she said.

She and the minority community leaders stressed many members of their communities must go to work and risk catching the virus regardless of whether there is an outbreak at their workplace.

"They did express a lot of optimism in regards to employers. I don't know if that same optimism is shared all the way down to the workers," Reith said.

The state cannot trace where the disease is coming from and where it is spreading in the region until more people are tested, Smith said. That will show what he called "chains of transmission."

There are 985 active cases in the Northwest region, Smith said. Of those, 608 are in Benton County, he said.

What role poultry plants play in the outbreak is unknown because not enough testing has been done, Smith said. More than 100 new cases last week were found among poultry workers across the state, according to the Arkansas Department of Health.

Smith said Monday the tracking isn't sufficient to show where workers are contracting the virus. He did praise the cooperation of food processing companies in their efforts to track the workers' cases.

Hutchinson praised the steps taken by the poultry industry in the region, saying Tyson Foods now tests every worker and Simmons Foods also tests all applicants.

"They have really set a national model for best practices for the poultry industry" nationwide, he said.

The governor's remarks show he doesn't speak with any of the workers on the floor of these processing plants, said Magaly Licolli, co-founder of Venceremos. Workers have insight into how the plants could be operated with greater safety and the solutions they could propose aren't being heard, she said.

She wasn't included in the Hispanic and Marshallese representatives meeting despite her repeated requests, she said.

"He's only listening to the companies," Licolli said.'

Of the 7,443 diagnosed in Arkansas with covid-19 since the pandemic spread to the United States in March, 1,909 are active, according to briefing figures. Seventy-eight of those active cases are in nursing homes. Another 53 are in prisons. Six of the 190 new cases are health care workers. Seven are nursing home residents. Eight are nursing home staff.

Among active cases, 26 are on ventilators, a decrease of one, according to figures presented at the briefing.

Meanwhile, local governments are supposed to receive a share of the assistance provided to states for covid-19 response, and nationwide that is not happening, 3rd District Rep. Steve Womack, R-Rogers, told the governor at the leaders meeting at the hospital.

Legislation is about to be introduce in Congress, "and I may co-sponsor it, demanding that 25% of that money be returned if it is not distributed to local governments," Womack said.

Hutchinson said the money was legally restricted for spending only for covid-19 related expenses, but includes no system for ensuring that once the state distributes it to cities and counties. Womack agreed he had heard of this problem and that the federal government was working on putting procedures in place.

"We're not going to spend all the money until that is worked out," Hutchinson assured Womack.