Arkansas virus cases up by 375 in day 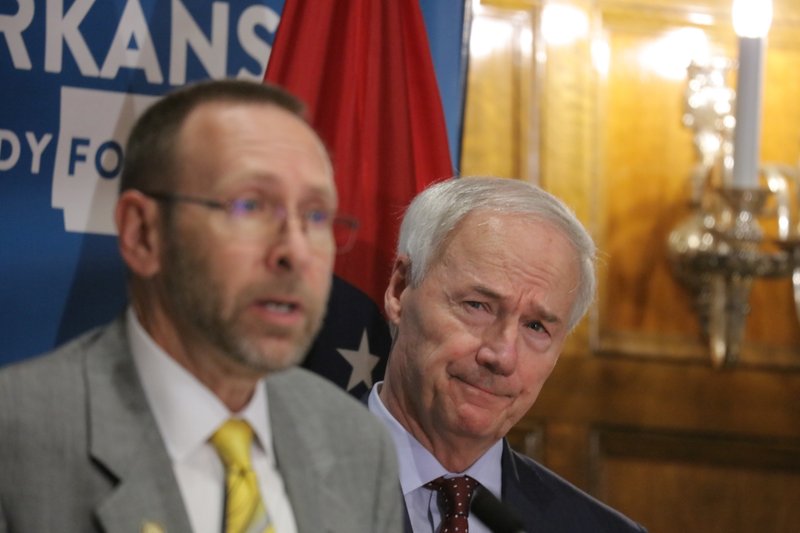 Arkansas' count of coronavirus cases rose Tuesday by 375, including a record 374 cases among the state' nonincarcerated population.

The death toll from the virus went up by three, to 136, while the case tally rose to 7,818. The state's first confirmed case was March 11.

Gov. Asa Hutchinson said the spike in cases "reflects the increased, dramatic increase in testing that we're doing, and that we're really going after the areas that have ... positive cases, that we're having to do more contact tracing, more testing, and part of that is in the Hispanic community and Northwest Arkansas but also in the poultry industry."

Thirty-one of the patients were on ventilators, an increase of five from a day earlier.

Protests sparked by the May 25 death of a handcuffed black man in Minneapolis after a white police officer pressed his knee into the man's neck have raised worries that the crowds could contribute to the virus spread.

At his daily news conference on the pandemic, Hutchinson displayed a photograph from the Northwest Arkansas Democrat-Gazette showing protesters gathered under a statue of a Confederate soldier Monday in the Bentonville square.

Although the protesters were close together, "the vast majority of them all have masks on, and so this is an indication that they are taking this seriously in Benton County and Northwest Arkansas," Hutchinson said.

State Department of Health Secretary Nate Smith said transmission of the virus "is a concern whenever we have groups of people together without social distancing, especially if they're not wearing masks."

Contact tracing, he said, "would be very challenging because people may not know who they were in contact with."

He advised protesters to follow the example of the ones wearing masks in the photograph from Bentonville.

"It would be a tragic thing if people came out to protest an injustice and then ended up infected because of that," he said.

Hutchinson also announced a goal to test 120,000 Arkansans in June -- double the goal he set for last month and equal to about 1% of the state's population each week.

Smith said the new goal had been recommended "to us by our federal partners."

The state already had announced plans to test all of its nursing-home residents and workers this month, which Smith said is about 50,000 people.

While he has maintained that the uptick in new cases isn't linked to the May 4 start of the state's first phase of easing restrictions that were imposed to slow the spread of the virus, Hutchinson said it does mean the state isn't ready for the next stage of looser restrictions.

"It's put Phase Two on pause for now," he said Tuesday.

He added that people in some parts of the state where the number of cases is relatively low have asked him why they can't move on to that stage.

"Well, that was actually the message that I had from Northwest Arkansas two weeks ago," he said.

"They all said, 'We're [having] low cases. Can you let us go to Phase Two and open us up more?' And you could imagine if we'd made that decision what it would look like.

"And so I think there's a lesson there that what might be a low caseload today, we need to watch that, just like we watch the rest of the state, and I think we've proven that is the right approach, is to move our state together."

No new prison cases were announced Tuesday, but one case that was part of an outbreak that was announced earlier was added to the statewide tally after information from a laboratory report was entered into a state database.

Tuesday's increase was the first time the state's count of coronavirus cases among Arkansans who are not prison inmates had risen by more than 300.

Previously, the largest increase had been the 261 noninmate cases added Thursday.

Of the cases added Tuesday, the largest number, 65, was in Benton County.

Pulaski County had 63 new cases. Smith said almost half of of those were residents or workers at a nursing home in Jacksonville. The Health Department declined to release the name of the home.

The number of cases rose by 57 in Washington County; 33 in Sevier County; 21 in Craighead County; 14 in Yell County; and 10 in Crittenden County.

All the state's other counties had fewer than 10 new cases, Smith said.

He said new cases have continued to increase in the state's northwest and southwest public-health regions while decreasing in the northeast and southeast.

In the central region, made up of seven counties, the number of new cases added each day had been flat until Tuesday, he said.

"We'll have to see what happens in central, but that one-day spike is really attributable to the nursing home," Smith said.

The number of workers in the poultry industry who have tested positive, as tracked in Health Department reports, increased by 69 from Monday morning to Tuesday morning, to 640.

They made up 412 of the state's 1,989 cases that were active, meaning the person had tested positive and had not yet recovered, among Arkansans who are not prison inmates or nursing-home residents.

At Ozark Mountain Poultry in Rogers, which has the state's largest workplace outbreak tracked in Health Department reports, the number of workers who were listed as testing positive increased by 12, to 141, from Monday to Tuesday.

A Pilgrim's Pride plant in De Queen was listed as having 87 cases, up from 78 a day earlier.

The cases increased by five, to 65, at a Cargill plant in Springdale and by six, to 39, at a Butterball plant in Huntsville.

Nebo Poultry in Dardanelle was listed as having 63 cases, a number that hadn't changed from a day earlier.

Smaller outbreaks, each with at least five active cases, were listed at a George's plant in Springdale; Wayne Farms in Danville; a Simmons Foods plant in Van Buren; two Tyson Foods plants in Rogers; and Tyson plants in Dardanelle, Springdale and Grannis.

Nine Arkansans who work at a Tyson plant in Broken Bow, Okla., also were listed as having tested positive.

Hutchinson, after visit with poultry representatives Monday in Northwest Arkansas, said the companies are "doing an amazing job in terms of providing for the health, doing their own contact tracing, doing their own testing."

"I have a lot of confidence in what they're doing to keep the facilities running, but also to take care of their workers," he said.

"The company helps identify close contacts within the business and in some cases helps facilitate testing," she said in an email.

Hino Motors in Marion also was listed as having eight workers who have tested positive, including three who have recovered.

Of the poultry workers with active infections, at least 297, or 71.9%, are Hispanic

As of Monday morning, Hispanics, who make less than 8% of the state's population, accounted for 553, or 29%, of the 1,909 known cases in the state that were active at that time.

Jose Romero, the Health Department's chief medical officer, said he has been meeting since early May with a 28-member "covid-19 Latinx stakeholder group," made up of representatives from Hispanic organizations, hospitals, faith groups and others, to discuss ways to increase awareness of the virus among Hispanics.

The group has "discussed testing in hot-spot areas," and is developing Spanish-language videos and written materials on the importance of being tested and taking precautions against the spread of the virus, he said.

A Health Department report on Tuesday listed 18 children and two workers at Methodist Family Health's psychiatric residential treatment center in Little Rock as among those who have tested positive.

Methodist Family Health spokesman Kelli Reep said a child was tested at Arkansas Children's hospital, as part of the hospital's protocol, over the weekend after being taken there for a reason unrelated to the virus.

A Methodist Family Health staff member also tested positive around the same time and was sent home to be isolated, she said.

All 38 children and the staff members at the center have been tested, she said. The center is still waiting on some of the results.

"We are following all of the [state Health Department] guidelines and [Centers for Disease Control and Prevention] guidelines," Reep said. "Once we got our tests back, we knew that we wanted to quarantine all of the children who are positive into one area and separate those who are not positive into another area."

So far, none of the children has had symptoms, she said.

According to Methodist Family Health's website, the center provides treatment for children age 6-17 with diagnosed mental disorders. Most stay four to six months or longer.

The latest virus deaths added to the state's total included the first one in Izard County, the ninth in Union County and the 35th in Pulaski County.

Joe Wigner, a 73-year-old resident at the Courtyard Healthcare and Rehabilitation Center in El Dorado, died Tuesday after testing positive for the virus, according to a Pulaski County coroner's report.

Wigner was admitted to Baptist Health Medical Center in Little Rock on Monday for an abdominal aortic aneurysm and was tested for the coronavirus.

The coroner's report lists the suspected cause of death as "infectious disease," but his sister, Patty Mize said that Wigner had a long history of health issues.

"He did not die of covid-19," Mize said. "He had an aneurysm that spread to his whole body. They could not repair it by surgery."

Wigner had a history of an abdominal aortic aneurysm as well as chronic obstructive pulmonary disease and prostate cancer, according to the coroner's report.

A Health Department report on Tuesday listed 39 residents at the El Dorado nursing home as having tested positive for the virus, including four who died.

Twenty workers at the home also have tested positive, according to the report.

Statewide, 55 nursing-home residents have died from the virus, according to the Health Department's count.

Wigner, who was born in Marcellus, Mich., was the seventh of nine children.

"I really don't know how he ended up in Arkansas," Mize said. "We're a funny family. If we don't hear from one another for years and years, then it's OK.

"My late husband and I rented a car and drove down to Arkansas to see Joe about two years ago. Before that, the last I knew of him was in 1994 and he was living in Wisconsin."

But she has a theory about Arkansas.

[Video not showing up above? Click here to watch » https://www.youtube.com/watch?v=6VihSi03F4Y]

"He was a sweetheart. He was married seven times and had two estranged children," Mize said. "I think he went to Arkansas because he had a girlfriend there. He was a cutie. He had everything going for him. That's why he was married so many times. He had the attitude, 'I'm God's gift to women,' and it worked."

Wigner was a jack of all trades and worked mostly in construction, Mize said. He often had his own construction businesses in states such as Texas and Arkansas.

Mize said she would call her brother once a week at the nursing home.

"Every time I talked to him, he would tell me the same joke over and over again," Mize said. "But then I got jokes off the internet and used two stamps every week to mail him that envelope with new jokes. All the nurses just laughed and laughed. It made him so happy. That's what I'm going to remember about him."

Information for this article was contributed by Jeannie Roberts and Eric Besson of the Arkansas Democrat-Gazette.

Print Headline: Arkansas virus cases up by 375 in day