TAKEOUT TASTINGS: All in for call in 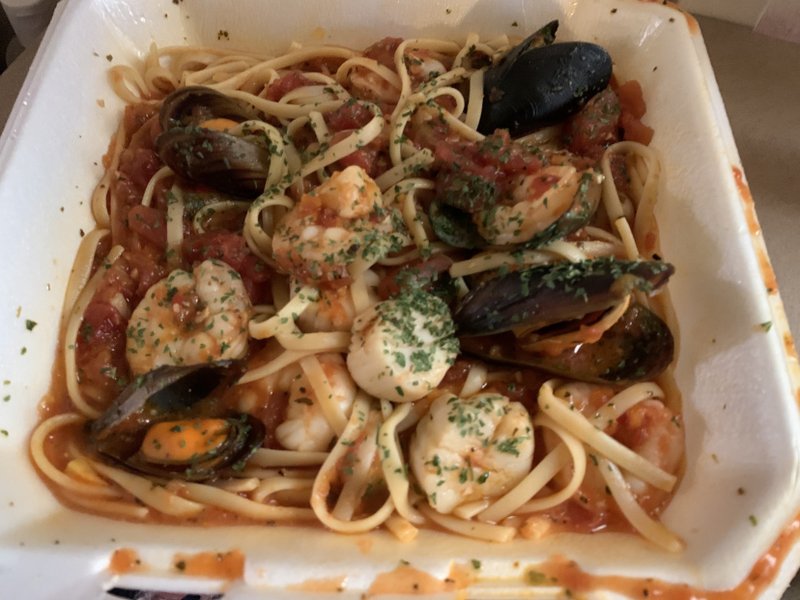 We, as with many we've talked to, are still quite a bit skittish about dining in, even at those places that are strictly adhering to state Health Department guidelines on limiting capacity, table distance, mask-and-glove wearing and standards of cleanliness. (And there have been a few places we've been to that aren't.)

So for the time being, in lieu of reviews, we're pinpointing, cherry-picking and tapping to-go items from local restaurants, by preference locally owned, and mostly close enough so that hot food will still be (mostly) hot when we get it onto our table. It's harder to be anonymous and unannounced when it comes to call-in orders, but we try. We pay for all our meals and, where possible, tip generously.

WHAT WE GOT: Off the breakfast menu, the Root Benny ($9.25), "two farm-fresh poached eggs served over a bed of local, seasonal greens with Grass Roots ham and topped with homemade hollandaise." That menu description applied when you could eat this breakfast item on the premises; the DIY to-go version definitely requires some assembly: a generous pile of tasty shaved ham, two eggs poached medium, an even more generous pile of tangy greens, a cup of hollandaise and a few slices of toasted baguette. We didn't bother assembling anything, just ate it pretty much as it came, from left to right, and made a pretty good weekend breakfast out of it.

HOW IT WENT: We placed our order by phone for curbside pickup, providing a name and make, model and color of car, presumably so a staff member would leap out the door to hand us, first our check and then our food. Didn't quite happen that way. We arrived within a minute of the time specified by the young woman who took our order; after waiting a couple of minutes with no apparent motion except by the gentleman applying a coat of paint to the roof of the front porch, we called back to let somebody know we were waiting. It took yet another couple of minutes for that expected staff member, masked and gloved, to emerge and we paid and tipped him via an iPad; he also stopped by the car behind us to execute the same maneuver, which took another couple of minutes. Shortly afterward he appeared at our car window with our order in a brown paper bag. (The Root has always prided itself on its environmental friendliness; our food came in a compostable clamshell.) Overall wait time: 10 minutes, which, if you add it to the 10 minutes we were told it would take for the order to be ready and the eight-minute trip home, goes a long way to explain why our food was only lukewarm.

HOW IT'S GOING: We've been angling to get to The Root for Sunday brunch for years uncounted, but pre-covid-19, there has always been a line out the door by 10:30 a.m. Getting brunch to go was a comparative breeze. A total of two cars in line at 10:30 proved the order-taker's report that the kitchen certainly wasn't busy.

WHAT WE GOT: Fish and chips ($10.99), two chunks of cod in a puffed-out batter, with a generous portion of fresh-cut fries, cole slaw and tartar sauce, plus separately packaged ketchup and malt vinegar. We've enjoyed this particular item of pub grub on the premises in the "good old pre-pandemic days" and it holds up pretty well as a takeout item. The batter wasn't as crispy by the time we got it home as it would have been if we'd eaten it there, but that's a small complaint. We enjoyed the copious portion of skin-on fries, not quite as wide as wedges, and though we don't normally indulge in ketchup with good fries, it was a welcome enhancement here. Next time we will remember to let them know to hold the tartar sauce, from which we abjure entirely, and the slaw, from which we abjure in general.

HOW IT WENT: Dugan's reopened its dining room a couple of weeks ago, so we placed a walk-in order at the bar, which reopened last week. Took about 10 minutes for our order to come out of the kitchen, which was normal. All Dugan's front-of-house personnel were wearing masks and gloves as per state Health Department directives.

HOW IT'S GOING: There were about a dozen folks in the indoor dining area, plus another table or two on the patio; the bartender said that was slacking off a bit from the previous week, when, she said, the place was buzzing. To-go orders, however, have continually kept them busy, she said.

WHAT WE GOT: Hummus ($3.40) and the Gyros Plate ($10.25), gyros (lamb or a lamb-beef composite, shaved off a vertical saddle on a rotisserie spit), plus pita, tzatziki (a cucumber-garlic-yogurt dip), and salad. It's been too long since we visited Layla's; many other Middle Eastern and Mediterranean places have opened in the interim, and one of the drawbacks of this job is that hitting up the new places makes it hard to get back to the ones we like. Layla's has always done hummus well; it's one of the area's best, with a smooth consistency and good balance between citrus and spice. The gyros is standard but there's a lot of it; dipping it in the tzatziki gave it a nice lift. It's supposed to come with marinated onion, but it didn't, which was just as well because we had forgotten to ask them to hold it. The salad, mostly iceberg but with some darker lettuce, comes semi-soaked in a Greek-style vinaigrette.

HOW IT WENT: Layla's recently opened its dining room, but we placed our order by phone and paid on arrival; it was ready when we arrived a few minutes later.

HOW IT'S GOING: There was one couple dining in and a customer dining just outside the front door. Otherwise the place wasn't particularly busy late in a weekday lunch period.

WHAT WE GOT: The enchiladas lunch combo ($7.25), in our case, two cheese enchiladas, with refried beans and Mexican rice. La Pasadita opened its new home a couple of weeks ago in the Market Place space formerly occupied by the Happy Egg, B-Side and Lilly's Dim Sum Then Some. That's after several months as a food truck after being evicted from the shack-like edifice that used to be The Hop. The menu is surprisingly extensive but we settled on a — two cheese enchiladas, fairly bland but perked up a bit by the presence of sour cream along with the queso and some lettuce on top. The folks who run La Pasadita are from the same family that also owns La Hacienda, so we found the same trademark dry refried beans (we like them that way) in one small chamber of the tripartite foam clamshell and a fairly flavorful orange-y Mexican rice in the other. Between them was a dollop of sour cream and one of guacamole.

HOW IT WENT: The dining room is open; we placed and paid for our order over the counter and waited perhaps four or five minutes for it to come out of the kitchen.

HOW IT'S GOING: There was one gentleman dining at a nearby table late in a recent lunch period. Ours appeared to be the only pending to-go order. Considering that the place is brand new and there's a pandemic in progress, that's not too bad.

WHAT WE GOT: Meatballs ($8.50) for an appetizer, following with Linguine With Seafood ($26), dishes we reprised from our March 2018 review. The meatballs are a little spongy but the chunky, zesty red sauce gives them a good boost, and the portion is big enough to constitute a good small meal. The entree offers plentiful firm shrimp, small scallops and mussels, though no longer baby clams and bits of fish; the noodles were closer to al dente this time but the red sauce in this case still didn't sufficiently elevate the experience.

HOW IT WENT: Graffiti's, which underwent an ownership change a little over two years ago, has still managed to offer the same consistently high level of cuisine it has had for several decades. The dining room is now open, though the server said they haven't made a big deal out of it yet; we used the online ordering system, which baffled us the first time we tried it a couple of weeks ago (we're not sure what became of our order but we hope the kitchen never actually got it); we waited about 10 minutes in the front dining area beyond the promised completion time for our food to come out of the kitchen. Both foam clamshells, small for the meatballs, large for the linguine, were double-wrapped in plastic, first time we've encountered that in our recent travels, and a really good idea for sauced items that are likely to get a little sloppy in transit. Front-of-house staff was wearing masks and gloves, but the gentleman we espied in the kitchen was wearing neither.

HOW IT'S GOING: There were no eat-in customers very early in the dinner period, but there were already four to-go orders lined up and waiting for pickup by the time we left.