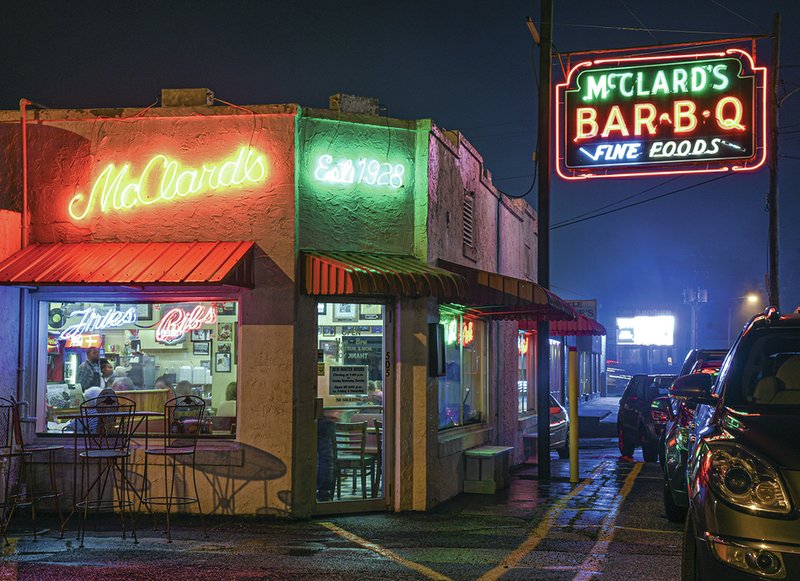 McClards Bar-B-Q in Hot Springs is reopening this week under new ownership. (The Sentinel-Record/Grace Brown)

Hot Springs' landmark McClard's Bar-B-Q, 505 Albert Pike, opened Tuesday morning under new ownership. Lee Beasley, who also owns Bone's Chophouse in Hot Springs and Little Rock, as well as J&S Italian Villa and the Copper Penny Irish pub in Hot Springs, is the new owner. A spokesman says members of the McClard family will continue to be involved "going forward with Beasley in this venture."

The restaurant closed March 20 because of the coronavirus crisis, with the management posting on the restaurant Facebook page, "After careful consideration of our staff and the community, we've decided to close our doors indefinitely to best protect the city we love. We will be monitoring the current situation closely and will provide updates when they're available."

Gladys and Alex McClard founded the restaurant in 1928. Outgoing owners Scott McClard and his wife, Shannon McClard, represent the fourth generation in the family business, according to the restaurant's website, mcclards.com/mcclards-bbq-history.htm. It has been at its current address since 1942. Over the years, the restaurant achieved a reputation for its barbecue pork, ribs, tamales and barbecue sauce; for the lines of customers who regularly wait outside for space to open inside the small building; and for the patronage of former President Bill Clinton, who spent his high school years in Hot Springs.

Speaking of historic restaurants, Franke's Cafeteria, in the Market Place Shopping Center, 11121 N. Rodney Parham Road, Little Rock, closed March 23 with a post on its Facebook page that it was shutting temporarily due to the covid-19 outbreak. Until last week, signs on and near the front door read, "Temporarily closed for covid-19." However, this week those signs have been replaced with signs that say, "Tenant: Please note that the locks have been changed for this space" with a phone number to contact "if you are needing access." That's on top of the cafeteria's phone number having been disconnected and the apparent disappearance of its website, frankescafeteria.com. Those ordinarily are indications that an establishment has closed permanently. Messages left for owner Abraham Delgado, formerly Franke's general manager who bought Franke's from Carolyn Franke in August 2018, for members of the Franke family and for the developer of the shopping center were not returned by deadline. Franke's downtown location in the Regions Bank Building, 400 W. Capitol Ave., closed in September. A Conway branch that opened May 23, 2019, in the former Dixie Cafe building at 1101 Fendley Drive, closed in February.

Franke's, one of the state's oldest restaurants, marked its centenary in 2019, 100 years after C.A. Franke founded it as a doughnut shop on West Capitol Avenue. In 1922, he built a large bakery at 111 W. Third St. and opened the original Franke's Cafeteria in 1924 at 115 W. Capitol, at Louisiana Street, where customers included shoppers at the major downtown department stores. A separate dining room subsequently opened around the corner at 511 Louisiana and shared the same kitchen.

The original cafeteria closed in 1960. "Branches" opened — and closed — over the years in Hot Springs, Fort Smith, North Little Rock's McCain Mall and Little Rock's University Mall. The location in what was originally the new First National Bank building, subsequently the First Commercial and now Regions, opened in 1989. The Rodney Parham Road cafeteria took over what had been Wyatt's Cafeteria in the fall of 1994.

Franke's son, William J. Franke, began running the operation in 1967. William Keliher "Bill" Franke, his grandson, took over in 1983. His wife, Carolyn, and their daughter, Christen Franke, also worked in the business. Christen, who became the manager after she got out of college, died in December 2016 at the age of 37. Bill, her father, died three months later in March 2017 at age 67. 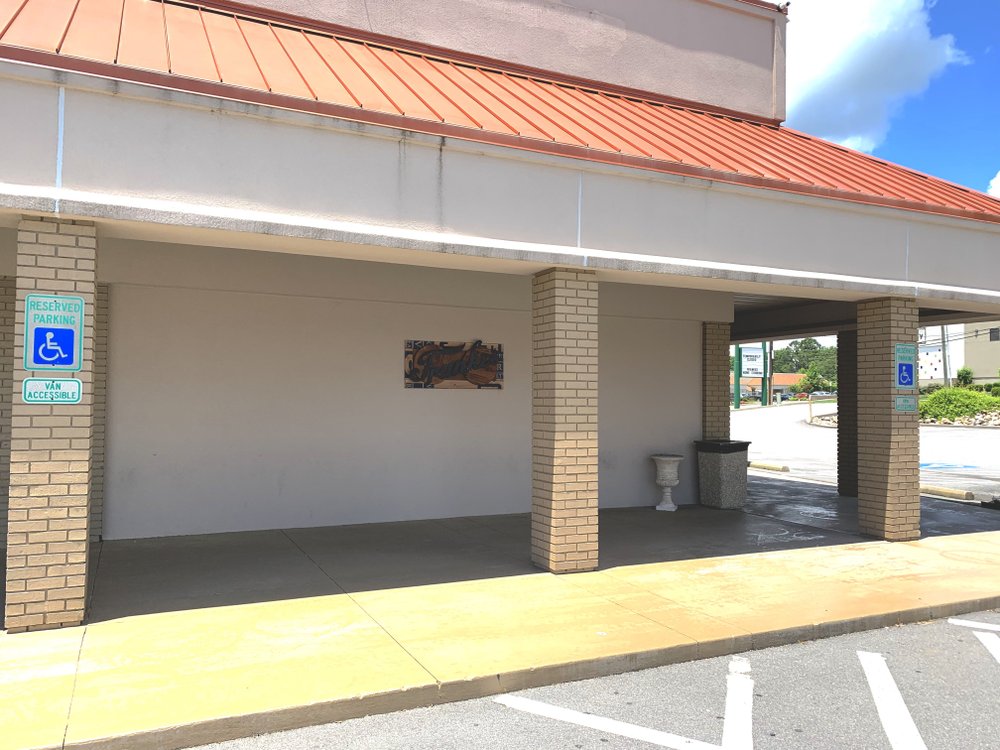 Franke's Cafeteria in the Market Place Shopping Center, 11121 N. Rodney Parham Road, has been closed temporarily since March 20. However, the phone number has been disconnected and the website has disappeared. (Arkansas Democrat-Gazette/Eric E. Harrison)

Chris Tanner says he's still in the final stages of remodeling The Oyster Bar, 3003 W. Markham St., Little Rock, which he and his wife, Samantha, bought from the retiring Virginia Boyd in September, and that he anticipates he'll be opening in about three more weeks. He opened his Cheers in the Heights, 2010 N. Van Buren St., Little Rock, a couple of weeks ago for outdoor-only dining at six patio tables, with one indoor table for parties of 10 or fewer in the private dining room. And he's continuing the hold on reopening the dining room at Samantha's Tap Room & Wood Grill, 322 Main St., Little Rock, which has been closed for more than two months.

The first Arkansas outlet of the Alabama-based Rock n Roll Sushi franchise-chain operation — billing itself as "The only rock-'n-roll-themed, American-style sushi restaurant franchise in the U.S.!" — opened Friday in the former Which Wich storefront, Chenal Creek shopping center, 12800 Chenal Parkway, Little Rock. (Chris Kramolis, the "area developer" and co-franchisee with Jason Alley are also the guys who introduced Arkansas to Tropical Smoothie Cafe.) See the complete menu and order online at rnrsushiu.com; there's a long list of classic and "headliner" rolls, an almost-as-long list of appetizers and a selection of hibachi-cooked entrees. A beer-and-wine license, we're told, is pending, Hours are 11 a.m.-9 p.m. daily. The phone number is (501) 313-4241; the Facebook page, facebook.com/rnrsushi.littlerock.

South on Main, 1304 Main St., Little Rock, got approval from the Capitol Zoning District Commission to build a rear patio, with an adjoining semi-covered dining area that leads to an open-air dining area and covered bar in the alley behind the building. In a story reporter Rachel Herzog filed last week, owner Don Dugan says there were plans to build such a patio before the coronavirus pandemic, but it will allow him extra seating so he can leave more space between diners if and when he reopens for dine-in service, possibly this fall. It will also provide an option for customers who don't want their dinner conversations overpowered by a musical act. There was some opposition from neighbors citing concerns about parking; to ensure the expanded dining area complies with the district's parking requirements, the commission is requiring that the lot across the street at 1301 Main be discontinued as a commercial parking lot and the payment kiosk be removed. To answer concerns regarding music spilling out into the neighborhood, the patio proposal included language that no new speakers or similar equipment would be installed and Dugan said that while there might be some live music outside, he intends to follow the city's noise ordinance, which prohibits loud music in residential areas after 10:30 p.m., and he doesn't plan to have "screaming death metal at 3 a.m. We don't want to be those guys."

We have it directly from the folks at Simmons Bank Arena in North Little Rock that the former Exxon station at East Broadway and Interstate 30 has been demolished to make way for a Starbucks. No word yet on a timeline.

You Scream Holdings LLC will open a Dairy Queen at 10 a.m. Monday on the end cap of a Big Red convenience store at 708 E. Beebe Capps Expressway, Searcy. As per usual with DQ openings, the first 100 customers to buy a DQ cake will receive one free mini Blizzard each week for a year. The operation offers a drive-thru for pick-up and third-party delivery. Hours are 10 a.m.-10 p.m. Monday-Friday. The phone number is (501) 368-0506.

And the Little Rock Hurts Donut Co. outlet, 107 E. Markham St., will give 10% of its sales on Friday, National Donut Day, to the Arkansas Freedom Fund, which provides support programs for veterans. The Springfield, Mo.-based chain/franchise operation partners with local charities that serve military and emergency services. Visit wannahurts.com.