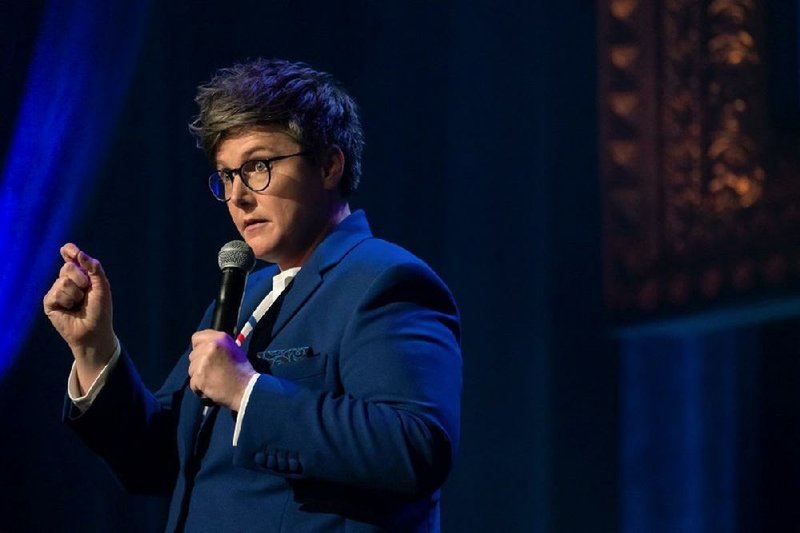 Given the current state of events in this country and around the world, laughter is in high demand in Courtneyville. Thankfully, Netflix dropped a new stand-up comedy special last week from an Aussie named Hannah Gadsby. After reviewing Patton Oswalt's new special a couple of weeks ago, I had no idea what I was in store for with the lady from Down Under.

At the beginning of Hannah Gadsby: Douglas, the comedian walked out onto stage in front of a dog completely made of crayons. I had no idea what that was about. My favorite comedian is the late John Pinette (God rest his soul). He was a big guy and made a lot of food jokes. When he walked out on set, you typically saw fake signs for restaurants. OK. I know what I'm getting here.

But right away, Gadsby tells me exactly what I'm going to see in the next hour and 12 minutes. She told her audience what was coming so she could set their expectations, and that's genius! People can't be disappointed if you set their expectations for them and then meet said goals. Right out of the gate she gave me the table of contents for her show, and I nodded. OK, now that I know what's in the mystery box, let's get the show on the road.

Before I get too far into the review, I wanted to take a moment to acknowledge how subjective comedy is. A joke that might make one person roll on the floor in tears could soar over another individual's head. And that's OK. Just because I enjoyed Patton Oswalt's I Love Everything doesn't mean I was going to love everything else Netflix had to offer me in the world of stand-up.

And I especially felt the need to add that disclaimer because a quick look at the Rotten Tomatoes review for this special showed a pretty big gap between what the critics rated her special and what audiences (or maybe trolls making fake accounts pretending to be audiences) rated her special. Her critical review sits at 91%. Her audience review sits at 56%. Yikes. I'm getting flashbacks from The Last Jedi.

I get it. Hannah Gadsby is not everyone's cup of tea. But she was pretty damn funny to me. I'm also a sucker for puns, though, so maybe she knew I'd be watching. Another disclaimer: I did not view her previous stand-up Nanette. But apparently it earned her some hatred and online trolls. She had a few jokes about them.

Once the table of contents was concluded, the Aussie started in on making fun of Americans. Though, to be fair, in her table of contents, she warned it was coming, giving sensitive audience members the chance to leave.

What surprised her the most coming to America is that we aren't stupid. And if that's not the most backhanded compliment I've ever received. I've been feeling pretty smart lately because my wife and I have been re-watching Leverage. But, good thing it's a surprise Americans aren't stupid, at least to this Aussie.

I thoroughly enjoyed her comparing what we've done with the English language as opposed to her home continent, which, I'll remind everyone, started as a penal colony. She found great amusement in biscuits, which we call cookies. And what we call biscuits (you know, the stuff you smother in sausage gravy), she referred to as a rogue scone, or a scone that forgot its manners. I got a good chuckle out of that one.

Oh, and she loves the word "y'all" because it's so inclusive. And speaking of inclusive, her material was extremely inclusive, even including gender nonbinary folks in a bit. How often do you see that in a stand-up routine, let alone a funny stand-up routine?

I found Gadsby's weakest material to be about her trip to the dog park. It probably could have had been cut by a minute or two, being a little too random even for my tastes.

And from there, this lovely lady got into her "controversial" material, which I suspect is the primary reason she has so many negative audience reviews on Rotten Tomatoes. Because it's a lot of digs at the patriarchy. And boy do those boys hate those jokes. But to be fair, she warned about those in the table of contents as well.

This is the stretch of her material I loved the most, from her pufferfish moments (and I laughed EVERY time she made the pufferfish sound) and her almost defense of golf to her take on the Teenage Mutant Ninja Turtles. And she could talk about their names in great detail because she has a degree in art history and knows her renaissance artists.

My favorite quote to come out of this section was how men got to name everything. That's how birth control ended up being called something as nondescript as the pill. "What does it do? Witchcraft. Shut up. Call it the pill."

At one point, her stand-up bit turns into a silly presentation on renaissance art. And I'm thinking, "Where is she going with this?" Then those thoughts are interrupted by laughter, because she's talking about nude trios of women building a fort while trying to make the bed.

Perhaps the most pointed bit of Netflix's special came from her material about having autism and what it's like to go through life with it. This is where her most relatable side presents itself. Because she opens it by tearing anti-vaxers to shreds. Which, I know everyone is entitled to their own opinions, but those folks aren't. Not on solid science, which has proved time and time again that vaccines don't cause autism.

Gadsby actually had a great quote on that. She said, "Vaccines don't cause autism. Do you know what does? No! You don't!" And she's right.

She talked about being a child and the difficulties of going from being a teacher's pet to the most hated student in one day without understanding why. The day she was diagnosed with autism was one of her best because everything finally made sense, she said. And what makes this bit especially brilliant to watch is it's the perfect combination of how relatable and intelligent she is relaying what it's like to have this disorder in life.

It's commentary, jokes, expertise, and a dash of hard reality thrown together to round out her show. The good stuff from which comedy is made.

Her final moments in the special can best be described as a lightning round of joke after joke, and I loved it. Fast flying humor was the perfect pace for me, and it was just zoom zoom zoom. Some jokes worked. Some didn't. But you didn't focus on the ones that didn't because you were off to the next joke that likely would make you laugh.

It's there she brought everything full circle, and I mean everything. Golf, Waldo, Douglas pouches, autism, it all flies up into one cyclone of a last trip to conclude the show. Then, before you expect it, the special is over.

This Aussie made me laugh for over an hour. She's an inventive and understandable pufferfish who knows her haters are out there and happily welcomes them. I love a funny comedian that can take on the world. And her material's inclusiveness is just icing on the cake.