MINNEAPOLIS -- Hollywood celebrities, musicians and political leaders gathered in front of the golden casket of George Floyd at a memorial Thursday for the man whose death at the hands of police sparked global protests, with a civil-rights leader declaring it is time for black people to demand, "Get your knee off our necks!"

The service -- the first in a series of memorials set for three cities over six days -- unfolded at a sanctuary at North Central University as a judge a few blocks away set bail at $750,000 each for the three fired Minneapolis police officers charged with aiding and abetting murder in Floyd's death.

"George Floyd's story has been the story of black folks. Because ever since 401 years ago, the reason we could never be who we wanted and dreamed to be is you kept your knee on our neck," the Rev. Al Sharpton said in a eulogy.

"It's time for us to stand up in George's name and say, 'Get your knee off our necks!'"

[Video not showing up above? Click here to watch » https://www.youtube.com/watch?v=CGVN5F_BQK0]

Floyd, a 46-year-old out-of-work bouncer, died May 25 after a white police officer, Derek Chauvin, put his knee on Floyd's neck for several minutes as Floyd lay handcuffed on the pavement saying he couldn't breathe. Chauvin has been charged with murder, and he and the other officers could get up to 40 years in prison.

From coast to coast, and from Paris and London to Sydney and Rio de Janeiro, the cellphone video of Floyd's death has set off sometimes violent demonstrations against police brutality, racial bias and inequality.

Those gathered at Thursday's tribute stood in silence for 8 minutes, 46 seconds, the amount of time Floyd was alleged to be on the ground under the control of police.

Sharpton vowed that this will become a movement to "change the whole system of justice."

'A WAY WITH WORDS'

"All these people came to see my brother," Philonise Floyd told the crowd at the memorial in awe as he recounted their childhoods playing catch and eating banana-mayonnaise sandwiches. "That's amazing to me that he touched so many people's hearts because he touched our hearts." He and other family members spoke lovingly of Floyd, who was well over 6 feet tall, which earned him the nickname "Big George."

"George, he was like a general," Philonise Floyd said. "Every day he would walk outside there would be a line of people wanting to greet him. ... He was powerful, man. He had a way with words. ... Everybody loved George."

It was not the coronavirus that killed Floyd, the family's attorney Ben Crump said, but the "pandemic of racism and discrimination."

The casket was covered in red roses, and an image was projected above the pulpit of a mural of Floyd painted at the street corner where he was arrested by police on suspicion of passing a counterfeit $20 bill at a convenience store. The message on the mural: "I can breathe now."

A small band and choir sang Goin' Up Yonder and other classic gospel songs as mourners gathered.

The sanctuary normally seats 1,000, but because of the coronavirus outbreak, the capacity was reduced to about 500, and many mourners wore masks, some with "I can't breathe" on them.

Outside, hundreds chanted Floyd's name as a hearse prepared to carry his body away.

A 500-person service Tuesday will take place at The Fountain of Praise church and will include addresses from Sharpton, Crump, and the Rev. Remus E. Wright, the family pastor. Former Vice President Joe Biden, the presumptive Democratic presidential nominee, may attend, and other political figures and celebrities are expected as well. A private burial will follow.

Floyd's final journey was designed with intention, Sharpton said ahead of Thursday's service. Having left Houston for Minneapolis in 2014 in search of a job and a new life, Floyd will retrace that path.

Clayborne Carson, director of the Martin Luther King Jr. Research and Education Institute at Stanford University, said the impact of Floyd's death will ultimately be measured by changes in how police treat black people and the disparate rates at which black men are incarcerated.

"Otherwise, it'll just be the next George Floyd and the one after that," he said.

Across the U.S., where protests had been marked by bouts of lawlessness since last week, relative quiet continued for a second-straight night Wednesday after a decision by prosecutors to charge the three other officers at the scene and file a new, more serious count of murder against Chauvin.

The new charges in Minneapolis punctuated an unprecedented week in recent American history, in which largely peaceful protests took place in communities of all sizes but were rocked by bursts of violence, including deadly attacks on officers, theft, vandalism and arson. In Minneapolis alone, more than 220 buildings were damaged or burned, with damage topping $55 million, city officials said.

More than a dozen deaths have been reported.

Nationwide, more than 10,000 people have been arrested, an Associated Press tally found.

Los Angeles has had more than a quarter of the national arrests, followed by New York, Dallas and Philadelphia. Many of the arrests have been for low-level offenses such as curfew violations and failure to disperse. Hundreds were arrested on burglary and looting charges.

As cities were engulfed in unrest, politicians claimed that the majority of the protesters were outside agitators, including a contention by Minnesota's governor that 80% of the participants in the demonstrations were from out of state.

The arrests in Minneapolis tell a different story. In a nearly 24-hour period from Saturday night to Sunday afternoon, 41 of the 52 people cited with protest-related arrests had Minnesota driver's licenses, according to the Hennepin County sheriff.

In the nation's capital, 86% of the more than 400 people arrested as of Wednesday afternoon were from Washington, D.C., Maryland and Virginia.

Fundraiser organizers said hundreds of thousands of the dollars raised will go to Black Lives Matter LA, as well as to the National Lawyers Guild, a progressive group that has been defending civil rights activists since the 1930s.

Kath Rogers, executive director of the Los Angeles office of the National Lawyers Guild, said she was surprised by the large number of arrests in that city. The office is calling on those arrested to be in contact so they can be part of the group's defense. So far, they have heard from about 400 people, she said.

Los Angeles Chief Michel Moore told the city's Police Commission on Tuesday that the bulk of the arrests, about 2,500, were for failure to disperse or curfew violations.

The rest were for crimes including burglary, looting, assaults on police officers and other violence, Moore said.

The only other U.S. city with an arrest toll that comes close to Los Angeles' is New York, with about 2,000, according to AP's tally.

Meanwhile, the American Civil Liberties Union and other groups filed a lawsuit Thursday against the Trump administration, alleging that officials violated the civil rights of peaceful protesters. The demonstrators were removed from a park Monday near the White House by police reportedly firing smoke bombs and pepper balls. After the protesters were cleared, President Donald Trump walked to a nearby church to pay his respects and have a photo taken.

The ACLU called it a "coordinated and unprovoked charge into the crowd of demonstrators."

The lawsuit was filed on behalf of the group Black Lives Matter D.C. and individual protesters who were in the park at the time.

In other news Thursday, a judge set bail at $750,000 apiece for three fired Minneapolis police officers charged with aiding and abetting in the killing of Floyd. Tou Thao, Thomas Lane and J. Alexander Kueng made their first appearances in Hennepin County District Court.

The Minneapolis Police Department fired them last week, along with Chauvin, who is charged with second-degree murder and second-degree manslaughter in Floyd's May 25 death.

Defense attorneys argued for lower bail. Attorney Earl Gray, representing Lane, told the court that Chauvin was the senior officer at the scene and that when Floyd died it was only Lane's fourth day on the job. It was also Kueng's fourth day as an officer.

Gray said all Lane did was to hold Floyd's feet so he couldn't kick. He also pointed out that the complaint says Lane asked Chauvin twice if they should roll Floyd over and expressed concern that Gray might be in delirium. The attorney said Lane performed CPR in the ambulance.

"What was my client supposed to do but follow what his training officer said? Is that aiding and abetting a crime?" Gray asked.

Attorneys for Kueng and Thao did not address the merits of the charges in court and told reporters afterward that they declined to comment on the case for now out of respect for Floyd's family on the day of his first memorial service.

A date for Chauvin's first court appearance has not been set.

Information for this article was contributed by Amy Forliti, Scott Bauer, Nomaan Merchant, Anita Snow and Steve Karnowski of The Associated Press. 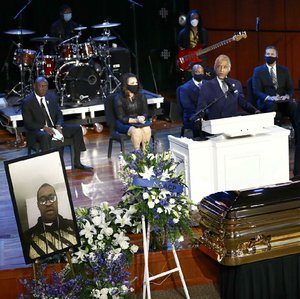 The Rev. Al Sharpton delivers a eulogy Thursday at the memorial service for George Floyd at North Central University in Minneapolis. Sharpton said the outcry over Floyd’s death will become a movement to “change the whole system of justice.” More photos at arkansasonline.com/65memorial/. (AP/Julio Cortez) 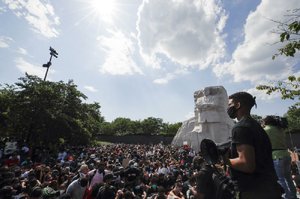 People protest Thursday at the Martin Luther King Jr. Memorial in Washington. That protest and others across the country remained relatively quiet after days of chaotic marches. (AP/Alex Brandon) 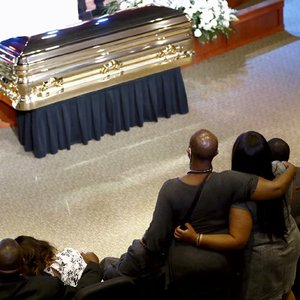 Members of George Floyd’s family stand Thursday as the Rev. Al Sharpton speaks at a memorial service for Floyd in Minneapolis. A small band and choir sang Goin’ Up Yonder and other classic gospel songs as mourners gathered. (AP/Julio Cortez)