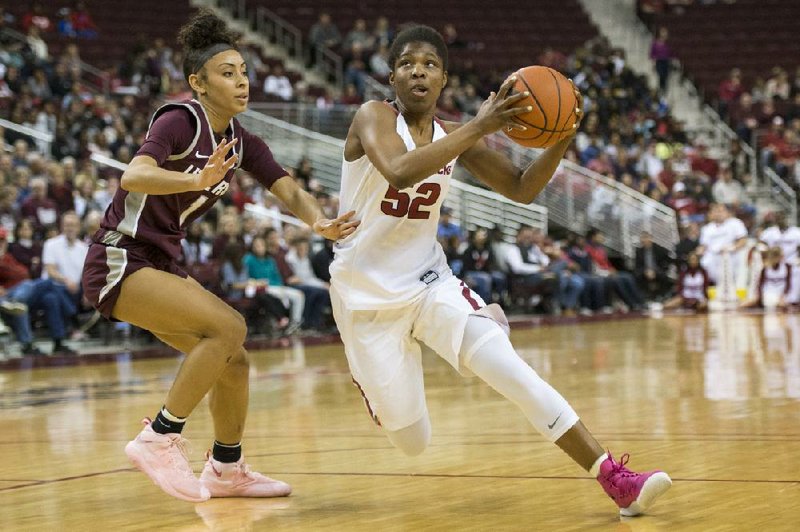 The Razorbacks will play UCA in a volleyball tournament in Conway this fall, and the Bears track and field teams will compete at the UA indoor and outdoor meets in 2021.

“It’s historic,” UCA Athletic Director Brad Teague said. “When I was telling the staff earlier in the week this looks like it’s going to come about, the young kids working for us who are from out of state didn’t really get it. But the folks that have been here forever just couldn’t believe this is happening.”

Yurachek said he told Arkansas’ head coaches in a Zoom meeting Wednesday they are free to schedule UCA and ASU in all sports other than football.

“We’re scheduled out in football for the next five or six years,” Yurachek said. “So there’s no discussions going on with either [ASU or UCA] about football scheduling at this point.”

“We competed against [UALR and UAPB] and the world didn’t come to an end,” Yurachek said. “It just made sense for us to extend this past the borders of our sister institutions into all the Division I schools in our state.”

The Razorbacks played regular-season games against UALR in baseball and women’s basketball in 2019 as well as an NCAA Tournament soccer match. Arkansas won each time, except for the Trojans’ 17-7 baseball victory against the Razorbacks, who advanced to the College World Series for the second consecutive year. Arkansas and UALR also played an exhibition men’s basketball game last season, which the Razorbacks won in Walton Arena.

Arkansas and UALR were scheduled to play in baseball in 2020, and UA women’s basketball Coach Mike Neighbors said the Razorbacks and Trojans will play basketball again during the 2020-21 season.

Arkansas has scheduled football games against UAPB in 2021 and 2024 in Fayetteville.

“We said last year, ‘Hey, we’re dipping our toe in the water and see how this is received across the state,’ and I think it was positively received,” Yurachek said of playing UALR and UAPB. “I think playing Arkansas State and UCA will be positively received.”

Yurachek said his decision to allow the Razorbacks’ coaches to schedule ASU and UCA was made in consultation with Arkansas Chancellor Joe Steinmetz.

Playing ASU and UCA fits Arkansas’ desire to have more regional schedules, Yurachek said, in response to the coronavirus pandemic.

“As we look at trying to eliminate the majority, if not all, of our commercial flights for our team travel in the fall, I think there are some other schools around the state that are trying to do some things of that nature,” Yurachek said. “So this just provides two more [scheduling] opportunities for our coaches.”

Yurachek said not having to fly commercially is the main reason for scheduling more regional matchups, but he added that cutting travel expenses also is a benefit.

“We’ve asked our coaches just to try to do their best to schedule competitions where a commercial flight is not necessary,” he said. “Whether that’s changing the schedule or changing the way they travel.”

“I’m not bent out of shape,” ASU Athletic Director Terry Mohajir said of Arkansas not scheduling the Red Wolves in football. “No, not at all. Not even in the least bit. I just need games.”

UCA opened the 2019 football season by winning 35-28 at Western Kentucky, which beat Arkansas 45-19 at Fayetteville on Nov. 19 in what turned out to be Chad Morris’ final game as the Razorbacks’ coach.

“Arkansas still has 85 SEC scholarship athletes. We only get 63 scholarships. We know we’re undermanned against a team like that. But it would be fun to play Arkansas. At some point, I think we will.”

Teague said the Arkansas and UCA volleyball teams will play Sept. 11 in the Farris Center in the Central Arkansas Invitational. Arkansas had been scheduled to play in an out-of-state tournament that weekend, Yurachek said.

“I have to give Hunter all the credit for this,” Teague said of Yurachek agreeing to let Arkansas coaches schedule UCA teams. “We really appreciate him. All of our coaches are reaching out to their coaches to see if we can play this year, and if not, then on future schedules. I believe a baseball game might be set already.”

“It’s another option for a good regional matchup that we can drive to,” Mohajir said. “It’s financially responsible to try to play teams as close as you possibly can. That’s what we’re all looking at right now in the college athletics landscape.”

Mohajir said it will up to ASU’s coaches whether to schedule Arkansas.

Yurachek said it’s not realistic to expect Arkansas to schedule ASU and UCA in every sport except for football.

“Some of our sports schedules, like football, are already set for the foreseeable future,” Yurachek said. “But this allows our sports that may have some scheduling challenges this year or in future years or have some openings to move forward playing against some schools within the borders of our state.”

Yurachek said he expects Arkansas to schedule ASU and UCA on a long-term basis along with UALR and UAPB.

“We’ve kind of opened the faucet, and I don’t know that we’ll shut off the faucet anytime soon unless there becomes some issue scheduling these institutions, and I don’t foresee what that issue would be,” Yurachek said. “Everything went very well during the past year in our competitions against UALR and UAPB.

“This is just an extension of opening up a couple more institutions across the state of Arkansas that we can compete against.” 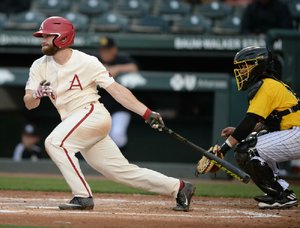 Trevor Ezell of Arkansas gets a hit in a 2019 game against UAPB. The Razorbacks’ policy of playing in-state schools will be expanded to include Central Arkansas and Arkansas State in most sports. (NWA Democrat-Gazette/Andy Shupe) 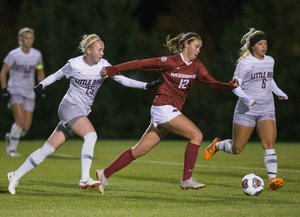 Kayla McKeon (12) of Arkansas drives toward the goal as Fanney Einarsdottir (25) and Morgan Smocovich of UALR defend in Arkansas’ 5-1 victory in the 2018 NCAA Tournament. In 2019, Arkansas played UALR and UAPB in several sports. On Friday, Arkansas said it is open to scheduling Central Arkansas and Arkansas State in sports other than football. (NWA Democrat-Gazette/Ben Goff)