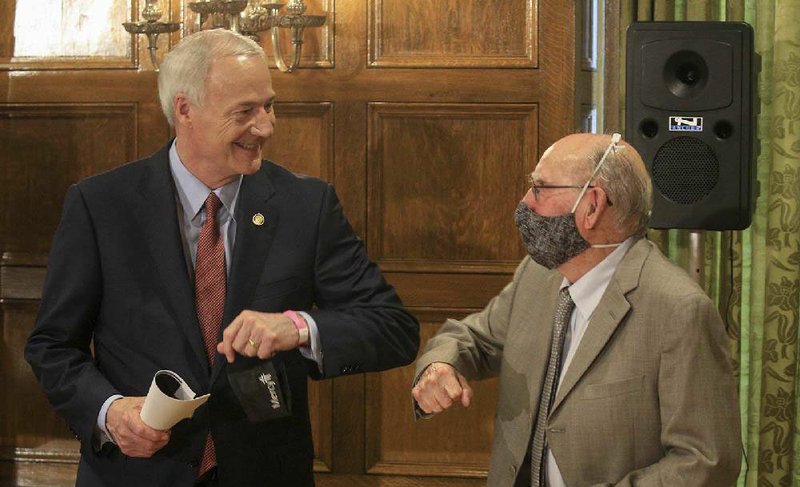 Gov. Asa Hutchinson said Friday that he hoped the state's growth in new coronavirus cases had begun to level off after the count rose by 226, the smallest one-day increase since Monday.

Friday's increase followed spikes of more than 300 on two days this week, including a record 374 cases that were added from the state's noninmate population on Tuesday.

A graph at Hutchinson's daily news conference on the pandemic indicated that the average number of cases added each day over a rolling seven-day period had dipped slightly after increasing each day for the previous seven days.

"Hopefully, when you see that flatten out up there, hopefully that will continue," the Republican governor said. "That would be a good sign for us."

Thirty-five of the patients were on ventilators, an increase of three from a day earlier.

Also on Friday, state officials reported that an inmate at the East Arkansas Regional Unit near Brickeys had tested positive for the virus, making it the fifth lockup in the state where an infection has been confirmed among inmates.

The state Department of Health also released a request for qualifications to hire a company to provide a team of about 350 workers to assist with contact-tracing efforts.

[Video not showing up above? Click here to watch » https://www.youtube.com/watch?v=BQSPZ2_96Qc]

"We are hoping that, within the next few weeks to a month or two, we will be able to more than double our capacity for contact tracing," Smith said.

Currently, "I would say that our contact tracing team is handing it, but they are definitely stretched," he said.

Hutchinson also said he would speak more on Monday about the possibility, which he first raised on Thursday, of beginning a regional approach to lifting restrictions that were imposed to slow the spread of the coronavirus.

Data that he presented at the news conference, showing the number of tests that had been conducted in each of the state's five public health regions, "is very informative to us," he said.

"I think it tells us that we're really testing all across the state in every region of the state, and it gives us a good sense as to where we are in terms of the spread of covid-19," he said.

Among workers in the poultry industry, the number of cases grew by 168, to 808, from Tuesday to Friday, according to Health Department reports.

That included 505 cases that were considered active, up from 412 on Tuesday.

At Ozark Mountain Poultry in Rogers, which has the largest outbreak, the number of cases grew by 25, to 166.

That raised the total plants on the list to 18.

The Health Department also reported that five employees at the Mexican Consulate in Little Rock had tested positive for the virus.

Seven employees of Husqvarna, which makes lawn mowers, chain saws and other outdoor power tools, in Nashville have also tested positive, according to the Health Department.

Statewide, 2,422 cases were considered to be active.

Active cases increased by 55, to 392, among black residents and by 28, to 175, among Native Hawaiians and Pacific Islanders, which include the Marshallese.

Three of the cases added to the state's total Friday were test results from prison inmates. Those are often added to the statewide tally several days after the test, after information from laboratory reports are entered into a state database.

A state website indicated that the number of cases increased by 53 in Washington County; 26 in Pulaski County; 22 in Benton County; and 13 in Craighead County.

Crittenden and Yell counties had increases of 10 cases each.

In each of the state's other counties with new cases, the increase was fewer than 10.

Washington and Benton counties continued to have the highest number of cases that were active, meaning the person had tested positive and had not yet recovered.

Pulaski County had the next highest total, 285.

Hutchinson used his news conference to highlight the state's contact-tracing efforts, using the 190 cases that were added to the total on Monday as an example.

As of Friday, the department had been able to contact 144 of them.

From that group, it identified 222 people who were at risk of having the virus based on their contact with a person who tested positive.

"We're interested in the people [those who have tested positive have] had close contact with, and we define that as being within 6 feet of another person for greater than 15 minutes," Dillaha said.

She said the department considers someone to be potentially infectious two days before they began having symptoms.

For those who test positive but have no symptoms, the infectious period is considered to start two days before the test was administered.

People at risk of having the virus, based on their contact with an infected person, are directed to self-quarantine for 14 days and advised to get tested, she said.

People who test positive are directed to isolate themselves for at least 10 days after they first develop symptoms and until they haven't had a fever for three days.

Those who test negative are still directed to quarantine themselves for 14 days because the negative result doesn't necessarily mean they weren't infected, she said.

Until the two weeks have passed, they could still become ill, and test positive, based on their exposure to the infected person.

The people known to be infected, as well as their contacts, are monitored through an electronic system that checks on their symptoms every day.

"If there's a problem, they have a nurse or someone they can contact about what to do next, if they need to get tested or go to the hospital," Dillaha said.

Health Department spokesman Gavin Lesnick said he didn't have information Friday on how many of the 222 people at risk of having caught the virus were reached by the department.

But he said it's a "sizable majority," because about two-thirds of them live in the same household as the person who tested positive.

One person of the 190 died, and 19 had already recovered as of Friday.

Hispanics made up 52% of Monday's cases, with the largest number coming from Washington, Benton and Yell counties.

"This is characteristic of this sort of second wave that we're seeing," Smith said. "Again, mostly from the northwest part of the state, tend to be younger individuals, and a relatively large proportion in the Latino community."

The East Arkansas Regional Unit is about 30 miles from Forrest City, the site of a federal prison complex where more than 600 inmates and 18 staff members have been infected, though the state Department of Corrections has previously said that the two prisons do not share any staff members.

Corrections Department spokesman Cindy Murphy said that other inmates and staff members who have come in contact with the positive inmate at the East Arkansas Regional Unit are being tested for the virus. Four barracks have been placed on lockdown.

She said staff members also were looking into the possibility of an outbreak at the North Central Unit in Calico Rock, though no cases have been confirmed there.

Prison officials there quarantined an entire barracks after the prison's health care provider, Wellpath, received a false report that an inmate had tested positive.

"There was some indication that we had a positive case there, but that has since come back to us negative," Murphy said.

Calico Rock prison officials had already begun testing on the barracks that was under lockdown. Inmates there will remain under quarantine until their results are returned, Murphy said.

Meanwhile, a report from the Jefferson County coroner's office identified Larry Akins, 74, as the inmate from the Cummins Unit who died of covid-19 Thursday.

He pleaded guilty in 2007 to 11 counts of rape and nine counts of second-degree sexual abuse that occurred between 2003 and 2006 at Gingerbread Day Care, a Van Buren business that he and his wife, Mary, owned.

The victims ranged in age from 3 to 8.

Larry Akins was sentenced to 40 years in prison.

According to the coroner's report, he died in the intensive-care unit at Jefferson Regional Medical Center in Pine Bluff of cardiorespiratory arrest and covid-19.

Mary Akins pleaded guilty in 2007 to failing to report her husband's crimes and received a five-year suspended sentence with fines and fees of about $2,000.

According to the Health Department, 10 inmates at the Cummins Unit died earlier in an outbreak that infected 963 prisoners and 65 employees.

Outbreaks also have occurred in Pine Bluff at the Randall L. Williams Unit, which had one inmate who died of covid-19, and in Little Rock at the Central Arkansas Community Correction Center, where an employee died of the virus.

The Health Department's count of virus deaths among Lincoln County residents rose Friday by one, to 11.

Lesnick said Friday that the removal from the department's website on Thursday of a death that had been listed in Polk County reflected a misclassification that had been fixed.

Information for this article was contributed by John Moritz, Jeannie Roberts and Eric Besson of the Arkansas Democrat-Gazette. 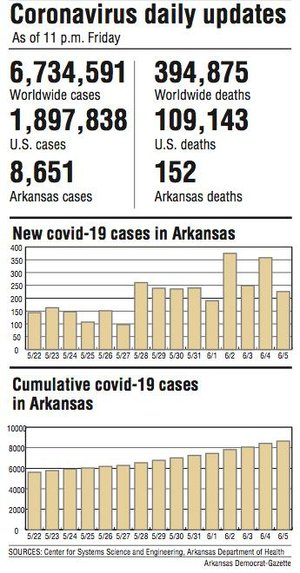