Pentagon disarms the Guard in D.C. 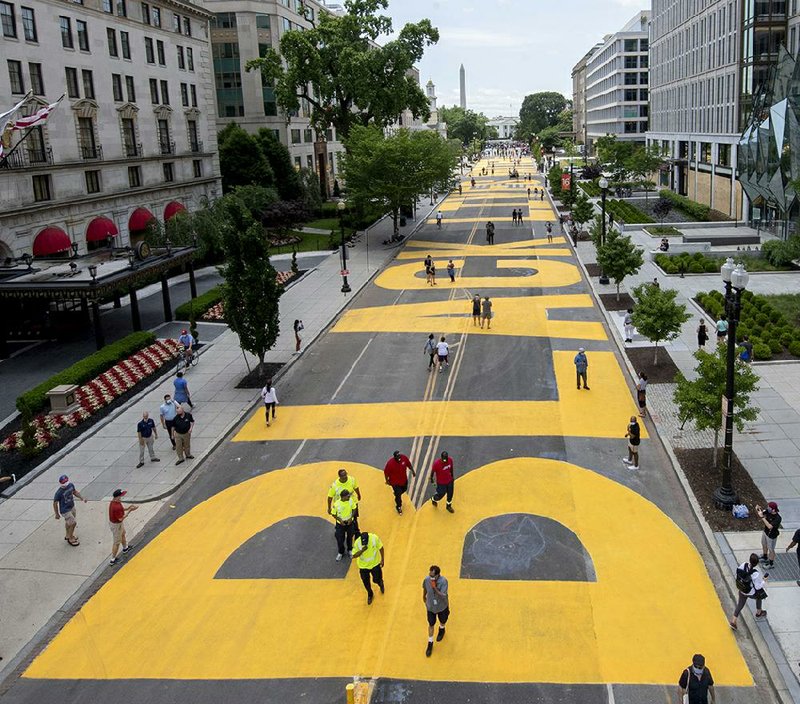 The words Black Lives Matter cover a section of 16th Street in Washington near the Washington Monument and the White House. City workers and activists painted the bright yellow letters together. More photos at arkansasonline.com/66paint/. (AP/Executive Office of the Mayor/Khalid Naji-Allah)

WASHINGTON -- The Pentagon has told National Guard troops deployed to the nation's capital not to use firearms or ammunition, and has issued orders to send home active-duty troops that the Trump administration amassed outside the city in recent days, a sign of deescalation in the federal response to protests in the city.

Also on Friday, Minneapolis, the city where George Floyd died in police custody, agreed to ban police chokeholds and require officers to intervene any time they see unauthorized force by another officer. And in California, Gov. Gavin Newsom ordered the state's police training program to stop teaching officers the chokehold and endorsed legislation that would ban the practice statewide.

According to two senior administration officials, Defense Secretary Mark Esper made the decision to disarm the Guard without consulting the White House, after President Donald Trump ordered a militarized show of force on the streets of Washington to quell demonstrations that were punctured by an episode of looting and violence Sunday.

Initially, a small group of Guard troops deployed in the city had been carrying guns while standing outside monuments, but the bulk of the forces, such as those working with federal park police at Lafayette Square in front of the White House, didn't carry firearms out of caution. Now, all of the roughly 5,000 Guard troops deployed to Washington from the District of Columbia and 11 states have been told not to use weaponry or ammunition.

[Video not showing up above? Click here to watch » https://www.youtube.com/watch?v=0SpG3FdkLJk]

At a news conference Friday, Army Secretary Ryan McCarthy said some Guard troops in the district had been carrying arms Monday, but noted that they did not have magazines of ammunition in their firearms. Beginning Tuesday, the Trump administration deescalated further, he said, by removing firearms from the equation altogether.

"It was clear that there were enough federal law enforcement that had descended on the city, and that would be their principal responsibility," McCarthy said.

The White House was not involved in the decision to disarm the Guard, the two senior officials said, who like others spoke on the condition of anonymity to discuss internal deliberations. The order from the Pentagon comes as federal and district officials prepare for a crowd of an estimated 100,000 to 200,000 protesters in Washington today and as the Pentagon looks to dial back the militarization of the response.

Because Washington is a special federal jurisdiction without the status of a state, the National Guard there is controlled by the president, who delegated his authority over the forces to McCarthy. The district's mayor can request the deployment of the Guard but doesn't have the power to deploy Guard troops herself or control them once deployed. Governors control the Guard in other states.

A senior U.S. defense official said Esper communicated the order to disarm to the Guard in D.C. and other Guard troops earlier in the week through McCarthy and Gen. Joseph Lengyel, head of the National Guard. The order affected only about 10 Guard troops who had been out on patrol with firearms that weren't loaded but with ammunition in their packs, the senior defense official said.

Meanwhile, scores of retired military and defense leaders are denouncing Trump and accusing him of using the military to undermine the rights of Americans protesting police brutality and the killing of Floyd.

The condemnation Friday came in an op-ed in The Washington Post, signed by 89 former defense officials, and in a letter in support of Democratic presidential candidate Joe Biden signed by 55 retired military leaders.

It comes days after law enforcement officers used tear gas and deployed flash bangs to disperse a peaceful protest near the White House shortly before Trump walked to the area. The president also threatened to invoke the Insurrection Act of 1807 to deploy federal troops to quell the protests.

In the letter released by the Biden campaign, leaders including retired Gen. Merrill McPeak, an Air Force chief of staff in the 1990s, called on Trump to stop "tarnishing the military" by deploying its forces against peaceful protesters. They want the president to halt his "divisive rhetoric" and acknowledge the valid grievances of black Americans.

Separately, Trump's former defense secretary, James Mattis, a retired Marine general, and John Allen, a retired four-star general in the Marine Corps, have also denounced Trump's behavior over the protests, with Allen saying the dispersal of protesters near the White House on Monday "may well signal the beginning of the end of the American experiment."

The military leaders who signed the Biden letter say they are heartened by the courage of the demonstrators and by local leaders who have listened to the protesters and acknowledge the legitimacy of their cause.

Trump's insistence on a militarized response in the nation's capital has led to strains with Esper, a West Point graduate and former Army officer who took over as defense secretary last year. Esper announced Wednesday that he wasn't in favor of using the Insurrection Act to deploy active-duty troops, even as the president threatened to invoke it.

Esper also said he was sending home some of the 1,600 active-duty troops amassed outside Washington but later stood down on that decision after a meeting with Trump.

On Thursday, the administration said some of those troops would indeed be leaving, and by Friday, McCarthy announced at the Pentagon that all active-duty soldiers would go home to their bases. The last group to leave will be the 3rd U.S. Infantry Regiment, the "Old Guard" that is permanently based just outside Washington at Fort Myer, Va., he said. As of Friday, all had been ordered to return but not all had departed.

It wasn't clear whether the Pentagon was responding to pressure from the D.C. municipal government in its decision to disarm the Guard and send active-duty troops home. D.C. Mayor Muriel Bowser has been calling publicly for the Guard troops to be disarmed but has also pushed for disarming them in private conversations with federal officials, according to an official familiar with the matter.

McCarthy said he had been "trying to communicate with the mayor," who had expressed frustration about the size of the military response in D.C. and the little information she had received about it in advance. McCarthy said he has been communicating extensively with the metropolitan police chief, meeting five or six times per day on city street corners.

"We're doing everything possible to tighten the coordination," McCarthy said, acknowledging that effectively commanding the guardsmen and communicating has been difficult.

"This has been a very, very challenging time for us," he said.

But federal officials criticized Bowser's administration for resisting the presence of the National Guard units from other states.

Shortly after midnight, Sen. Mike Lee, R-Utah, blamed Bowser for pushing the Utah National Guard and others out of D.C. hotels. On Friday afternoon, Trump accused her of "fighting with the National Guard," without elaborating, in his first tweet criticizing her by name.

The mayor said she did not object to Guard troops staying in D.C. hotels but opposed their stay at the Marriott Marquis, where the city reserved rooms for coronavirus responders. The Utah Guard said it found a different hotel for its 200 service members.

Bowser underscored that the city should not pay for their accommodation. "Those out-of-state troops would be covered either by the Army or their home states, not by D.C. residents," she said.

The mayor has repeatedly said she did not request assistance from other states. But Trump has called up about 3,900 Guard troops from Florida, Idaho, Indiana, Maryland, Missouri, Mississippi, New Jersey, Ohio, South Carolina, Tennessee and Utah to the city, in addition to the roughly 1,200 already activated in the D.C. National Guard.

An internal document compiled for the Joint Chiefs of Staff on Thursday and seen by Bloomberg News provides the most detailed breakdown of federal force numbers and locations as the government seeks to contain protests after the killing of Floyd, an unarmed black man, at the hands of Minneapolis police.

The document, which isn't classified, shows 2,950 law enforcement personnel from U.S. agencies working alongside 2,935 National Guard troops, bolstered by 1,704 active-duty troops who are currently stationed outside the capital at Andrews Air Force Base, Fort Belvoir and Fort Myer.

Protesters in Washington have questioned why some personnel deployed in the capital aren't wearing badges that clearly identify their agencies or their names, an issue Bowser also cited in her letter to Trump. Barr said Thursday that many agents in the federal system don't normally wear badges with their names and that many personnel aren't accustomed to responding to civil unrest.

"In the Department of Justice we do not really have large numbers of units that are trained to deal with civil disturbances," Attorney General William Barr said. "I could understand why some of these individuals simply wouldn't want to talk to people about who they are, if that in fact was the case."

Barr said Thursday that Trump assigned him oversight of the federal response to the protests, which became increasingly violent over the weekend.

The chokehold ban in Minneapolis is part of a stipulation between the city and state officials who launched a civil rights investigation into Floyd's death. The City Council was expected to approve the agreement, which will be enforceable in court.

The country's most significant demonstrations in a half-century -- rivaling those during the civil rights and Vietnam War eras -- resumed for an 11th day nationwide Friday with continued momentum, as the mood largely shifted from explosive anger to more peaceful calls for change. Formal and impromptu memorials to Floyd stretched from Minneapolis to North Carolina, where family members will gather today to mourn him, and beyond.

Josiah Roebuck, a university student who used social media to help gather 100 people to demonstrate Friday in an Atlanta suburb, is confident the momentum will last.

"Once you start, you're going to see this every day," said Roebuck, who has attended multiple protests. "I just want minorities to be represented properly."

Protests across the country had initially been marred by the setting of fires and smashing of windows, but Friday marked the third day of more subdued demonstrations. At a heartfelt tribute to Floyd in Minneapolis on Thursday, the Rev. Al Sharpton outlined plans for a commemorative march on Washington in August, vowing that the movement will "change the whole system of justice."

Floyd's body was being taken to North Carolina, the state where he was born 46 years ago, for a public viewing and private service for family today. Then in Texas, where Floyd lived most of his life, services culminating in a private burial will take place Monday and Tuesday.

In Washington, city workers and volunteers painted "Black Lives Matter" in enormous yellow letters on the street leading to the White House on Friday in a sign of local leaders' embrace of the protest movement.

Information for this article was contributed by Paul Sonne, Fenit Nirappil, Josh Dawsey, Dan Lamothe and Alex Horton of The Washington Post; by Tony Capaccio of Bloomberg News; and by Ben Fox, Corey Williams, Jeff Amy and Adam Beam of The Associated Press. 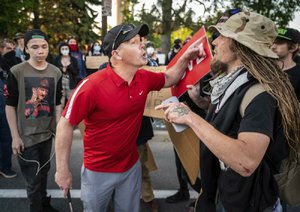 A man holding a golf club challenges protesters along Spokane Fall Boulevard earlier this week in Spokane, Wash. After a brief, angry exchange, he retreated to his pickup and was stopped by police about a block away. (AP/The Spokesman Review/Colin Mulvany) 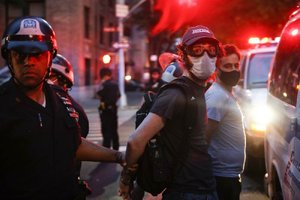