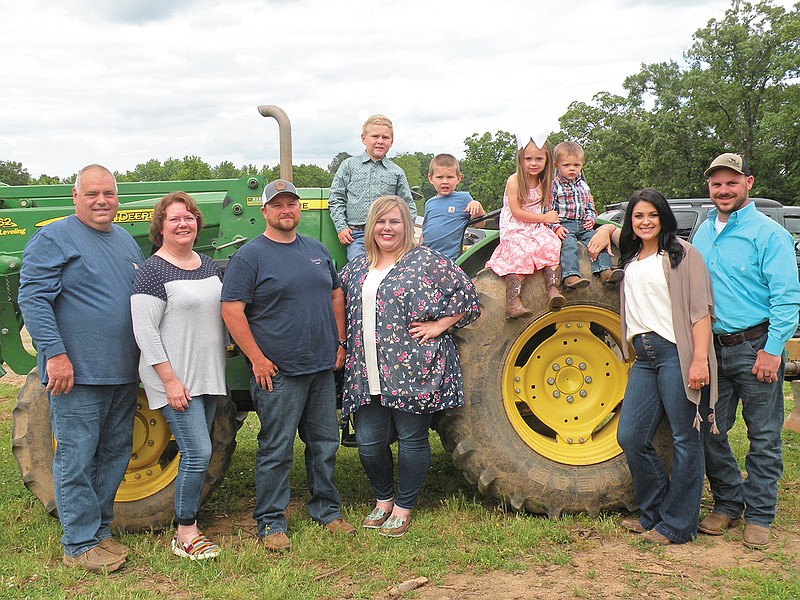 Stevie Duvall, 58, was raised on a farm. He and his wife, Tamara, 57, raised their two children on a farm and now are watching their grandchildren being raised on the same farm Stevie grew up on.

The Duvalls are the 2020 Pope County Farm Family of the Year. They raise hay, chickens and cattle.

Their daughter, Jennifer Duvall Moore, 33, and her husband, Mitchell Moore, 36, have two sons, Tucker, 8, and Tate, 4. Jennifer is a staff auditor for Arkansas Legislative Audit, and Mitchell works for the Atkins Street Department.

The Duvalls’ son, Matt Duvall, 32, and his wife, Paige, 26, have a daughter, Graylee, 4, and a son, Grady, 1. Matt is a pipeline-systems operator for Flywheel Energy, and Paige is a cosmetologist at Expressions Hair Studio in Atkins.

“Not much for talking,” Stevie said when asked how he felt about being named Pope County Farm Family of the Year. “Certainly … I am honored.”

Tamara said she was “surprised” when they learned about the nomination.

“I think it’s pretty special that a small farm like ours is getting honored,” she said.

“We hope to keep the farm in the family,” Stevie said. “Both of our kids and their families live here on the farm.”

Stevie graduated from Atkins High School in 1980 and went right to work as a diesel mechanic, a vocation he continued while still farming until 1994. He is a son of Carolyn Stracner of Atkins and the late L.B. Duvall.

Tamara is a registered nurse at CHI St. Vincent in Morrilton. She grew up in Texas and Louisiana and moved to Arkansas with her family when she was 15. She attended school in the Pottsville School District and received her diploma through the General Educational Development (GED) program. She began nursing school when she was 17 and received her registered-nurse credentials from Baptist Health in Little Rock. She has been a registered nurse for 38 years, serving in numerous roles in hospital settings in both Louisiana and Arkansas.

Tamara is a daughter of Bonnie Cleaver, who lives on the Duvalls’ farm, and Willie Fontenot, who lives in Mississippi.

Stevie and Tamara were married in 1981.

Stevie said he is happy with the size of their farm.

“We are still slowly growing with our cattle herd,” he said, noting that they raised a mixed breed of cattle with Brangus and Angus influence. “But we are about the size we need to be with what I am able to do, along with the help I have.”

Stevie said he has two other people who help on the farm — Greg Nelson and Frank Wenger.

“Greg is also family. … He’s my cousin’s son,” Stevie said. “Frank is a neighbor. Both have worked in all aspects of the farm and are always willing to help when I need an extra hand.”

Stevie said he hopes to complete upgrades to his three broiler

“We also hope to incorporate our children more fully into day-to-day operations in preparation of passing the farm to the next generation,” Stevie said.

The Duvalls also raise quarter horses and, on average, have five head of horses on the farm.

Stevie said if he had to name a hobby, it would be training these horses.

“We have a few horses here on the farm,” he said. “I do trail rides, and we work the cattle with the horses.

“I used to hunt [as a hobby], but most of my time is now spent with the grandkids,” he said, laughing.

The Duvalls’ children worked on the farm when they were growing up. Stevie said he gave them the option to work on the farm and be paid or find a job in town.

“It was their choices, but I paid them well. I was thankful that I had enough work to keep them on the farm, if they wanted to work here … and they did,” Stevie said.

“I was raised on a farm and bought my first cow when I was 7. It was always my dream to farm, and I am proud to be a third-generation farmer. As an adult, I bought 20 acres in 1984 and, over the next 10 years, worked, invested and saved. In 1994, my wife and I made the difficult decision and built two chicken houses instead of a new home. I then quit my job as a diesel mechanic to be a full-time farmer,” he said.

“Over the years, I’ve worked side jobs to earn extra income to build my cattle herd and expand the farm. In 2006, I bought the family farm that I was raised on, which included land and another chicken house,” Stevie said. “Now I get to watch my children raise my grandchildren on the same farm I grew up on, as the fourth and fifth generations to live and work on that farm.”

The grandchildren assist Stevie … they call him “Pop” … as needed.

“They pick up sticks and open gates,” Stevie said. “They also keep an eye on farm activity, check livestock and are all-around future farmers in training.”

The Duvalls are members of Happy Valley Assembly of God Church, where Stevie served as a deacon from 1999-2005.