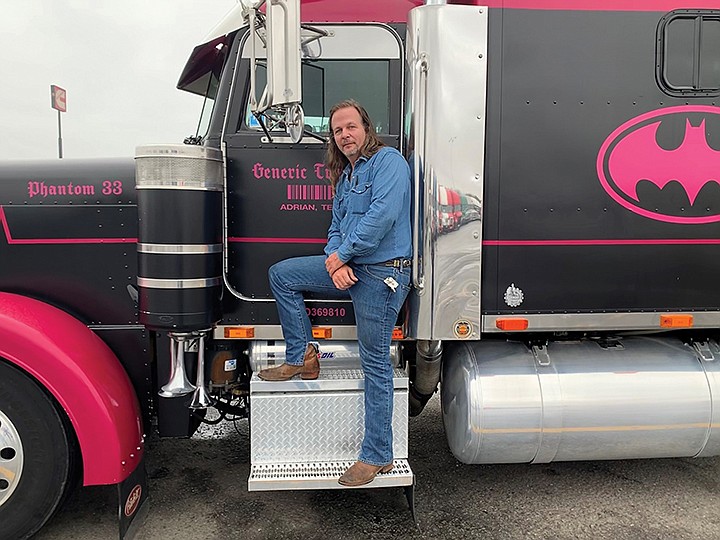 Chad Fowler of Conway stands in front of his 1996 Peterbilt 379 semi, which is custom-fitted with solar panels, as well as the Batman logo. He said everything on his truck holds a special meaning. ( Wendy Miller )

“Everything I have put on this truck holds a special meaning,” Chad Fowler said. “It is not just some random whatever.”

Fowler’s stepson died in 2012, and ever since, Fowler has had the Batman symbol displayed on both sides of the truck, and he has a custom emblem on the front.

“When I put Batman on there, I was married at the time, and my stepson, Sammy Bates, died in a freak accident at just 12 years old,” Fowler said. “I think he was playing a prank on his sister, and it went bad — but he was a good kid.”

One of the biggest attractions on Fowler’s truck is the solar panels that are positioned on top of his sleeper. He also has his dad’s CB panel on both sides of the hood.

Fowler’s dad, Billy Fowler, drove for RA Brooks trucking out of Little Rock for 37 years, off and on, before the company went out of business. Billy Fowler died in 2015.

Chad Fowler said the best part of having his truck is seeing kids wanting to take pictures with it. He said the other day, a pickup sped up to be next to his truck, and one of the kids in the back was trying to take a picture of Fowler’s truck with a cellphone.

“I like that; It makes me smile,” he said. “If it is for the kids, I love it. I was in downtown Columbus, Ohio, doing a trade show, and one guy was taking pictures of his girlfriend in front of the truck.

“I’ve stopped to get fuel, and six people were standing around it. The truck gets attention. I’m not famous, but the truck might be famous. It’s all worthwhile.”

Fowler grew up in Conway. His dad, Billy, drove a truck for 47 years and raised Fowler and his brother. Fowler attended Conway High School but dropped out in the ninth grade to work in a diesel shop. He said he has been around the trucking industry his entire life.

After working at the shop, he worked off shore on an oil rig in the Gulf of Mexico. Fowler said the rig blew up in 2010, a year after he quit working on it.

Fowler drives a 1996 Peterbilt 379 that is custom-fitted with the solar panels.

“Most drivers have a diesel-powered generator, and I wanted to get away from that, so I put a solar-panel system on my truck,” Fowler said. “I don’t have to idle or anything like that. I just park my truck and shut it off, so I think it works better than a generator.

“All my fuel goes toward my trip, and I am not burning a gallon an hour, so it cuts down on emissions and things like that.”

He said that when he originally built the truck, he tried to use a generator, and it was always breaking down, with just one issue after another. The energy from the panels is enough to power his television, cooking equipment and the air-conditioning system. He said he doesn’t know why more people aren’t using solar panels.

“There is no maintenance on the panels. I just have to wash them off. As far as any kind of maintenance, there is a battery bank, which I have to check about once a month or something like that.”

He said one of the common questions he is asked about the truck is what happens if a bird hits the panels. He said they are strong enough to withstand 150 mph winds or even a west-Texas hailstorm. He said he has never had any problems with his panels.

“I created a Facebook page just for the truck and will post pictures of it because people just want to follow the truck. That’s why I made it,” he said. “I’m not an attention seeker. I just built a truck that I liked, and by owning this truck, I wanted to cut down my costs somehow, and these panels have worked for me.

“I would never say I am a tree-hugger or anything, but [I do] anything I can to cut my cost and my emissions a little bit. It’s free energy; why would you not do it?”

Fowler is currently in the process of buying a houseboat to put on Lake Dardanelle, and he said the boat will definitely have solar panels on it.

Since the COVID-19 pandemic, Fowler has been mostly hauling general freight, but under normal circumstances, he assists with household moving and attends truck and trade shows.