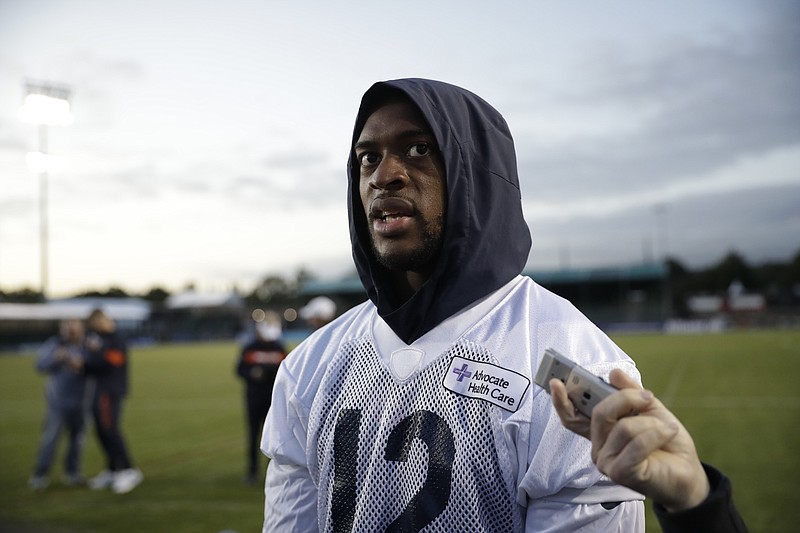 FILE - In this Oct. 4, 2019, file photo, Chicago Bears wide receiver Allen Robinson speaks to the media after an NFL training session at the Allianz Park stadium in London. Many players polled by The Associated Press over the last couple of weeks say they are scared to return to work without a cure or a vaccine for the coronavirus. By and large, however, those same players say they trust the protocols the NFL will have in place by the time practices resume and games return. (AP Photo/Matt Dunham, File)

DENVER -- Seasonal colds and the flu spread through NFL locker rooms just about every year, sending some players home sick while others slog through practices hoping they'll feel better by game day.

In December, the New England Patriots flew two airplanes to Houston to keep the healthy players apart from sick ones, which included seven starters. On the final weekend of the 2016 season, the Raiders were ravaged by a bug that swept through their entire roster and waylaid any hopes of a deep playoff run.

Now, teams have the coronavirus pandemic to worry about.

Offseason workout programs have been entirely virtual since the league closed team facilities in March because of the pandemic. Coaches began returning to their offices Friday but players not seeking treatment for injuries probably won't be allowed to return until training camps open next month.

Many players polled by The Associated Press say they're scared to return to work without a cure or a vaccine for the coronavirus that has infected millions worldwide and killed more than 100,000 Americans. But they're putting their trust in the health protocols the NFL's medical staff is developing for practices to resume and games to return.

Safeguards are expected to include daily temperature checks and frequent virus tests, with sick players quarantined for two weeks.

The only players allowed into team headquarters over the last three months are those rehabbing from serious injuries. One of those is Broncos edge rusher Bradley Chubb, who missed most of last season with a torn knee ligament.

"To be honest, playing football is like my No. 1 goal right now just because of the whole injury thing," Chubb told The AP, "but I feel like when it comes to the coronavirus, the NFL has great leaders in place to make sure we're going to be back in the safest way possible. I know these guys are going to come up with a solution."

That appears to be a common sentiment across the league.

"I'm not too concerned," Bears wide receiver Allen Robinson said. "I think that if we're going to be put back in the facility, I think measures are going to be taken. I think that a plan will be had and I think that enough research and stuff will have been done to put everybody in the best kind of situation."

Robinson said being in a locker room is no different than office, restaurant or factory workers who have returned to their jobs recently under new rules designed to mitigate the spread of the virus that has devastated the global economy.

"People are close upon each other every day that are working together, so I think that as everyone kind of gets back to work, I think that with a good plan ... everything will be fine," Robinson said. "I'm not too worried. It's not anything in my control, so if I'm back in the locker room and back playing, my level of concern will be pretty low."

"It's definitely a concern this year," Mack said. "Every year during cold and flu seasons, they harp on us to get our flu shot. We're aware of the risks of that. It's always in the mind of the team to make sure guys are healthy. You don't want half a team missing practice time. You don't want a bunch of guys sick on game day."

As a rookie in 2009, Mack was clobbered by the swine flu during the world's last pandemic.

"I had to sit home for three or four days, then I had to jump into a game with no practice. It didn't turn out well," Mack said. "That's not what I want to do ever again. This year, it's going to be the utmost concern. Being a novel virus, there's no real history. If you get the flu, people know what happens. You recover and get better. With the coronavirus, there's a lot of scary things going on in terms of a scarring of the lungs and things like that. [So] playing it safe is the smartest move."

Staving off outbreaks is essential for the NFL to play a full schedule this season as planned.

"It's just doing the little things that you already should be doing," Seahawks linebacker Bobby Wagner said. "Hope you taking a shower. Hope you wash your hands. And don't be all up in everybody's face."

What's not an option, he stressed, was ignoring the risk.

The pandemic hit home for a lot of players in April when Super Bowl 50 MVP Von Miller announced he had contracted covid-19. He has since recovered.

"When Von got sick, it was like OK, this thing is serious," Chubb said. "I can't just be out here doing whatever. I've got to make sure I'm staying in my house and doing everything I can to prevent getting this illness and spreading this illness."

"I have been quarantining for a really long time. I even made a drink. It's called the 'quarantini,' " Hicks said, adding that he quit quaffing his tequila-infused creations after reading somewhere that alcohol wasn't the best idea at this time. "But I will say this: It's scary. It's scary to think that most of my job is physical contact. You know what I'm saying? With other players.

"And so, boy, I don't know. I don't know. I want to be safe, and I'm sure that they're going to do their best to make sure we're in the best possible situation on the field to play this game and do it right. But it's scary."