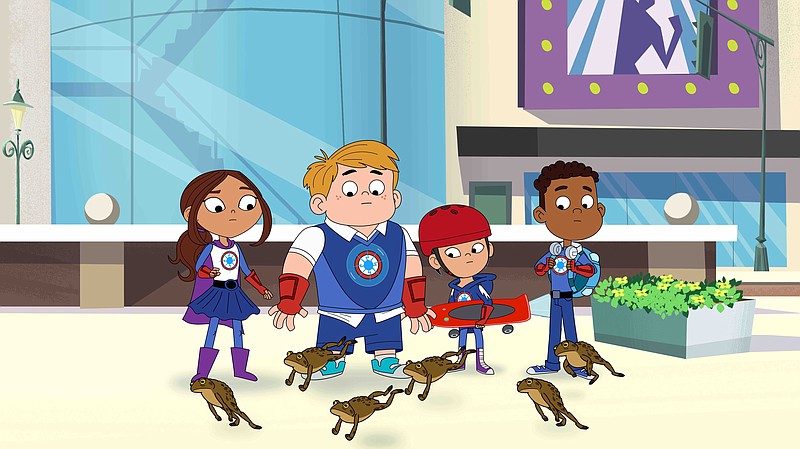 This image released by PBS Kids shows characters from the TV series "Hero Elementary," from left, Lucita Sky, Benny Bubbles, Sara Snap and AJ Gadgets, a superhero who has the ability to make super gadgets – and who also happens to be on the Autism spectrum. The series premieres Monday, June 1 on PBS stations. (PBS Kids via AP)

NEW YORK -- There's a new crop of superheroes on our TVs, but they may need a little seasoning. After all, they're only in elementary school.

The PBS Kids' animated series Hero Elementary, which premiered Monday on AETN, is set inside a grade school where a diverse group of four superhero students is learning to master their special powers.

There's a kid who can fly but is afraid of heights. There's a girl with the power to teleport and a boy who creates force fields of bubbles. Plus there's a boy with an array of cool gadgets who is autistic.

The creators have been subtle about how they've portrayed the character of AJ Gadgets, who is on the high-functioning end of autism. AJ doesn't like loud noises or wet clothes or to be apart from his beloved backpack. But he's part of the team and always comes to the rescue.

"We feel like there is so much strength in the idea of portraying a kid on the spectrum as just one of the kids and not making a huge deal about his autism," said Christine Ferraro, who co-created the series with Carol-Lynn Parente.

The series leans into scientific principles as the characters confront various missions, like dealing with a huge ball rolling through the city, or taking care of a just-hatched baby swan. A helpful teacher encourages them to keep finding solutions even if they don't succeed at first, teaching such skills as observing, investigating, testing and predicting.

Linda Simensky, head of content at PBS Kids, said she was drawn to AJ's inclusion and the show's message of kids solving their own problems.

"A lot of people pitch shows where there's an expert and kids just go to the expert and ask how to do things," she said. "And we have done everything we can to stay away from those kinds of shows. The adults in our shows always say, 'Well, you know, that's a good question. How do you think we should get to that answer?' And they tease it out of the kids, which is how it often is in real life."

Ferraro and Parente are longtime veterans of Sesame Street, which in 2015 introduced Julia, a 4-year-old girl Muppet with autism. They didn't initially intend to have a child with autism on Hero Elementary, but as they fleshed out AJ's character it started to make sense.

"It just kind of came about in an organic way like that," Ferraro said. "For the most part, it's not the focus of attention at all. He's just one of the gang. And that's something that we don't see a lot on television. And that's why we thought it was really important."

AJ's teammates are aware of his needs and preferences -- in one episode they desperately search for his lost backpack -- and the show's creators hope the show can teach empathy and normalize the idea that all kids are different.

"I think it models how you can, with a few adjustments, adjust to a friend with different needs, whether it's autism or anything else," Parente said.

The series is designed for children ages 4-7 and is available on PBS stations, the PBS Kids 24/7 channel and PBS Kids digital platforms. Each episode runs about 11 minutes, with vibrant colors and a zany touch.

"Even though babies may not look egg-zactly like their parents, it is egg-cellent when families are together," quips the heroes' teacher, Mr. Sparks. "OK, enough egg jokes."

Viewers familiar with autism and the signs of autism might pick up on AJ's behavior, but the creators are fine if other viewers don't notice. They've purposely not directly addressed autism except for a double episode slated to run later in the series. Most of the time they just want him to be part of the group.