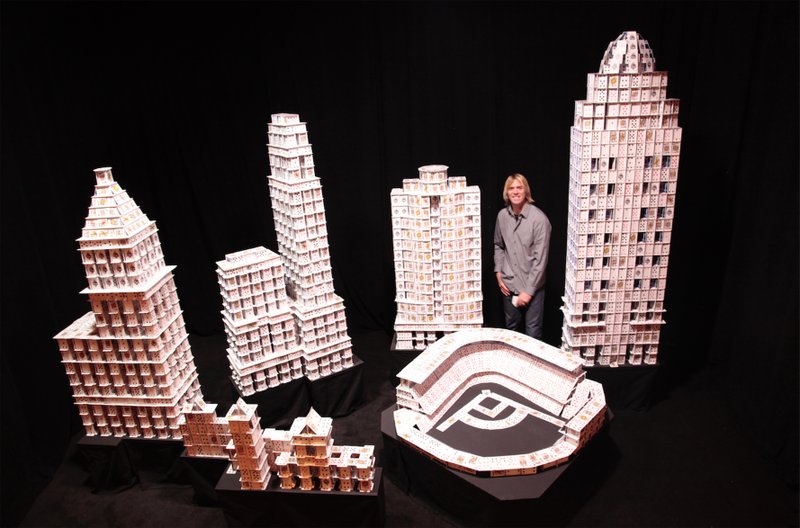 Bryan Berg is a cardstacking legend from Iowa. He began stacking cards with his grandfather when he was about 8 years old, building regular boxlike "houses," with difficulty. But Berg kept at it, and today he holds the Guinness World Record for the largest playing card structure and the tallest house of cards.

He set the Guinness record in high school. Since then, he has broken his records "around eight or 10 times each," he says.

As a professional cardstacker, Berg, who's 46, creates card structures around the world. Some are 12 stories tall. They're so sturdy, they can hold a cement brick or withstand the force of a leaf blower, yet he never uses glue -- nothing but thousands of regular playing cards. He constructs domes, spirals and spires: Cinderella's castle from Walt Disney World, New York's Empire State Building and the Guggenheim Museum, as well as these Washington landmarks: the U.S. Capitol, the Lincoln Memorial and the Washington Monument.

You don't need anything special to build a masterpiece, Berg says. Any old deck of cards works. Index cards or recipe cards are fine, too. Here are his tips:

1. Find a flat, hard surface that's not slippery. "A large cutting board, a wood floor or tabletop are ideal," Berg says.

2. As you build, focus on joining cards using right angles, not triangles, which don't hold up. Berg recommends building in a simple pinwheel pattern he uses as the basis for all his structures.

Build with your dominant hand. First, put two cards together in a T-shape. Hold the first card horizontally flat on the surface with your dominant hand. Set other hand on the table to make a T with card Number 2. Don't let go with the second hand, but do let go with the first hand. Add the third card and then fourth card in a pinwheel shape until you have a little square.

Lean the cards in a little toward one another for support. That means there should be a tiny gap between the bottom edges of cards next to each other.

Then add cards, forming more T shapes, to make a grid. Next, lay cards flat on top as a roof, then add a second story.

3. Don't strive for perfection. "Just focus on getting more cards to stand than to fall" and keep building, Berg says.

4. Cards will fall as you build, but don't use your fingers to pick them up. Use the edge of a loose card and one finger instead, so you don't knock more down.

Berg's biggest piece of advice is not to give up.

"You have to earn it, a little bit," he says. Cards that fall can feel a little disappointing, at first.

"If you keep trying, anyone can do this. Stacking cards to a level that will thrill you, several stories tall, takes just a couple of afternoons of practice," Berg says.

"Like learning to ride a bike, all of a sudden something clicks, and you take off the training wheels" and just keep going.