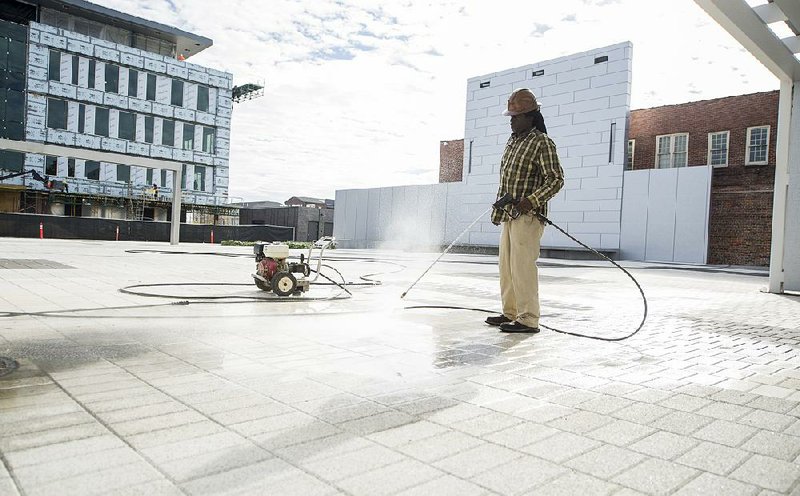 The North Little Rock City council unanimously approved Monday an ordinance to establish an entertainment district downtown as quickly as possible in an effort to boost the economy during the covid-19 pandemic.

The Argenta outdoor dining district ordinance allows restaurants, bars and breweries within the entertainment district to sell alcoholic beverages that may be taken out of the establishment and consumed within the district's boundaries between 10 a.m. and 10 p.m. daily.

The creation of an entertainment district in the Argenta area will help promote an atmosphere that highlights restaurants, entertainment and hospitality options, the ordinance states. Boundaries of the district include Main Street and portions of Poplar Street, East Fifth Street and West Fourth Street. No outside beverages will be allowed in the area.

The North Little Rock Convention and Visitors Bureau will have the right to exclude Argenta Plaza during specific times, the ordinance states.

City Attorney Amy Fields said officials will still have to notify the Alcoholic Beverage Control Board and accomplish some preliminary details when it comes to signage and marking before the entertainment district is officially opened.

"We are trying to get it rolled out as quickly as possible," Fields said.

"We all want to help and support our restaurants, which are fighting to keep doing what they want to do, and this is to serve great food to their customers," Major said.

Mayor Joe Smith also told council members he was allowing restaurants for the next four months to create outdoor dining without getting additional zoning or planning.

"We want to help [restaurants] out as much as we can and let them make a dollar," he said.

"We want restaurants to check and make sure they are complying with state laws as well," she said.

Fields said North Little Rock will not require branded cups or wristbands for its entertainment district.

"My understanding is that we didn't want to do anything that might slow this process down," she said. "We want to get this out and help our businesses as quickly as we can."