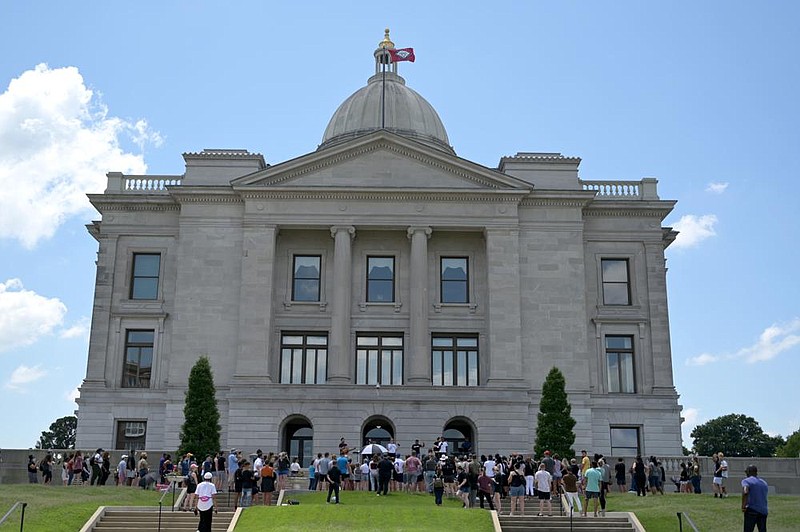 People from New Life Church gather on the side of the state Capitol in Little Rock during a protest over the killing of George Floyd on Sunday, June 7, 2020. Protesters sang songs of praise and observed a moment of silence.

Daily protests that persisted for more than a week in Little Rock subsided Monday amid inclement weather, with only a small gathering outside a police substation where the police chief addressed demonstrators.

Little Rock Mayor Frank Scott Jr. said during a Monday morning news conference that over the weekend he asked Gov. Asa Hutchinson to reduce the police presence in the capital city and to shift the Arkansas National Guard back to normal duties, and the governor had agreed.

"We are glad that that request was honored," Scott said.

A combined force of federal, state and local police agencies has monitored and arrested protesters in Little Rock since Hutchinson signed an executive order June 2 after three nights of demonstrations against racism and police brutality in the wake of the death of George Floyd in Minneapolis.

Floyd died in police custody May 25 after officer Derek Chauvin pinned him to the ground and knelt on the side of Floyd's neck for more than eight minutes. Widespread video of the encounter sparked protests across the nation.

When asked at his news briefing Monday about the unified police command structure, with the Arkansas State Police leading the response under his executive order, Hutchinson said the command structure will remain in place but that the state will reduce the number of units and officers who are deployed.

The governor said he had spoken with Scott, who indicated that Little Rock police would be out protecting protesters as well as property.

"Let me emphasize, the protesters have really done a nice job of articulating their message, but also making sure that they're not a part of any violent or destructive activities," Hutchinson said.

Little Rock officers used a total of 115 oleoresin capsicum pepper balls over those two days -- 85 the first day and 30 the second day, according to a Police Department count. Pepper balls can be fired as a projectile to deliver a chemical irritant akin to pepper spray.

Police also used one smoke grenade May 30 and one canister of white smoke May 31.

The department said it did not use CS, the most widely used type of tear gas. On the morning after the first night of demonstrations, Scott emphasized that point to reporters; however, the effects of pepper balls are similar to tear gas.

Rainy weather on Monday seemed to tamp down protest activity in Little Rock. As of Sunday, the city had experienced nine consecutive days of demonstrations.

The exchange, filmed by activist Dawn Jeffrey on Facebook Live, was occasionally tense. In the video, Jeffrey can be heard shouting over Humphrey, and at one point a few other demonstrators briefly chant, "no justice, no peace," seemingly to drown out the police chief.

Demonstrators gathered outside the substation on behalf of the family of Tyler Ashford, a teenager who was shot and wounded by Little Rock police in 2019. Police accused Ashford of fleeing and firing a handgun at an officer who stopped him while Ashford was walking on the street.

Although he later surrendered at the hospital, Ashford disappeared in March and was found dead of a gunshot wound in the head, but the exact circumstances of his death remain unclear, according to his mother, Tiffany Patton. Ashford was 19.

"I get your frustration," Humphrey told the people gathered outside the police station. "I get the fact that you lost your loved one. I can't bring him back. I wish I could, OK? I apologize for that."

Humphrey tried to explain the limitations of his role as chief.

"I just can't fire people," Humphrey said later, according to the video of the exchange. "I can terminate somebody, I can discipline somebody..."

"And the judge can let them back," a demonstrator replied, a likely reference to officer Charles Starks, who was reinstated by a judge after Humphrey fired Starks following the fatal shooting of motorist Bradley Blackshire in February 2019.

The discussion turned to the residency of police officers who do not live in the area where they patrol. The police chief said that with the exception of Chicago and a few other cities, demonstrators cannot find any police departments that require officers to live in the cities where they work.

Jeffrey replied that residents don't need so many officers in the community.

"One thing I'm not is a liar," Humphrey said.

Jeffrey did not respond to a request for comment.

When asked about her impression of the conversation with Humphrey during an interview Monday afternoon, Patton said it was "overall fair."

"He didn't lie," she said. "He answered all the questions."

Humphrey said during an interview Monday that he thought the tone of the discussion was "very positive."

"It was a proactive approach by myself," he said. "I'm trying to make contact with as many protesters as I can. I want them to know that I hear them; I understand their concerns."

"A lot of times they don't understand the process when it comes to discipline for an officer, and so I explained that," he added.

Humphrey also did more listening than talking with the activists, he said.

Based on his understanding of demonstrators' demand to defund police, Humphrey said they do not want to eliminate the police but rather redirect some department funding toward community programs.

Demonstrations against police brutality in Little Rock have taken place during a tumultuous period for the chief and the Police Department.

Last month, Scott said he was forming a committee to review practices in the Police Department amid mounting lawsuits that named Humphrey and accused him of retaliatory behavior. The mayor announced the members of the review committee Monday.

On May 31, the day after the first demonstration for Floyd in Little Rock, Humphrey emailed Police Department employees and told them that he had never been more embarrassed in his career than when he saw the "segregated LRPD" on display during the protests.

Last week, the Little Rock Fraternal Order of Police announced that more than 83% of the union's members voted for a resolution expressing no confidence in Humphrey. Humphrey also met with demonstrators last week at the Capitol.

Humphrey said Monday that he was "literally sick" when he saw the incident that led to Floyd's death.

"I understand what the community is asking," he said. "I understand the frustration and the anger, and I wanted them to know that I'm listening," not just hearing them.